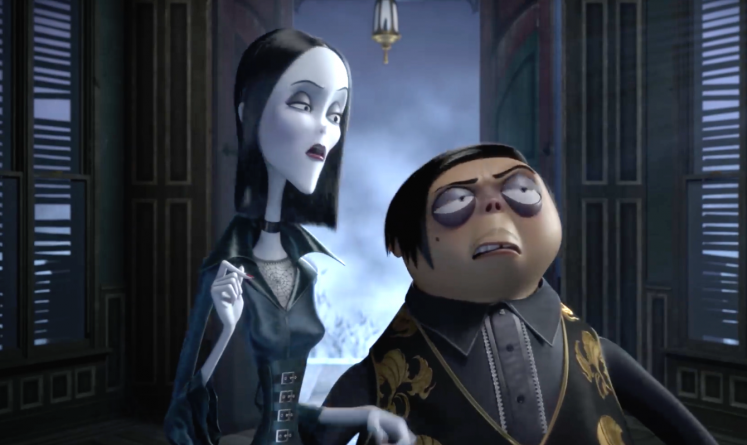 Somehow, Tim Burton never got the chance to ruin the Addams family. But like so many of the death-defying hijinks that the altogether ooky clan has indulged in over the years, it was a near miss. Burton was originally tapped in 2010 to make a stop-motion adaptation of Charles Addams’ original drawings, but the project was ultimately scrapped. Despite first appearing in the single-panel New Yorker cartoons over 80 years ago, it’s taken until 2019 for an animated version of The Addams Family to hit the big screen, and while their latest iteration offers a vivid visual aesthetic and whimsically macabre antics all based on those original character designs, the story can’t keep up.

Boasting an impressive A-list voice cast, the PG-rated film manages to pack in plenty of snappy dark humor that nods to the adults in the room, even if that often involves somewhat disconcertingly throwing modern technology into the mix. Thing, the family’s disembodied hand, is caught looking at sexy images of feet online in one of the film’s best gags. The always gloomily intense Wednesday (Chloë Grace Moretz) is impressed by a newfound friend’s social media-clotted smartphone because her own “vanity mirror” can only contain a maximum of 14 captured souls. Uncle Fester (Nick Kroll) unnervingly brags about his ability to clandestinely sleep entire nights in the attics of strangers’ homes. Lurch plays Booker T. and the M.G.’s “Green Onions” on the organ and later sings an unexpectedly falsetto version of R.E.M.’s “Everybody Hurts.” There’s a blink-and-you’ll-miss-it reference to the iconic ending to 1978’s Invasion of the Body Snatchers and a timelier (and more heavy-handed) reference to the red balloon in Stephen King’s It.

In fact, it’s the red balloon that sets the film’s flimsy plot into motion. After we’re introduced to the newly wed young Gomez (Oscar Isaac) and Morticia (Charlize Theron) getting chased out of town by torch-wielding villagers, they characteristically decide to relocate to the most dreadful place they can imagine: New Jersey. Flash forward to the family as we know them, with Wednesday and Pugsley (Finn Wolfhard) in tow, and the Addamses learn about a pastel-hued suburban utopia called Assimilation that’s formed in the valley below their creepy mansion. When a stray balloon, along with windblown confetti from a home renovation reality TV show reveal, drifts up to the Addams estate, Wednesday—despite constantly wearing her hair in noose-shaped braids—begins to realize that being forced to conform to her parents’ gothic sensibilities is just as repressive as the mainstream.

Unfortunately, The Addams Family loses a great deal of steam when its reasonably amusing cavalcade of oddball gimmicks gives way to a ham-fisted message about going against the flow. The home renovation TV show host (Allison Janney) makes for a listless villain, and the film’s entire third act somehow ends up oscillating between slapdash and contrived. Aided by the incorporation of original character designs, the film remains visually compelling throughout, even if it can’t help but feel a bit Burtonesque at times—especially with Gomez, who bears that distinctively Peter Lorre-ish look of some characters in Frankenweenie and Corpse Bride. Nevertheless, the animated format is especially compatible with the Addams’ more raucous, cartoonish antics. But an underwhelming story and hit-or-miss jokes ultimately doom The Addams Family, not that they’d mind that in the least.