Venice, with is stunning Basilica and serpentine canals, has always played magically on the screen. From Don’t Look Now to The Wings of the Dove, the Italian city is almost a character in itself. Perhaps Luchino Visconti filmed the city best in his 1971 adaptation of Thomas Mann’s novella, Death in Venice. When the film opens, we approach the Floating City by steamer. Gustav Mahler’s Fifth Symphony plays as Visconti takes it slow, painting the arrival in what feels like real time.

Visconti was no stranger to literary adaptation. His arguably most popular film, The Leopard, was taken from the novel by Giuseppe Tomasi di Lampedusa. But with taking on Mann’s brief 1912 novella, the director had to solidify some of the more slippery themes in the story’s written form. On the boat, we meet Gustave von Aschenbach (Dirk Bogarde), a sickly composer on leave from Germany. In the book, Aschenbach is an author who comes to Venice and becomes infatuated with a teenaged Polish boy named Tadzio. And while Mann could couch his character’s pederasty in treatises about art and beauty, leaving the clever reader to root out the homosexuality that drifted beneath his sentences, Visconti is much more upfront about his protagonist’s predilections. 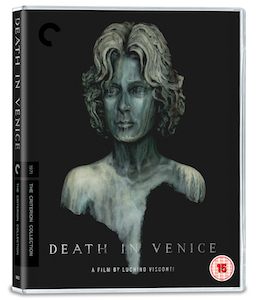 If the film’s subject sounds uncomfortable, Visconti does little to soften the creepiness of Aschenbach’s lusting after Tadzio (15-year-old Björn Andrésen), even if there is never anything more than a glance that passes between them. This is not Call Me by Your Name by any means. Instead, Visconti directs Bogarde in a career-best performance that is nuanced, quiet and sadly tragic.
This tale of forbidden love, released decades before the taboo of gay characters on the screen abated, is mainly chaste except in the mind of Aschenbach. Tadzio is aware of the older man’s gaze, yet does nothing to engage with the musician. In Aschenbach’s fantasy, he places a loving hand on the boy’s head but does nothing else. Yet, Death in Venice is still difficult to watch for the way Visconti and Bogarde delve deep into the naked sadness that ultimately consumes the composer.

Much of Death in Venice is wordless, bordering on impressionistic. Visconti fills in Aschenbach’s history with short flashbacks, including arguments with a colleague about art and beauty and the family he leaves behind in Bavaria. Visconti purposefully dressed Bogarde up to look like Mahler in his tiny spectacles and dandy-like dress. A lot of the film simply follows the composer as he lounges in a posh hotel, wanders around a fetid Venice gripped in a cholera outbreak, or resting on the beach in a white suit as he watches Tadzio wrestle and embrace other boys his age.

It is interesting to note that the three men who created the film all lived as homosexuals in epochs when gays lived closeted existences. Mann, married with six children, lusted after young men and boys in his diaries and based Death in Venice on a similar encounter he once had with an 11-year-old boy while traveling. Visconti was gay and was involved with his frequent star Helmut Berger. Meanwhile, Bogarde lived with his partner Anthony Forwood and refused to enter a sham marriage like many other gay leading men of the era, likely costing him many plum roles.

Visconti’s Aschenbach is not a figure of strength or gay pride, however. Near the film’s end, he receives a ghastly makeover from a barber that see his graying hair dyed brown and a pallor of white foundation applied to his face and red lipstick to his mouth. Dying of cholera, Aschenbach looks like the walking dead. He dies on while watching Tadzio on the edge of the sea, black dye drips down his sweaty brown. It is a pitiable ending for a pitiable character consumed with forbidden desires.

Yet, a bigger phantom hangs over Death in Venice. While we focus on the microcosm of Aschenbach’s desire, Visconti drops hints of a continent about to enter the First World War. As the beauty of Venice crumbles towards the inevitability of destruction, Aschenbach is still able to recognize Tadzio’s beauty as he expires, the folly of his hopeless desire carrying him over the gorgeous Adriatic horizon, his last few moments echoing those of a Europe that is about to be irrevocably changed.