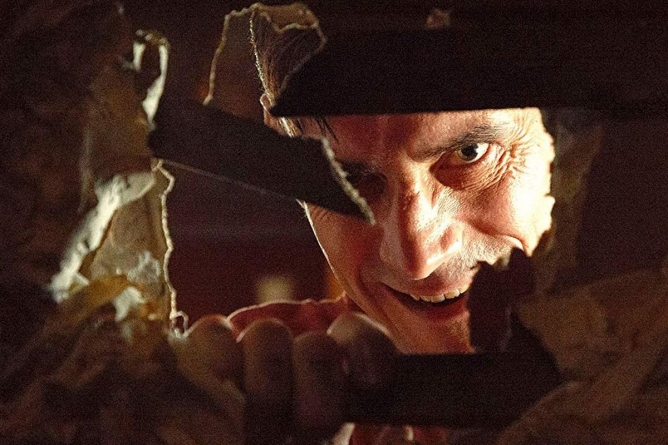 Girl on the Third Floor is a compellingly campy haunted house flick that borrows heavily from elements of The Shining while effectively breathing some new life into other common horror movie tropes.

Whether it’s the final girl or the gritty antihero, the plucky kid or the steely old-timer, the horror genre often gives us someone to root for amid the mayhem. For every axe-wielding Jack Torrance stalking through a frozen hedge maze, there’s a Danny and Wendy escaping down the mountain in a snowcat. Not so in Travis Stevens’ Girl on the Third Floor, a compellingly campy haunted house flick that borrows heavily from elements of The Shining while effectively breathing some new life into other common horror movie tropes. And yet, one can’t help but root for the ghouls to give the awful main character what he has coming to him.

After dodging a bullet and escaping prison time for some slimy white-collar malfeasance, the appropriately surnamed Don Koch (C.M. Punk) looks to reset his life by escaping Chicago and fixing up a decrepit old house in the ‘burbs. With his breadwinning, pregnant wife, Liz (Trieste Kelly Dunn), waiting back in Chi-town, Don sets to poking around the fixer-upper and attempting to repair its many quirky maladies. Viscous fluid oozes from outlets. A malignant-looking swath of black rot turns a wall mushy and porous. A ceiling collapse reveals a creepy, secret third story. More strangely, marbles emerge from nowhere and go rolling about creaky hardwood. Don takes all this in stride, sleeping on the floor, listening to terrible music and chatting up foreboding locals when he’s not busting his hump to get the house in order. When a seductress named Sarah (Sarah Brooks) mysteriously appears and hops into bed with him, Don justifies the tryst by claiming he’s “earned” it.

Around this point, the film veers into Evil Dead II-style camp, not least of which when a torrent of black fluid gushes into Don’s face, rendering him into a near spitting image of a gore-streaked Ash Williams. Sarah won’t go away, and her increasingly menacing presence begins taking on shades of Fatal Attraction. When Don bludgeons her to death to avoid being found out, the supernatural stakes get raised and the living, breathing house begins to unleash malevolent chaos. As the horror grows increasingly insidious and Don becomes grievously wounded in both mind and body, the viewer is left satisfied by this comeuppance. After all, as Liz inevitably shows up unannounced and candidly tells a snoopy local pastor (Karen Woditsch), Don is a “fuckup.” An alcoholic philanderer who bilked financial clients, Don is also a murderer who gaslights his pregnant wife and doesn’t feel a speck of empathy or remorse for any of these actions. Better that the house eats him.

But in its third act, Girl on the Third Floor nearly snatches defeat from the jaws of victory. Humorous, unsettling and compelling in turns, the film shifts gears late to try to establish Liz as a persevering heroine. Unfortunately, it has already spent much of its runtime mitigating her to a two-dimensional character: quite literally a face on a smartphone screen with little more to say than nagging Don to hire a professional. Her eventual physical appearance at the house is too little, too late to establish her character, and it makes even less sense she’d still be married to such a horrible human being. The film’s intensity flags as a result. Instead, the only characters to root for here are the supernatural ones, and Girl on the Third Floor works best in those moments when evil forces steadily give Don the fate he deserves.