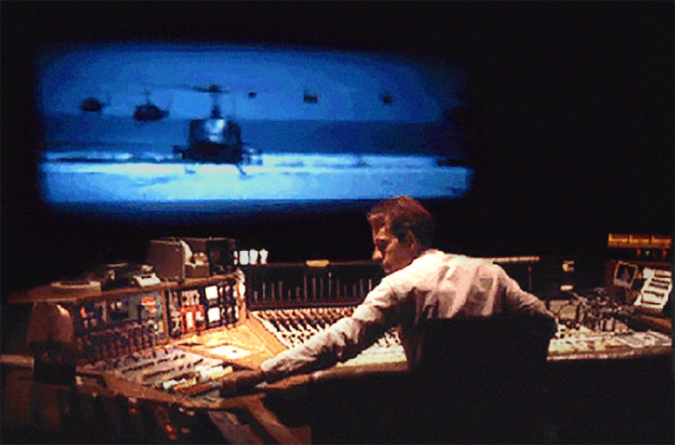 After Star Wars took over the culture in 1977, a documentary appeared in prime time that showed the making of the phenomenon. Memory blurs most of what was shown, but there’s an enduring image of Ben Burtt, future Academy Award winner for sound design, wearing a headset. Striking a taut steel cable with one hand, he holds a mike in his other hand to capture a sound that generations would recognize as the shot of Han Solo’s blaster. After seeing this display of ingenuity you could never pass a telephone pole and look at those anchoring cables the same way. This clip appears in director Midge Costin’s surprisingly moving documentary Making Waves: The Art of Cinematic Sound.

Costin and screenwriter Bobette Buster structure the film as equal parts philosophy seminar, history class and vocational rally, making the rare Hollywood doc that forces you to reconsider your career choices. Unlike Score, a 2016 film that focused on film composers, Making Waves illustrates the many departments that contribute to the crucial sound of cinematic alchemy. Music, sound effects and voice form what Jurassic Park and Toy Story sound designer Gary Rydstrom calls “the circle of talent,” structured like the sections of an orchestra that is as essential to film as the image.

Walter Murch, a founding member of Francis Ford Coppola’s independent studio American Zoetrope along with George Lucas and the sound designer of Apocalypse Now, opens the film positing that hearing is the first human sense to go online. In the third trimester, a baby hears her mother’s heartbeat and the muffled sounds of the world beyond the womb. This biological fact creates a deeper emotional resonance when sound is used to manipulate an audience during a dramatic experience.

Returning to Star Wars and the emotional memory of a child of the ‘70s, think about what happens after the scroll and John Williams’ initial score. The rebel ship flies into the screen followed by the endless, oppressive Star Destroyer. But what about the sound? Williams fills the theater with percussion and brass while Burtt gives us the sounds of lasers and explosions like we have never heard before. The engine of the rebel ship is as distinct as the Star Destroyer, which overtakes the screen like a rumbling glacier. Ships fill the screen while sound fills the theater, and without a word spoken, the viewer understands the stakes. All the sequels, merchandise and theme parks that would follow were birthed in that moment. Williams, Burtt and their colleagues stamped generations with their collective genius. If you were there for the beginning of Star Wars, they hooked you with an opening that still resonates 40 years later. The image may be indelible, but you feel the sound of the massive engines of that Star Destroyer in your bones.

Cinematic sound comprises more than blockbuster filmmaking. Even the films of Robert Altman are noted for their use of sound, in his case, a more subtle ambient design. This poses its own challenges. Recording sound in the outdoors is probably the messiest process in filmmaking, no matter the quality of the microphones. How does one create a soundtrack convincing enough that audiences believe it was recorded on set? How does one create a credible silence? Costin includes a wonderful sequence about Ordinary People, Robert Redford’s Oscar-winning directorial debut. Silence was meant to represent pain between the characters, but it provided real pain for Kay Rose and the other sound editors who had to strip away all the extraneous noise at the film’s various locations and construct an ambience that somehow felt more natural.

Costin’s film charts the evolution of a process that coincides with developing technology. Shots of people sitting behind impressively large mixing stations fill the film, but the director makes it a point to show us how these craftspeople are working with the tools of emotion. There are sequences where the sound is stripped away to show the nakedness of an image without auditory context. But a montage of famous movie clips simply clogs your throat with emotion when taken all at once. As fans of films we are conditioned to credit directors, stars and even writers for the quality of a film, with sound as an afterthought. But filmmakers like Spielberg, Streisand, Francis Ford and Sophia Coppola, Redford and so many others are profoundly aware of the importance of their sound departments. To paraphrase David Lynch, people always talk about how movies look, but never how they sound. Making Waves may well change that.