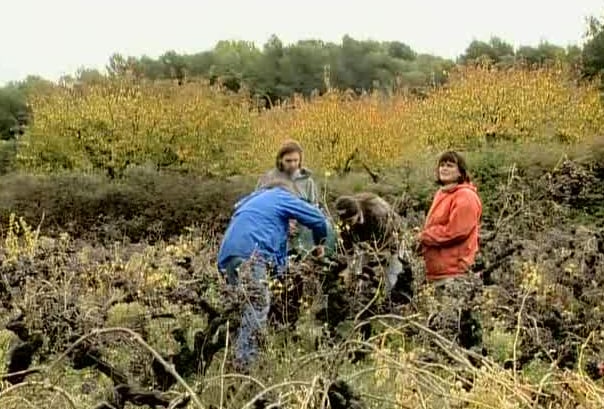 Varda tracks down some of the subjects of The Gleaners and I to see how they are getting along and tends to find people mostly the same, albeit somewhat changed by exposure or their own determination to improve.

When Agnès Varda directed The Gleaners and I on cheap, consumer-grade cameras, she could never have guessed that her political but playful documentary would launch her into the greatest level of fame she had ever enjoyed in five decades of filmmaking. Invited onto news programs and chat shows and bathed in plaudits, Varda found herself at the center of such interest that she created an hourlong follow-up to the film, subtitled Two Years Later. Having already made herself a core element of the previous movie, Varda wastes little time acknowledging the impact that The Gleaners and I had on her life, including a montage of festival awards she received for it before amusingly announcing “show’s over” after scanning over the last of the trophies and medals. But the director spends far more time poring over the dizzying amount of fan mail she received in response to the film, from effusive letters of thanks to, fascinatingly, a trove of homemade art of irregular postcards and scrapbooks. Varda recounts these gifts with delight, and she is also audibly moved by the outpouring of responses, and her inability to get to all of the thousands of letters and packages sent to her.

One piece of mail in particular catches her eye, however, a homemade, doodle-heavy postcard crafted on a train that so charms the filmmaker that she resolves to visit the couple who sent it to her. She does indeed track down the couple and takes a train out to meet them, reminiscing about her own childhood art, a crudely animated short she made as a teenager about a railroad bridge being destroyed by a bomber. Varda’s memories and presence were a major element of the preceding film, of course, but here, unmoored from the social urgency of The Gleaners and I’s core message, she falls even heavier into her own headspace, both in her frequent reflections and the outward connections she continues to make through the first film and this successor. She fawns over Philippe and Delphine, the pair who sent her the postcard and who have converted an old butcher shop into a workspace, so observant of their humble quirks that she calls out the soft manner in which Philippe reads aloud or how Delphine subconsciously turns her hands upward as if in religious offering. Much of the film is devoted to such tender observations, which in their own way demonstrate how Varda’s keen aesthetic eye serves her well as a documentarian, following tiny visual cues over sticking to a narrative agenda.

Naturally, Varda tracks down some of the subjects of The Gleaners and I to see how they are getting along and tends to find people mostly the same, albeit somewhat changed by exposure or their own determination to improve. Alain, the smart, charitable (if slightly prickly) gleaner, still combs markets for refuse, now something of a local celebrity. He reiterates his criticism voiced in the first film that Varda made herself too much of a focus, but can also be quite warm when approached by others who recognize him and are inquisitive about the gleaning lifestyle. Elsewhere, we see Claude and Gislaine, the cantankerous, alcoholic couple, separated but each starting to gain a foothold on stability: Gislaine with relative sobriety and a new relationship, Claude with temporary lodging gives way to an extended and restful stay in a shelter where he becomes visibly healthier. People still deal with their demons (Claude clearly struggles to stay sober, the passionate François mentions being institutionalized for a time for his erratic behavior), but for the most part they are in more stable places, not necessarily because of Varda’s film but the simple ups and downs of life.

As she did with the preceding film, Varda uses Two Years Later to continue to play around with the possibilities of form with new camera technology. The film begins by running all of The Gleaners and I on fast-forward, an amusingly Godardian gimmick (Godard himself would later up the ante by playing the entirety of a sped-up Film Socialisme as its own trailer), before Varda presents a number of still images from the movie on a giant board. Celluloid film uses space to represent time, but Varda, pulling photographs from the digital cinematography, arranges them outside of linear movement, positioning shots in a simultaneous representation where one can follow images in any order. Varda continues to use the small camera to obtain intimate, unguarded close-ups without being intrusive, allowing her to capture her own impressionistic view of people and places and what catches her eye.

That foregrounding of the director’s POV retroactively clarifies The Gleaners and I as the pivot point for Varda’s twilight period, in which her filmmaking shifted toward a kind of playful reverie and unreliable autobiography. Varda notes how the various translations of the previous film’s original title, which rendered her in the third-person as an anonymous “glaneuse,” in the first-person of the English release or the identifying subtitle of the Japanese translation, made her the subject as much as the gleaners, befitting the film’s split interests in others and herself. Varda’s reflections are witty and lighthearted, but Two Years Later does find moments of tender self-revelation, as when the filmmaker mentions that a friend pointed out that the close-ups on her hair and hands in The Gleaners and I recalled how she filmed her late husband, Jacques Demy, in Jacquot de Nantes. Varda recalls crying at this observation, not realizing the subconscious act of continuity until it was pointed out to her, though everyone close to her thought the connection so obvious as to have been deliberate. It’s here that Late Varda truly begins, though for all the talk of how the director became something of a meme in her final years, here one can see how ably (and critically) she turned her inquisitive, subtly probing eye on herself.