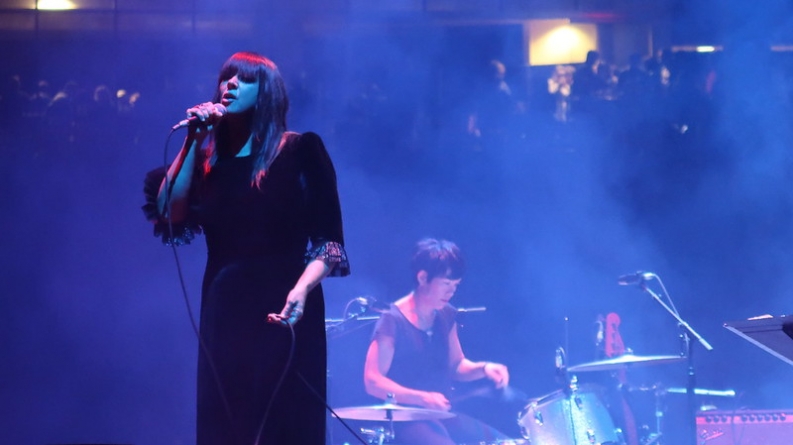 The concert felt more wistful and less triumphant than last time around.

Chan Marshall’s battles with stage fright have been well-documented, but the musician appeared to have pushed past those troubles last year when she visited Portland on the first leg of her Wanderer tour. She owned the stage, smiled at the audience and made eye contact. So it was a surprise that when Marshall returned this week, almost a year later, she chose to play the show with the lights set so we couldn’t see her face. Playing a variation of the same show, Marshall still sounded great, but the concert felt more wistful and less triumphant than last time around.

Marshall took the stage holding a lit piece of incense, flanked by a three-piece band. Though the setlist flitted around various points of her career, including snippets of choice covers, many songs were done as a medley, bleeding in and out to a point where instead of distinct songs, most sounded like part of a cohesive, single piece. It was a good mix, featuring old favorites like “He Turns Down” and “Cross Bones Styles” as well as new favorites such as “In Your Face.”

Even when bathed in partial darkness, Marshall commanded the stage with her imposing presence. The audience watched in rapt silence as she sang, cloaked in a black dress, sometimes clutching two mikes at the same time, her smoky voice teasing the room with its weary sadness. Sometimes the tempo escalated, like on “Manhattan,” but mainly slower, sad songs ruled the evening. At times Marshall’s vocals got buried in the mix and it was difficult to tell which songs she was singing but usually the melody eventually clued us in.

Marshall paid tribute to her influences as sections of Nick Cave’s “Into My Arms” and soul favorites such as “Dark Side of the Street” interlaced with her own material. We also heard her sing “Shivers” by the Boys Next Door towards the end of the set, cutting in pieces of “Oh! Sweet Nuthin’” and “He Was a Friend of Mine.” Still, Marshall’s own material was the true showstopper. “Me Voy” from Wanderer was a startlingly emotional centerpiece of the evening as Marshall sang more emphatically than she does on the already haunting album version. By the time the song appeared, she had discarded the incense but we could still smell it as it smoldered on the stage’s floor.

Marshall awarded fans with deep cuts such as “Great Waves,” a song she wrote and performed with Dirty Three on their 2005 album, Cinder. The biggest applause went to “Good Woman” and “The Greatest,” played towards the end of the evening. Though Marshall sang different lyrics for the first part of “Good Woman,” the audience still responded with appreciative shouts.

Though she did not come back for an encore, Marshall left us with words of encouragement, telling us to reach out and call our friends. We couldn’t see her face but we knew what she had to say was sincere and honest. Marshall may not have felt as secure on the stage as the last time she played Portland, but any chance to see her, whether cloaked in darkness or bathed in light, is an amazing experience.