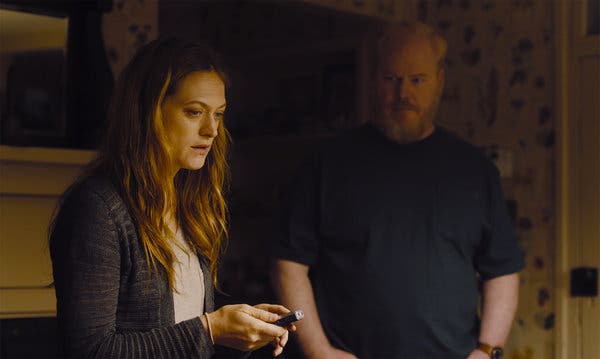 This quiet film is loaded with subtle metaphors, or at least symbols that aren’t hammered over your head.

A part-time paranormal investigator (Marin Ireland) responds to a call from a widow (Jim Gaffigan) who thinks his house might be haunted by his late wife. In any other hands, this would be a rom-com or horror movie, but director Paul Harrill, in his second feature, has created something far gentler than the sum of its seemingly genre-laden parts.

As if demonstrating that this is a different kind of cinema, the film opens with Shelia (Ireland) in a radio studio, explaining her role as a ghost hunter. It’s apt that the man who leads Richard (Gaffigan) to this spiritual interlocutor is his priest (David Cale). Father Martin knows that a member of his flock (he married the couple, though Richard doesn’t attend church) is in distress, and has sensed a strange presence in his empty Victorian house. The priest happens to be listening to the radio when Shelia is being interviewed, and again, in another movie much would be made of what ends up something like providence, but Harrill is too subtle to make anything so obvious.

Harrill establishes the rural Tennessee setting with peaceful shots of treetops that are much like Ozu’s famous “pillow shots,” setting up location as well as tone. The filmmaker has an eye and ear for the kind of small detail you don’t ordinarily experience on screen: when Shelia, who works at an airport rental car office, vacuums up a car after its returned to the shop, you can hear the sound of the suction popping off the upholstery, as if struggling to complete its task.

This quiet film is loaded with subtle metaphors, or at least symbols that aren’t hammered over your head. Shelia hopes to be a liaison between Richard and the dead, but in her main job, she helps travelers get to where they’re going by more mundane means. Meanwhile, Richard works for the park service in a fish hatchery, which, like the film’s title (taken from the Nicene Creed) has a biblical resonance.

Much like Harrill’s 2014 debut, Something, Anything, Light from Light observes a woman looking for the greater meaning of life after enduring some tragedy. While the trauma in the 2014 film was defined—a miscarriage—Shelia’s past hurt isn’t specified, but whatever it is, it spooked her. She’s passed on that fear of intimacy to her teenage son (Josh Wiggins), who’s reluctant to take his best friend, Lucy (Atheena Frizzell, the great-granddaughter of country music legend Lefty) to homecoming because, what’s the point, it will probably end anyway.

Light from Light is the most modest of haunted house movies, but while it is indeed haunting, it’s not the least bit scary; that’s not the kind of movie this is. It’s as if Harrill took the very concept of horror and stripped that fear down to its essence: the dread and longing for meaning, for some sign of life after death. The director sets a somber, restrained tone, and the understated score by Adam Granduciel and Jon Natchez helps sustain that tone. But it’s up to the cast to pull off Harrill’s vision. Gaffigan has proven himself an asset in dramatic roles; he conveys a pathos even in comedies like Being Frank. Ireland seems to be taking a role in a variation on Olivier Assayas’ Personal Shopper, but she’s more expressive than Kristen Stewart. Ireland’s Shelia is disappointed in life and wary of truly getting close, but when she lets go, the effect is startling.

With a long end credit sequence, Light from Light wraps up in under 80 minutes, and its narrative may seem slight. But it strikes such a warm, patient tone that it lingers long after it’s over.