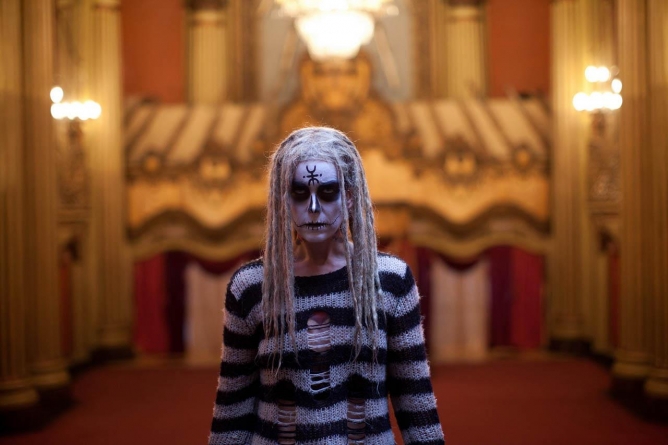 The extent to which The Lords of Salem positions its climactic catastrophe as both self-annihilation and self-actualization makes it one of the most evocative, thought-provoking works of horror this decade.

As a director, Rob Zombie was perhaps born just a bit too soon. His films, predominantly released during the torture porn era of 2000s horror cinema, certainly didn’t require a great deal of extrapolation to fit them within the gory trends of the day. Yet even Zombie’s schlockiest films contain a level of empathy rare for its period (or any era, for that matter); The Devil’s Rejects morphs halfway into its running time from a callous parade of ultraviolence to an unlikely family road movie, and his two films remaking John Carpenter’s Halloween ultimately focus so strongly on the trauma and guilt of survival that they might have been celebrated had they come out in this contemporary period of “elevated horror,” in which films’ thematic bedrocks are brought to the fore.

Then again, Zombie’s emotional and thematic messiness is alien in the time of A24 horror, with its memeable performances and tidy compositions. His characters do not exist to be explained and to have their fears and traumas neatly summarized. Consider Heidi (Sheri Moon Zombie), the protagonist of The Lords of Salem. A DJ in Salem, Massachusetts, who finds herself haunted by visions of the town’s colonial witches; the horror visited upon Heidi initially seems purely external, a matter of curses and hauntings. Yet as Heidi seems to wither from her ghostly tormentors rather than scream and flee, one gets the sense that something has been dredged up inside of her, and that it eats her from the inside. Only about two-thirds of the way through the movie, though, does it become fully clear that she is a recovering meth addict. Rather than foreground this aspect of her character, and thus frame the entire story around it from the outset, the film instead forces the viewer to consider the protagonist’s contradictory responses to her suffering first before providing deeper context for it.

Sheri Moon Zombie’s performance is one of the most entropic in all of horror. Plagued by visions and nightmares, Heidi never gets even the mild catharsis of screaming in terror. Instead, she responds with a kind of muted agony, retreating ever further inside herself. The film structures its scares accordingly, frequently avoiding a direct confrontation with the witches who plague Heidi and instead placing them in the background, ominously watching their prey, who walks past them obliviously. And when Heidi finally does realize that something is wrong, she responds to the horrors in a daze, becoming most animated when struggling to maintain her composure (and, tacitly, not to relapse).

Zombie’s first film following the creative frustrations of his Halloween films, The Lords of Salem afforded him total freedom, and he responds by modifying the harsh, tactile gore of his earlier work into something more surreal. Besides the aforementioned displaced scares of arranging horror in the background, Zombie crafts a kind of fugue state to reflect Heidi’s decaying mind and collapsing willpower. In one scene, she is lured into the empty apartment down the hall from hers, where she finds a cross neon sign that pulses red light into the dark room so strongly that the entire frame wobbles and shimmers with the hypnotizing buzz. As Heidi stands transfixed, we see the outline of some horrid beast standing behind her. Scenes like this further emphasize the wisdom of making Heidi’s past with drugs a matter of insinuation, allowing what could have been an obvious metaphor for the beast on recovering addicts’ backs to simply play out as cold terror. Similarly, Heidi must deal with visions of lecherous priests and demonic fetuses, images loaded with metaphorical gravity that Zombie never frontloads, presenting in stark terms and leaving it to the audience to interpret Heidi’s mental state and buried trauma that manifested such horrors. Elsewhere, Brandon Trost’s cinematography is bleak and cold, casting lamps and ceiling lights in such a pale glow that they seem to emit no heat whatsoever, emphasizing Heidi’s increasing emotional isolation.

A passion project from start to finish, The Lords of Salem indulges Zombie’s whims, even digging into his music background in ways comical (the morning zoo radio interview with a humorless black metal musician, complete with wacky soundboard effects) and crucial to the text, as in both the diegetic use of drone rock by the witches to control women in Salem and the use of soundtrack cuts like The Velvet Underground’s “All Tomorrow’s Parties” to signal cathartic moments. Admittedly, the film’s core narrative contrast, between Heidi’s struggles to maintain sobriety and sanity and the lingering history of Salem’s dark past, never quite coheres in any logical way. But like the horror of David Lynch, what The Lords of Salem lacks in narrative sense it makes up for with a clear-eyed emotional impact, with Sheri Moon Zombie’s insular, imploding performance the perfect tonal inverse of Scout Taylor-Compton’s chaotic grief in Halloween II. Zombie may get tagged as a schlock filmmaker with a garish sense of humor and a love of blood, but his most personal feature is a crystalline a demonstration as one is likely to find of his steadfast empathy and care for his characters. Violence always serves a purpose in Zombie’s work, and the extent to which The Lords of Salem positions its climactic catastrophe as both self-annihilation and self-actualization makes it one of the most evocative, thought-provoking works of horror this decade.