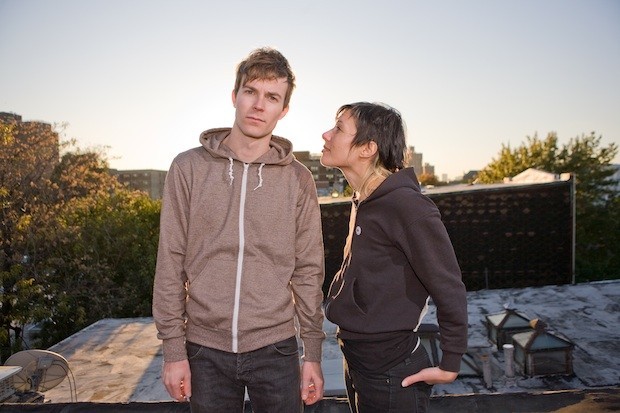 It feels shockingly wholesome to watch a couple 15-years into their relationship still excited about each other.

At about 10pm, 45 minutes into Matt and Kim’s performance at the Crystal Ballroom, I became aware that I’d been hit in the side of the face with something. I looked around and realized, with mildly shocked amusement, that stage hands and security had thrust a collection of male and female blow-up dolls with the duo’s faces on them into the crowd – the ones modeled to look like drummer Kim Schifino were mostly anatomically neutral, but the ones that looked like Matt Johnson (singer, synths, and keys) were, politely speaking, not. While most bands would be content to use beach balls or balloons (the latter would come later), for Johnson and Schifino, their lives and live shows are ruled by a filthy guiding principle Schifino addressed later: “We do shit because it’s fucking fun and it’s fucking funny.”

This principle is why, of all of the shows I’ve seen in, their blowout celebration of the 10th anniversary of their sophomore record, Grand, is one of the most relentlessly fun and entertaining shows I’ve ever seen. The duo perform alone – no backup players or hired guns, just them, on a riser, positioned next to each other. They don’t need anybody else, as the pair may have been genetically engineered to be party-starters and mayhem-creators. Matt and Kim were never quite “my band” in the same way that other synthpop outfits are, but Grand was entirely my kind of record from the moment I saw the fascinating, NSFW video for “Lessons Learned,” in which the two walk through Manhattan and, in slow motion, strip naked, evade the cops and get hit by a bus. It was easy to be mesmerized by how easy the band made synthpop look, done in a way that wasn’t meant to be cool or sexy, but purely ecstatic.

The two took the stage dressed like thirtysomethings trying to look sexy and stay comfy while dancing: Johnson in a Venom tank top, black shorts, and a headband, and Schifino in galaxy-printed jeans, a plaid sports bra, and a fishnet crop top (and a knee brace for her second torn ACL, which she’d discuss late in the show). The first half of the show consisted of Grand in its entirety, though totally out of sequence. It’s hard to really put a finger on why – the album’s flow is solid as is, and if it was meant to be for the sake of riling up the audience, they wouldn’t have put “Lessons Learned” (which inspired the most full-throated and ecstatic response of any song during the Grand-centric set) as the fourth song, just 15 minutes in. Nobody cared, they just danced their asses off to each and every song. They’d interrupt periodically to hype up the crowd and dance around, introducing songs and asking for audience participation. This all closed on the album’s closer, a remix of “Daylight,” blended with 50 Cent’s classic “In Da Club.”

The pop music of others factored heavily into the show, especially the second half. They’d trigger songs like Unk’s “Walk It Out” and Lizzo’s “Truth Hurts” and merrily do quasi-karaoke versions of these songs to hype people up for the next song – a very DJ-like move for a band to utilize. The band’s pop sensibilities are right enough that their music alone is enough to hype up a crowd, to the point where they don’t need House Of Pain’s “Jump Around” played next to Kriss Kross’ “Jump” to make people bounce around on the Crystal Ballroom’s famous springy floors, but why not get people hype by doing that? It’s fucking fun, and it’s fucking funny.

That mindset took the band themselves to obscene places. It was among the most unabashedly filthy shows I’ve seen in my life, even past the presence of blow-up dolls. The two are gleefully profane in the same ways that teenagers are, but with enough uncut charisma to keep this from being unpleasant; the press release for the tour states: “Language is definitely not suitable for all ages because of Kim.” The f-bomb count seemed to rival Scarface by the end, which never stopped being charming. At one point, Schifino played a floor tom like a war drum with to forearm-sized dildos. None of this should work as well as it does, but the two have enough chemistry that it works effortlessly. Plus, it’s just fun (and fucking funny) to watch people let their freak flags fly so joyously.

This is all made far more possible by the fact that Johnson and Schifino are a couple – a fact they will not let you forget: there were frequent jokes about their sex life, from Johnson saying “I don’t have any rhythm, which is surprising because I’ve been fucking Kim of Matt and Kim for 15 years.” During a tongue-in-cheek behind-the-scenes slideshow on the creation of Grand, Schifino goaded him for not having sex with her for the two months they spent making the record in his childhood home. He showed photos of himself at the time while saying, “Does that guy look like he fucks? No!” She flashed her breasts at the audience, they slapped each other’s asses, they made jokes about having sex with the audience. It’s crude, but it feels shockingly wholesome to watch a couple 15-years into their relationship still excited about each other.

And through it all, the crowd remained in a state of pure euphoria. They giddily blew up balloons to bounce around the place, entertained a sea of crowdsurfers, and divided themselves on either side of the All Ages/21+ dividing barrier to do a wall of death. They did all of the stomp/clap rhythm games and crowd participation sing/screaming without fretting over how passé crowd participation is – in Matt and Kim’s hands, it feels essential to the show. By the time I left, sweat-soaked and sore, it was hard to actually know if the show was “good” or not. Who cares if it was? It was, frankly, fucking fun and fucking funny, which is the band’s goal. By that metric, it was the perfect show.