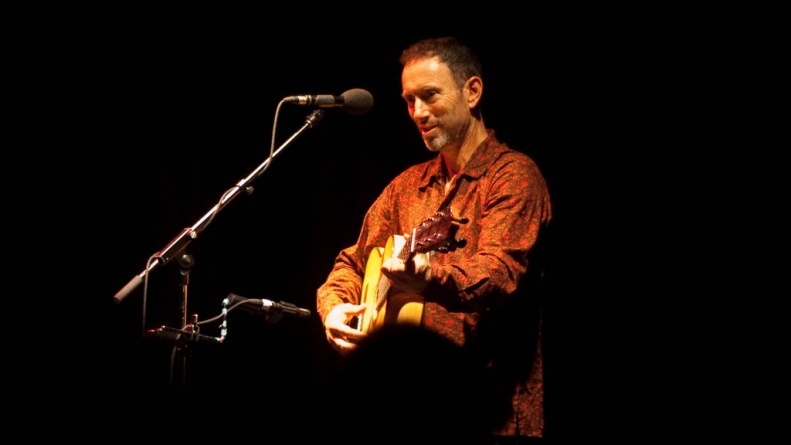 Richman has been chasing a singular muse of his own for decades now.

His Modern Lovers days long gone, Jonathan Richman has been chasing a singular muse of his own for decades now. Emancipating himself from a full band but still accompanied by trusty drummer Tommy Larkins, the Boston-born musician is anything but conventional. Not only does he sing in numerous languages, Richman has appeared in Farrelly brothers’ films, played a tiny dive bar in Portland just because he liked it and even claimed that he just makes up his songs.

That revolutionary spirit was on full display in Portland the other night as the concert felt like less a conventional musical experience and more like a spoken word act with some guitar accompaniment. Nothing felt scripted that evening as Richman jumped from singing to quoting Rumi to dancing with maracas. With his hangdog looks, thick Bostonian accent and unblinking eyes, Richman is also completely earnest.

Richman’s set also felt improvised. He would begin songs, such as his much-loved “That Summer Feeling,” and then completely change the lyrics and wax poetic about something different. Much of what we heard was Jonathan’s worldview, most often pining for simpler days of the past, but even in songs such as “Because Her Beauty Is Raw and Wild” and “He Gave Us the Wine to Taste,” Richman cut to the chase by celebrating a woman’s beauty and the pleasure of wine. It doesn’t need to get any deeper than that.

The notoriously persnickety Richman mandated that no one could eat or drink during the performance and that no one use their cell phone. At one point, he castigated an audience member for having their phone out, saying that he doesn’t want people watching television during his show and that he’s cranky. But the sold-out crowd sat mostly in silence, applauding when appropriate. Some guy shouted, “Get down with your bad self” during one of Richman’s break-out dance sequences to which the singer responded, “It’s the only thing I got!”

Promoting new album SA!, Richman found time to sprinkle in new cuts such as “A Penchant for the Stagnant” and “Yes, Take Me Home,” the latter written from the perspective of a dog waiting to be adopted. The new songs fit right in with older tracks, including a very straightforward rendition of favorite “Affection.” He even somehow worked in King Harvest’s “Dancing in the Moonlight” for a left field audience singalong.

Over the years, it seems that Larkins’ role has become smaller and smaller. This time around, he sat in front of a conga drum and sometimes lightly palmed a beat. The spotlight did not touch him. Instead, the focus was on Richman as he spouted off ruminations about the Indian poet Kabir before singing in Hindi during “This Lovers’ Lane is Very Narrow.” He also sang to us in very functional French, Italian and Spanish.

Richman’s shows have moved away from the crowd-pleasing sets of the past and more towards what seems like a personal journey. Favorites such as “Pablo Picasso” and “I Was Dancing at the Lesbian Bar,” past concert mainstays, were nowhere to be seen. It doesn’t matter. To see an artist still pushing ahead with his craft as he pushes 70 years on this earth, and not resorting to reunion tours or other gimmicks, is an inspiration in its own right.