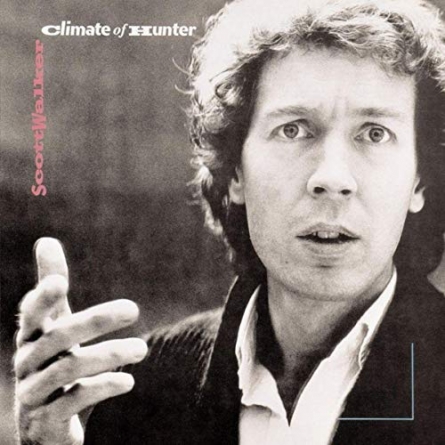 Walker’s sole album of the ‘80s is like a crystal, cut and polished into the purest jewel.

Scott Walker’s sole album of the ‘80s is like a crystal, cut and polished into the purest jewel. It has a serenity, a shimmering sense of peace, that might reflect its creator’s relief at having a label take faith in him. After setting the stage for the long, brilliant final act of his career on 1978’s Walker Brothers swansong Nite Flights, he spent some time without a label, living in poverty. Virgin gave him an advance, a foolish or brave choice depending on how you see it; the record bombed and got mixed reviews, but Walker couldn’t have spent that label money any better. Climate of Hunter is an avant record with the suavity we associate with the era’s pop, and Walker waltzes through it with confidence, as much a frontman as an omnipotent figure pulling strings.

As on Nite Flights, Walker fills the frame with great sweeping gusts of organ and synth and the incongruous moan of a fretless bass. These are sounds that could be found on a Blue Nile record, but this is a Walker album, and everything is in flux. The singer himself is like a center of gravity, and when coiling serpents of free-jazz saxophone well up on “Track Six,” they seem to be traveling towards Walker, as if he’s summoned them with a wave of his hand. Ditto a dubby two-note horn figure on “Dealer,” which could be an echo or could be someone playing two notes ad nauseam. It seems suspended in air, as if trapped in Walker’s gravitational field.

“This is how you disappear,” goes the album’s opening line—and its most famous, given that it’s the only one we can hang a narrative on. The rest of Climate is more abstract, and images of “Cro-Magnon farmers” and “peeling tongues from the ice” swim through our heads. In calling so many of these tracks “Track Three” or “Track Six” he’s rendered them all but inseparable from the album (“Track Three” was the single, perhaps because it features both Billy Ocean and Mark Knopfler close to their respective commercial peaks). There’s the sense we’re not listening to individual songs so much as scenes in some fantastic painting by Brueghel or Bosch, and indeed Walker’s songs owes something to those masters in their droll grotesquerie.

Walker’s voice sounds like a holdover from the older era of crooners he channeled on so much of his ‘60s and ‘70s work. His vocals have gravity but little personality, and he sounds in the best, eeriest way like a conduit for the words. There’s an innocence in his voice that clashes with the dread knowledge contained in these songs. Though the eight songs on Climate are too obtuse to announce themselves as being “about” anything, it’s hard to hear Walker sing of “an exile from the jails of another” on “Sleepwalkers Woman” and not connect it with the rogues’ gallery of torturers, murderers, dictators and corrupt politicians that slithers through his work. Same goes for the grisly image in “Dealer” of a wire traveling through someone’s eye.

Climate of Hunter’s abstraction means it goes down easily. Unlike on later tomes like The Drift and Bish Bosch, where Walker wanted us to know exactly what characters he was writing about and what heady idea he was trying to convey, we can let Climate simply wash over us. Walker’s best work does a number on our guts; the album is content to swim before our eyes. But that’s what makes it weaker than the records he put out in the remainder of his life. It raises questions but never pokes at implications. In Walker’s best work, we dive with him into uncharted depths. Climate we admire from a distance as a pure, shining, unbreakable object.

Daniel Bromfield is a writer, musician, queer, poptimist and Prince obsessive currently residing in Portland, OR. More of his work can be found at danielbromfield.com.