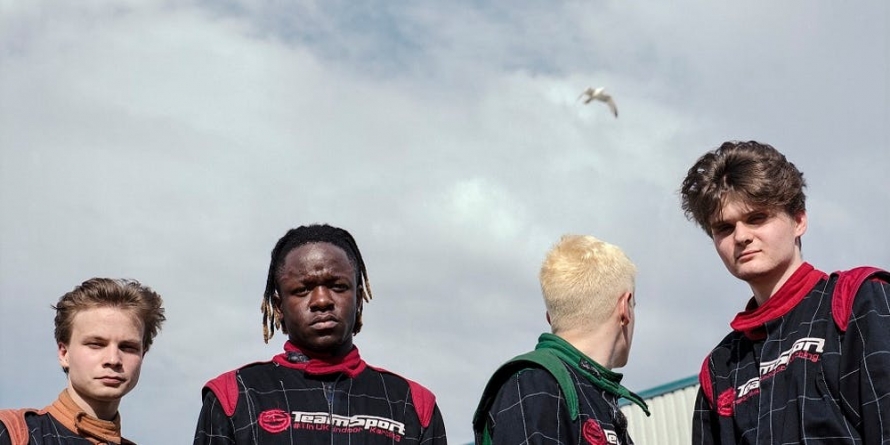 The members of black midi are all pretty otherworldly musicians, and have come together to operate with impeccable tightness as a group.

Based on the line outside of Warsaw at 7:50 PM, one might’ve thought that the doors for the sold-out black midi show opened at 8 PM—a sign of all the excitement surrounding the young British quartet. Instead, the sounds of the local free jazz group, Onyx Collective, began seeping out from the venue doors just as a large queue of young fans ready for noisy, math rock entered the building.

The balaclava-wearing Onyx Collective played 40 musically unpredictable minutes in fairly mesmerizing fashion. The group moved from intense, guitar and riff-oriented hard rock cuts to free-flowing saxophone-centered jazz pieces, back to more chaotic noise pieces, and some that even ventured into the world of relatively straightforward indie rock thanks to its lead vocals and accessible song structures. The audience seemed to respond best to the louder, guitar-driven tracks and noisier free jazz—not all that surprising within the context of a black midi show. As the crowd really began to fill-up what remained of the open floor and Onyx Collective brought their set to a close, the band seemed to have won over everyone in the room.

Getting a late start for this set, bassist Cameron Picton satisfied an impatient crowd when he hopped on stage to hit play on a laptop to launch into some British rap from The Streets and Dizzee Rascal. When black midi finally made it to the stage, they immediately jumped into a roughly hour-and-a-half-set that covered pretty much the band’s entire discography. It doesn’t take long to recognize that the members of black midi are all pretty otherworldly musicians, and have come together to operate with impeccable tightness as a group. The most common form of expression in the audience, from what I saw, were stink-faces directed towards the band’s musicianship and consistency piecing together complex grooves and cacophonic outbursts.

The band played a fairly continuous set, filling the time between “songs” with bone-shaking electronic drones or unmoving grooves. For the first hour, the crowd happily raged along to black midi’s abrasive yet magnificently composed math rock and noise-influenced tracks. As the set moved into its third act—signaled by a gleeful cover of The Champs’ “Tequila” that moved into the heavy “bmbmbm”—the band even began to let loose, allowing themselves to be more outwardly expressive, dancing and raging themselves. A few final highlights were provided by a jaw-dropping performance of “Western” and rapper Fat Tony, who made a surprise appearance during “bmbmbm.” By the end of the night, sweat-drenched fans left Warsaw with wide smiles, singing along to “Can’t Help Falling In Love” as it played over the PA.

Reviewing their debut album earlier this year, I mentioned that the music felt emotionally cold, focusing more deeply on the intricacies of the compositions and applying an almost academic approach. Live, it was clear that the heart of black midi is built into those very details. Watching this class of musicians delicately tear through its harsh sounds became more impressive with each moment. Going into the show, I was skeptical of the hype surrounding black mid’s live concerts, even after really enjoying the album. Now I believe the hype.

Evan Welsh is a writer and coffee addict from Salt Lake City now based in New York. He recently graduated from the University of Puget Sound with a degree in English (the only language he knows) where he had a radio show about music with literary references. If you’d like to talk with him about music, books, how frustrating the Knicks are, or anything else you can find him on twitter @evanswelsh15 or at a live show somewhere.