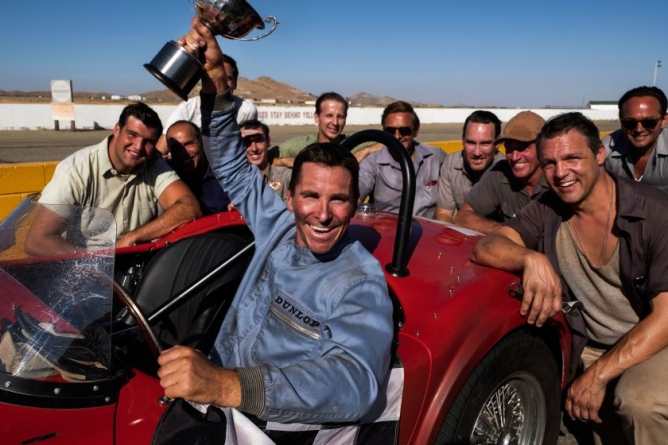 Ford v Ferrari feels like a throwback to the bloated prestige pictures of the ‘80s, all the way down to its USA-first message.

Ford v Ferrari feels like a throwback to the bloated prestige pictures of the ‘80s, all the way down to its USA-first message. Telling the story of the 1966 Le Mans auto race, a 24-hour ordeal that pitted underdog Ford against perennial champion Ferrari, director James Mangold draws out his two-and-half hour runtime in what could have been The Right Stuff of car racing. Instead, it’s a handful of exhilarating racing scenes padded out by a mediocre drama.

Matt Damon stars as Carroll Shelby, an ex-driver turned car designer after a heart issue derailed his racing career. After being approached by the Ford Motor Company to build a car to defeat Ferrari in Le Mans, Carroll brings on board Ken Miles (Christian Bale), a short-tempered, mercurial Englishman who just happens to be one of the best drivers in the world. But rather than dig deep and explore both men and their wounded psyches, Mangold and screenwriters Jez Butterworth, John-Henry Butterworth and Jason Keller only paint the men and their fiery relationship in broad strokes.

After a deal to purchase Ferrari goes sour, Henry Ford II (Tracy Letts) decides to one-up the man who defied him and build a car that will give him Le Mans. So basically, the entire plot is based on the petty desire of one guy looking to take down another, a pissing contest between the rich, so to speak. The only thing on the line here for Ford is his huge ego and wounded pride.

The stakes for Ken are much higher. Just before he is hired to race, the IRS seizes his auto shop. Yet, there seems to be more to the hot-headed Ken than Mangold is giving us. Bale does his best with the thin role but we never understand what compels him to drive at unsafe speeds. Meanwhile, Carroll is the grinning, all-American yahoo that Damon can play in his sleep. We know very little about him except that a bum ticker forced him off the track and into the garage.

Even worse are the depiction of Ken’s wife, Mollie (Caitrona Balfe) and young son, Peter (Noah Jupe), who basically exist to fret during racing scenes and provide dumbed-down summaries while the race is happening for audience members who are having trouble following along. And there is no way any of Mollie’s dialogue is passing any sort of Bechdel test.

Meanwhile, Ford and slimy racing director lackey Leo Beebe (Josh Lucas) keep throwing up obstacles that Carroll has to work around to win the race. The biggest problem is that Beebe doesn’t like Ken and tries repeatedly to kick him off the racing team. It is hard to cheer for Ford, even as the underdog, when awful men like Beebe are benefiting from winning. Even Enzo Ferrari (Remo Girone) has more honor.

Ford v Ferrari does not earn its distended runtime, and its somber coda feels shamelessly tacked on, especially after the bittersweet end of the Le Mans race. The film lays on its prognosticated ending quite thickly and tonally it feels all wrong. Bale and Damon do their best with the thin material they were given and even though Ford v Ferrari features some exciting racing scenes, it barely makes it past the checkered flag.