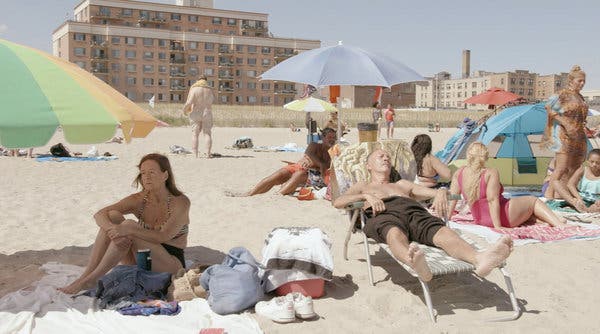 The Hottest August offers a profound sense of solidarity, a demonstration that, ultimately, we’re not always alone in our aloneness.

When director Brett Story took to the streets of New York City in August of 2017 to film her new documentary The Hottest August, it had been nearly five years since Hurricane Sandy hit. The storm caused billions of dollars of damage across all five boroughs and took the lives of at least 50 New Yorkers in the process—and the catastrophic effects of that devastation still lingered, half a decade later. A self-described environmentalist tells us early on about plans for a closable gate to protect parts of the shoreline from future storms, and as he muses to the camera, we gaze from his boat upon rows of decimated houses, still in states of disrepair. Later, a pair of women explain for the camera the injustices and inadequacies of relief programs like FEMA; “she took a big mortgage here, and now what, she don’t count?”

But Sandy isn’t the only disaster on people’s minds. Conspicuously-placed TVs and newspapers appear in a number of shots throughout the film, detailing the catastrophic damage of another storm, Hurricane Harvey, which devastated parts of Texas and Louisiana that August, as well as news of protester Heather Heyer’s death in Charlottesville, which occurred halfway through the film’s shoot. But perhaps more persistent than any one incident is the general sense of the city in flux, the gentrification-induced anxiety that seems to color so many of the subjects’ answers, even when it isn’t explicitly addressed.

This array of various disasters all coalesce around one fundamental question, the question that defines the film, and one that we often hear Story ask her subjects from off-camera: “how do you feel about the future?” And indeed, despite the film’s post-Sandy positioning, this is a film concerned ultimately with what’s to come. It isn’t a postapocalyptic vision so much as it is a portrait of a pre-apocalyptic state of mind, an attempt to gain insight into the attitudes of individuals anticipating annihilation. The feeling is one of a world on the brink of collapse, not yet ruined but well on its way.

Though her questions are delivered rather neutrally, Story’s own perspective seems rather clear: she links the rapid degradation of our environment to the dominance of capitalism as a worldwide ideology. Punctuating her interviews are a number of poetic interludes, some of which are accompanied by voiceover passages from a variety of authors (the sturdy voice is that of Canadian theater actress Clare Coulter). At one point, Coulter reads from Zadie Smith’s essay “Elegy for a Country’s Seasons,” likening contemporary environmental attitudes to the way people in mourning resort to “the most melancholy of all euphemisms: the new normal.” Later, she quotes Marx’s Das Kapital: “‘After us, the flood’—everyone knows that some time or other the crash must come, but everyone hopes that when it does it will fall on the head of his neighbor, after he himself has caught the shower of gold and placed it in safety.”

On a macro level, it’s easy to apply these sorts of diagnoses to the collection of interview subjects presented to us, but the actual perspectives of these individuals tend to differ substantially, complicating any attempt to provide blanket answers. We hear from so many different people that one quickly loses sight of any sort of coherent message: jobless millennials admit to being afraid to bring children into this world; a performance artist insists that we continue to dream of the future; an economist espouses the practical necessity of capitalism; a single, immigrant mother claims to have returned from the brink of death only for the sake of her children; a warm, kindly Italian-American couple do their best to respectfully dance around their own discomfort at the influx of displaced nonwhite people moving into their neighborhood. How are we to understand all of these conflicting perspectives at once?

Take, for instance, the way the film presents the August 21st solar eclipse: a tense montage of police officers posted at a protest, anticipatory dread in the air, transitions into a series of still shots of clouded, doom-laden skies, as our narrator reads a passage from Annie Dillard’s essay “Total Eclipse.” We then see a sequence of New Yorkers gazing into the soon-to-be-eclipsed sun from behind an assortment of gadgets, ranging from officially-sanctioned eclipse glasses to endearingly homemade contraptions. This profoundly quiet, disconcertingly still montage scene is built on the anticipation of a symbolically destructive event, an environmental phenomenon long associated with apocalypse, and it serves essentially as the film’s centerpiece. But Story crucially chooses to undermine the overwhelming power of that extended moment by immediately cutting to a pair of young men fishing, totally indifferent to that would-be profundity. “Did you see the eclipse?” she asks. “Nah, not really.” They’re focused on their own world, on reeling in a fish. This is in line with a number of other moments across the film, moments that work to put these disparate voices in conversation with the film as well as with each other. (A striking example of the latter comes when a teenaged skater approaches the camera to dispute the nihilistic attitude of some of his peers who were interviewed earlier in the film, and in his view are just “perpetuating white stoner slacker stereotypes.) What we come to understand from so many of these moments is the way that individual survival takes precedence over the ostensibly more pressing issue of human survival. Of course the threat of environmental collapse is horrifying, but it’s hard to worry about such an abstract fear when one has to think about putting food on the table and paying rent.

There is a distinct looseness to the way Story and editor Nels Bangerter cut together footage. While the interviews are all connected by the question of the future, much time is given to observing brief, playful scenes of little consequence: a woman stroking a pet duck as she spectates an amateur softball game, or an elderly man chasing a runaway umbrella sailing across the beach. It’s clear that the film’s intent is not to present a singular, straightforward thesis, but to demonstrate that our current position defies clean answers entirely. In that sense, the film works in deliberate opposition to the polemic diatribes of something like An Inconvenient Truth. It’s easy to decry the obviously disastrous effects of capitalism on our world, but it’s harder to square that diagnosis with the understanding that our world is made up of a complex web of individuals, each of whom have their own personal worlds to deal with first. Finding the nuance in our infinitely complicated situation is Story’s chief concern here. It would be natural to take the film’s lack of solutions as a pessimistic stance, but the incompatibility of the individualism on display might also be understood in perversely collective terms. In its best moments, The Hottest August offers a profound sense of solidarity, a demonstration that, ultimately, we’re not always alone in our aloneness.

Brendan Nagle is a film and music writer based out of Portland, OR. You can follow him on Twitter @bnagle17.