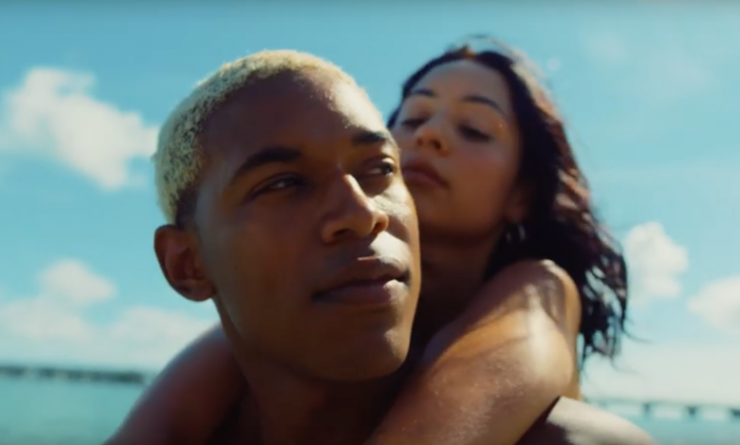 A movie that constantly seems as if its calculated and decisively intent on milking emotions out of the viewer.

Both thematically and cinematically, Trey Edward Shults’ Waves is a lot. It begins with a calm capturing of a young girl riding her bike, then devolves into a work of maddening yet fascinating chaos. We’re introduced to a suburban family, the Williams—most particularly son Trey, a popular high school senior and star of the wrestling team. The audience is given an immediate sense that Trey is reckless, as he’s introduced in the driver’s seat of a car going far too fast, with his left foot out the window, singing along to music with his girlfriend, Alexis (Alexa Demie), and barely paying attention to the road. He spends nights out drinking and partying. During the day he’s pushed by his studies, his wrestling obligations and the demands of his overbearing yet well-intentioned father, Ronald (Sterling K. Brown).

All of this is presented in a whirlwind of noise and image. Shults, known for his phenomenal breakout debut Krisha and 2017 follow-up It Comes at Night, is truly a master in the art of cinematic sound design. His works are most haunting aurally, edited with precise deliberateness and engulfed by scores that rattle the viewer and add endless unease to the sound palette (in this case, Trent Reznor and Atticus Ross are the musicians providing the auditory nightmare).

The visual editing matches what we hear, with Shults and co-editor Isaac Hagy cutting the film as if it were on cocaine. Scenes barely have room to breathe, as everything often feels like a dreamlike montage moving at 150%. Before we know it, we arrive at a tragic turning point in the lives of Trey, his family, and others. It’s a development that flips both the plot and the film itself on its head, in turn leading the premise in a direction that is far more interesting than its first half.

Like his previous two films, Shults experiments with varied aspect ratios, dividing his film up into three major sections—shifting from 1:85 to 1:33 to 2:35 and concluding back at 1:85, suggesting an aesthetic mirroring of the film’s title and its overall plot trajectory. Shults’ control over his framing has always had a thematic correlation, yet with Waves it is arguably his most distracting attempt at doing so.

This is hands down Shults’ most aggressive and ambitious film yet, and being both a sprawling melodramatic epic and the third work of a promising and risk-taking filmmaker, it’s hard not to chew on the comparisons to Paul Thomas Anderson’s Magnolia (1999). Both works bear the soul of their creator, with related meditations on father-son relationships, the choices we make, the aftereffects of trauma and the overall complicated landscape of our existence. However, for every moment in Magnolia where Anderson’s film showcased an act of true emotional power, Shults’ film matches it with one of immensely transparent manipulation.

There have been multiple claims that Waves is the type of film to rip your heart out and then carefully mend it back together, and there’s some truth to that. But more so, this is a movie that constantly seems as if its calculated and decisively intent on milking emotions out of the viewer. To put it simply, Waves has far more in common with a show like “This Is Us” than the fact that both star Sterling K. Brown. The exaggerated emotions of Waves, while presented in a wildly different structure of experimentally vigorous cinema, are quite similar to the tear-jerking nature of NBC’s hit melodrama. It will inevitably floor some viewers while irritating others, and perhaps even a combination of both, as the overall impact of the film relies on how much you allow it to wash over you. Falling somewhere between shallow waters and crashing tides, Waves is a wholly singular work that, despite the frustrations it creates throughout its duration, is one of the year’s most engaging and interesting films.