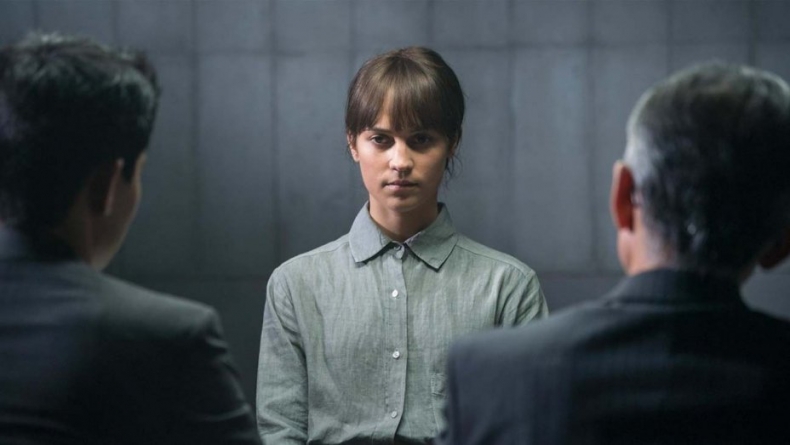 An underwhelming, melodramatic story that culminates in a shaky ending dooms Earthquake Bird.

An unreliable narrator can imbue a story with an intriguing layer of mystery or it can send a plot spiraling into nonsense. Unfortunately, Wash Westmoreland’s latest feature falls into the latter category, leaving the viewer to question what’s real and what’s imagined throughout the ultimately unsatisfying film. Adapting Susanna Jones’ novel of the same name, Westmoreland never comes close to complex female characters he helped shape in Still Alice and Colette. And that’s a shame, because just as those films showcased Julianne Moore’s and Keira Knightley’s respective strengths portraying women facing very different obstacles, here Alicia Vikander is more than game to wrestle with her character’s traumatic past. She’s simply not given all that much to work with.

Vikander plays Lucy Fly, a dour Swedish woman living and working in a neon-lit, late ‘80s Japan. Tragedy seems to follow her, as untimely demises (often through freak accidents) befall her friends and family alike. Whether suffering a broken neck from a tumble down a staircase or falling headfirst onto a board with a nail in it, those who interact with Lucy seem to do so at their own peril. Perhaps it’s that dark cloud hovering over her that causes shutterbug Teiji (Naoki Kobayashi) to take an interest in her. He begins obsessively photographing her to add to a collection he has no intention of displaying or publishing, and she seems to find his fascination with her equally compelling, posing for these marathon (and quite chaste) sessions with curiosity. Their romance is a slow burn, as he’s more inclined to snap her photo than jump into her bed, but once Lucy does finally couple up with Teiji, she’s soon thrust into a love triangle as American expat Lily (Riley Keough) gets thrown into the mix.

With Earthquake Bird told nonlinearly, we learn early on that things will not end well for Lily, as the narrative occasionally shifts back to Lucy’s interrogation about the murder of a friend of whom she clearly became jealous. Lily’s personality crackles with an energy completely foreign to Lucy’s stern demeanor, to the point that Lucy is surprised to find that her flighty new friend (who struggles with speaking the most basic Japanese) once worked as a nurse. And yet in many ways, they complement each other, which makes the fact that their friendship soon expands to include a polyamorous romantic element with Teiji almost a natural extension of their affection for each other.

Except, when Lucy and Lily share a tender moment together, Lily has no recollection of it the next morning. At one point, a visit by one of Lucy’s coworkers is shown to be a complete hallucination. And as the film begins to raise the stakes and delve into supposed crimes of passion, it becomes more and more difficult to decipher what’s actually happened, as the two women’s friendship curdles into lusty rivalry akin to that between Natalie Portman and Mila Kunis in Black Swan. Though the film is impeccably scored, beautifully shot and well-acted, it’s the underwhelming and melodramatic story culminating in a shaky ending that dooms Earthquake Bird.