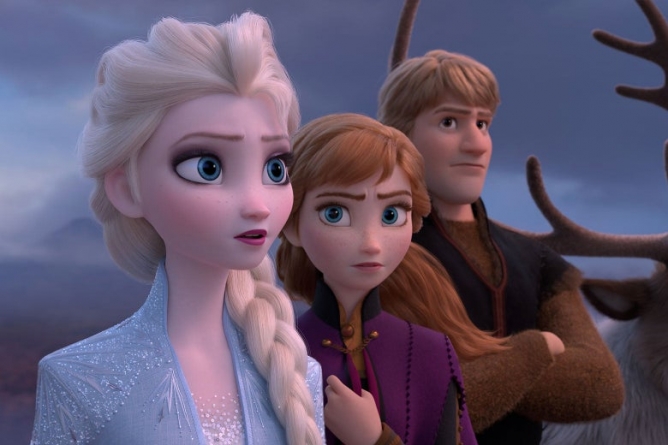 A whole new soundtrack is about to take over our lives.

On the way to the theater to see Frozen II you might feel inclined to say something like this to the six-year-old accompanying you: “Listen, every great movie gets a sequel, but the list of great ones is very short. Sequels are basically remakes of their predecessors, bigger, grander but hitting familiar marks. Once in a while you get a Godfather II or Toy Story 2, but it’s best to keep your expectations low. The chances of us getting another ‘Let It Go’ is nonexistent.”

By the time the end credits finish rolling, you can press deeper into your comfy movie theater seat and bask in your correctness. None of the songs have crept into your mind like Elsa’s original showstopper and many of the joys of the original are tweaked in the sequel, including a surprise reveal that drives the climax. Rock monsters replace Marshmallow, the snow monster. Someone gets frozen again. Another scruffy man-child shows up, one who speaks for reindeer. You see all this with your film critic’s head, but the aforementioned six-year-old is dancing in front of the screen shouting “That was awesome! That was awesome!” And she is correct.

Directed by Chris Buck and Jennifer Lee, from a screenplay by Lee from a committee with a “Story by” credit, Frozen II lays out Elsa’s origin story while smartly expanding the world and mythology that surrounds the kingdom of Arendelle. Three years after the events of the first film, the main cast is settling into their familial roles. Elsa (Idina Menzel) has proved an excellent queen. Anna (Kristen Bell) is both her sister’s cool lieutenant and fretting parent. Kristoff (Jonathan Groff) is waiting for the perfect moment to propose to Anna. And Olaf (Josh Gad), the adorable snowman, is dealing with the philosophical crisis of his own mortality. Sven, the reindeer, remains a relatively steadfast companion for Kristoff, though he does get the chance to sing in his own voice this time around.

A prologue describes a meeting between the Arendellians and a mountain-dwelling tribe called the Northuldra from a time when Anna and Elsa’s father, King Agnarr (Alfred Molina), was a boy. To reach a peace with the Northuldra, King Runeard (Jeremy Sisto) of Arendelle builds a dam over a waterfall that will help the Northuldra to thrive. The two factions meet in an enchanted forest ruled by four elemental spirits of earth, air, fire and water. Without warning, a fight breaks out between the two human factions, upsetting the spirits. An impenetrable foggy veil descends upon the forest, and few of the Arendellian force escape before it is too late.

A voice sings a rising note from behind the fog that only Elsa can hear. She responds with “Into the Unknown,” a promise song where she states her intention to meet the mysterious singer, but that decision is removed from her. Earthquakes force her people from their homes, and she and Anna know that magic is responsible. Soon the gang is riding toward the enchanted forest on a Sven-powered wagon to pierce the fog and defeat the mysterious force afflicting Arendelle.

Most of the characters evolve in interesting ways, especially Anna, who must come to grips with the ways she tries to control Elsa, and Olaf, whose philosophical journey provides the dual function of needed weight and comic relief. But the mandate to the sequel of a surprise phenomenon is to unleash the animators. The four elements of the enchanted forest give this legion of craftspeople the chance to play in all manner of imaginative environments beyond Elsa’s trademark ice and snow. The rock giants are particularly impressive, but it’s the extended sequence of Elsa battling the sea that steals the movie.

Any complaints about sequelitis are small. Several new characters are introduced, but have little to do in service of Anna and Elsa’s separate narratives. The creation of the fire spirit coincides with holiday wish lists and the misfortune of parents with small children who love exceedingly cute baby dragons. But overall the sequel continues the magic of Frozen with enough grandeur to mask its flaws. The themes of love, determination and heroism remain central to the adventure. Frozen II could provide a fine conclusion to the tale of the two sisters, but it provides a vast world for the franchise to grow.

While this reviewer’s aged ears did not find any of the songs immediately catchy, the same cannot be said of the six-year-old who can sing at least three of the new tracks after just one viewing. So, this is your parental warning. A whole new soundtrack is about to take over our lives.

Nadia Kelly contributed to this review.