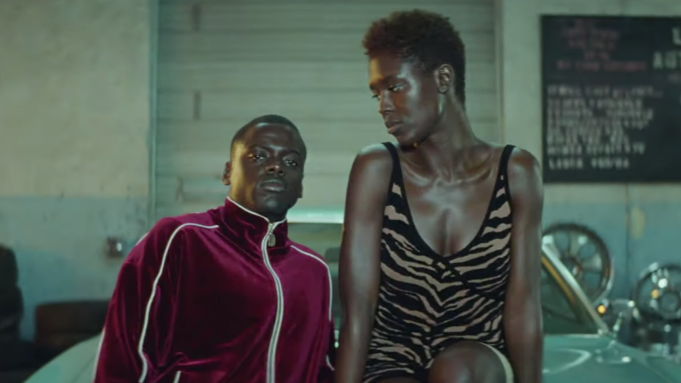 Queen & Slim is a true coming out party for a director whose music video and commercial work has long presaged a future in features.

Queen & Slim’s writing and directing duo, music video helmer Melina Matsoukas and Emmy award-winning TV writer Lena Waithe, last teamed up on a 2017 Thanksgiving-themed episode of Aziz Ansari’s Netflix series “Master of None.” It was a brilliant half hour of television, earning Waithe that statuette and shooting her into the stratosphere, occupying a similar industry space as Jordan Peele and Ava DuVernay, the other handful of black storytellers whose names Hollywood sees fit to plaster throughout trades with news of freshly greenlit projects. But the transition to the big screen with Queen & Slim, while a true cinematic arrival for the powerful visual stylist Matsoukas, exposes the upper limits of Waithe’s scripting abilities, resulting in a sumptuous exercise held back by inconsistent, intermittently cringey writing. For audience members starved of variety in black mainstream storytelling, the film feels like a dream, but it also harbors a cautionary tale for the limiting side of pop culture’s tokenizing of black artists telling black stories.

The film’s premise is admittedly a near-perfect concept. A young black man (Daniel Kaluuya) and a young black woman (Jodie Turner-Smith) go on a random Tinder date, only to be pulled over by an overzealous police officer. The encounter goes horrifically, typically awry, leading to the cop being killed in self-defense and the erstwhile couple left to go on the run for fear of “shoot first, ask questions” later cops. The set-up alone conjures obvious comparisons to road movie two-handers like Bonnie & Clyde, Thelma & Louise and even Natural Born Killers, as the pair travel from safe space to safe space, encountering hostility from the law in equal measure to nourishing, mythmaking levels of black camaraderie. As a framework, the plot has the potential to be thrilling in a purely mechanical sense, but also with high stakes and room to explore complex themes between the bigger dramatic beats. But in execution, this life-or-death narrative routinely drains the proceedings of genuine stakes, luxuriating instead in loping interludes and asides, like a particularly stirring chapter involving the young woman’s uncle (a stellar Bokeem Woodbine), a war vet and washed up pimp who lives with a group of women who still treat him like a king.

There’s a lyrical, dream-like quality to these sections, with dialogue between the two leads laid above congruous scenes like Malickian voice-over narration, Matsoukas lensing gorgeous portraits and scenery with frustrating ease. Her eye for loving detail, properly lighting dark skin, and Blood Orange’s lovely score means that the film is never boring or unenchanting aurally, and the truly fascinating cast (among other supporting roles, Flea and Chloe Sevigny show up as a married couple) provide the necessary charisma and empathy to make this story an engrossing one.

But the script is confoundingly blatant at times, as if someone stretched a film student’s thesis too far. The opening first “date” works so well because it operates in the same space as Waithe’s television work, where she excels in beautifully observed character moments and subtle bursts of reality that feel plucked from the collective black unconscious. It’s when the larger story pulls the narrative in more experimental, ambitious directions that scenes fall apart. Dialogue becomes on the nose to a fault and ideas are presented so forcefully they feel like the emotional equivalent of Truth.com anti-smoking ads.

Sure, Waithe in every interview has bragged about how much creative freedom she had in making this movie, and how she didn’t take any notes from any white people on telling this black story. But she also gave a “generous” story-by credit to “A Million Little Pieces” writer James Frey, who gave her the entire premise at a party. She fleshed out everything else 100% on her own, but she doesn’t take it anywhere particularly interesting or vital. At its worst, Queen & Slim feels like the most potent distillation of Waithe’s meteoric rise to poster-woman for acceptable diversity.

Sure, the elements of her writing that made her a name in the first place are here, although diminished, but in the dead spaces she’s filled the screen with the sort of low-effort backseat screenwriting that’s so du jour on Twitter, where casual viewers think all it takes to make a compelling movie is a cool premise and a handful of “unapologetically black” signifiers. This reduces an inherent complexity into a smoothed over, commodified version of blackness that’s as easy to market to artsy filmgoers as inopportune trap beats are in trendy gum commercials.

Queen & Slim is supposed to feel radical, otherworldly and a hard won exploration of finding freedom to exist in a world that doesn’t care if you die, but its protagonists remain nameless until they’re martyrs, trapped in the same cycle of poetic tragedy all black characters in arthouse cinema spin around in, only it’s supposed to feel freeing because, well, Solange is on the soundtrack.

Kaluuya and Turner-Smith are suitably fantastic, sure, but again, we have a film about a specifically African-American experience led by English actors, another hallmark of the recent spate of black films meant to feel revolutionary that nonetheless come off like commodities. It’s Matsoukas’ gift for capturing evocative images that supersede the issues in the film’s foundations enough to feel worthwhile.

Queen & Slim is a true coming out party for a director whose music video and commercial work has long presaged a future in features. Hopefully it’s also a growing experience for Waithe, not to lose sight of her strengths while the system seems so keen to turn her into little more than a shorthand for “hip and black.”