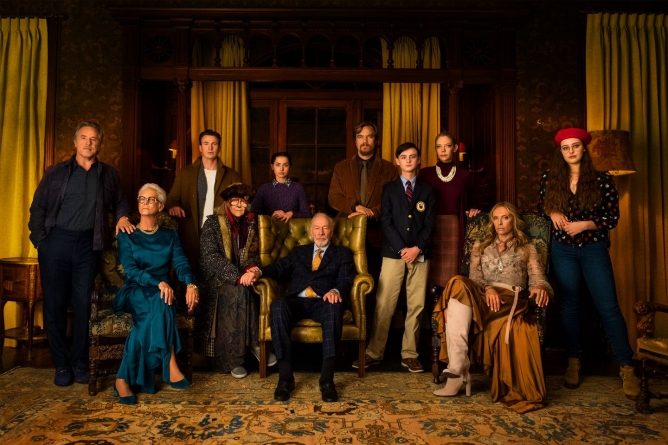 Though by no means groundbreaking, Knives Out is a charming addition in the popular cozy mystery subgenre.

Less than 30 minutes into Knives Out, Rian Johnson’s new murder mystery, one character quips that the New England mansion where much of the film is set feels like something right out of Clue. Though the reference may be jarringly meta, Johnson has created an update on the 1985 movie based on the board game, a “gentle” murder mystery that leans more on comedy and suspense than gore or violence.

A true blue “cozy mystery,” Knives Out is an entertaining, if harmless, examination of class warfare, not dissimilar to Gosford Park. This time, family patriarch and bestselling mystery writer, Harlan Thrombey (Christopher Plummer), is found with his throat slit following a birthday party where his goldbricking children and their descendants had gathered a few hours before. While the cops are ready to rule the death a suicide, a mysterious private detective named Benoit Blanc (played by Daniel Craig with an accent that seems based on Colonel Sanders) appears, hired by an anonymous patron, casting doubt on how Harlan died.

Just like any good mystery, everyone is a suspect. Could it be Harlan’s oldest daughter, Linda (Jamie Lee Curtis), an elegant, yet angry, real estate developer? Or what about her husband, Richard (Don Johnson), a MAGA-hat sporting blowhard whose secret affair Harlan threatened to expose just before his death? But what about Walt (Michael Shannon), a man-child who manages his father’s books and refers to them as “our novels”? Then there’s Walt’s trendsetting ex-wife, Joni (Toni Collette, fully lampooning Gwyneth Paltrow), who receives money from Harlan to put her daughter through school.

Each of these actors sink their teeth into their roles with scenery-chewing abandon, but Knives Out isn’t a movie about subtlety. This is especially obvious when viewed through the eyes of Marta (Ana de Armas), the young nurse who takes care of Harlan. To Harlan’s children, Marta may be “part of the family,” but no one cares enough to find out where she’s from. They tell Benoit that the nurse is from Uruguay, Brazil or any other South American country because to the Thrombeys, Marta is little more than the hired help. Benoit is interested in Marta for other reasons: the nurse is unable to lie. When she does tell a falsehood, she is so upset that she vomits. Now that’s a pretty good asset to someone investigating a murder.

Johnson subverts the genre by showing just how Harlan dies near the film’s midpoint. After that, it’s more about why rather than whodunit. Knives Out plays with time, twisting and bending over itself to show falsehoods, misconceptions and lies. Johnson and his actors attack the script with gusto, showing us just how far some people will go to make sure they receive their share of the inheritance.

Though by no means groundbreaking, Knives Out is a charming addition in the popular cozy mystery subgenre. There are still enough surprises to keep you guessing though, despite the film’s generous runtime. And even if the resolution to the mystery is nothing too surprising, Knives Out is still a fun way to spend a few hours in the cinema over the Thanksgiving holiday.