Where would Wanda be if released today, in the midst of the #MeToo movement? Overlooked upon its 1970 release, Barbara Loden’s independent film about a woman who drifts from one awful man to another is enjoying a wellspring in popularity thanks to a recent reissue campaign by the Criterion Collection. Once a hard to find curio, Wanda, which also starred and was written by Loden, is now easily available for cinephiles hoping to see this little gem.

We first meet Wanda Goronski, who Loden based on the true story of a woman involved in a botched crime, as she wakes up in the small shack where she lives near a coal deposit in Pennsylvania. Machinery rumbles just outside her window as she pulls herself off the couch. It’s another day in a cruel world for Wanda, who wanders outside, curlers in hair, her white outfit a floating ghost among the obsidian slagheaps. She walks to a courthouse where she arrives, late, for her own divorce hearing. Everyone in the tiny room seems perturbed by Wanda’s tardiness as her soon-to-be-ex-husband lists all of her failings as a wife and mother. She agrees. He can have the kids, Wanda says, they will be better off. 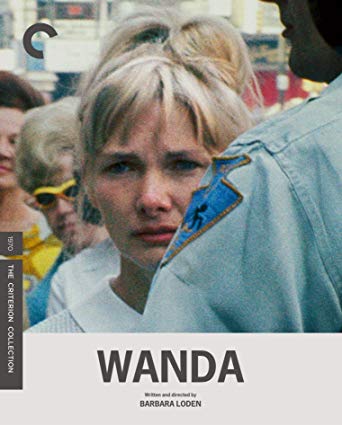 Freshly divorced, Wanda meets a traveling salesman and they go to a motel. This isn’t a match made in heaven, and soon after the encounter, the salesman ditches her in a cruel and unceremonious manner. Wanda doesn’t seem surprised. This isn’t the first time something like this has happened to her. Desperate for validation, Wanda soon meets Mr. Dennis (Michael Higgins) while he is robbing a bar. Though he treats her poorly—deriding her for looking cheap and even striking her—Wanda has nowhere else to go and follows Mr. Dennis on a short odyssey through northeastern Pennsylvania that culminates in a botched bank robbery in Scranton.

Wanda is difficult to watch, especially as Loden’s protagonist sinks deeper into degradation after hooking up with Mr. Dennis. There is a scrappy intensity to the film, shot for little more than $100,000. Loden, an actress-turned-filmmaker who married filmmaker Elia Kazan, disliked conventional filmmaking and preferred movies that hewed closer to real life such as documentaries. She also enjoyed the jumbled messiness of Warhol’s movies, and Wanda exists somewhere between those two poles.

So why would anyone want to watch Wanda, especially if the character does not sound like a “strong” woman? The film did win an award at the Venice Film Festival, but some prominent critics derided it, including Pauline Kael, who bemoaned its unattractive characters and unrelenting bleakness. Yet, Wanda didn’t materialize out of thin air. People like Wanda exist and have existed, a byproduct of the patriarchal society we live in that objectifies the volition out of some women. At the same time, she refuses to be defined, slipping loose the yoke of motherhood right at the start of the film.

Wanda was not the start to a bright career. Loden would die in 1980 following a battle with breast cancer. Her marriage to Kazan, who some likened to the men in Wanda for his treatment of Loden, had begun to fall apart. She was poised to adapt Kate Chopin’s The Awakening but her illness prevented that dream from being realized. When asked about the character in Wanda and how much of Loden’s own life went into the script, she would answer, “Until I was thirty, I had no identity of my own.” In this day and age, it is terrifying to think of someone growing up without an identity, bending to the will of others, but it still happens. There is still hope for Wanda as the movie comes to a close. She just needs to realize it herself.