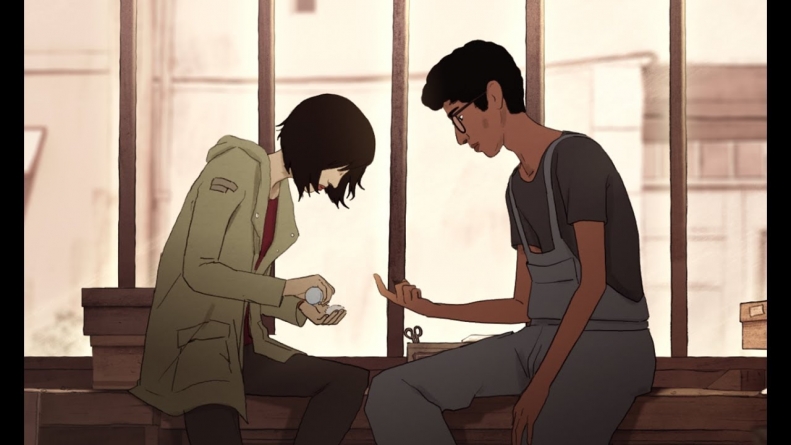 I Lost My Body wants to be a film about fate, and how to escape cycles of loss and loneliness.

I Lost My Body Matthew Apadula

For Naoufel, the protagonist and titular body of I Lost My Body, life is buffeted and defined by random twists of fate: a tragic and sudden loss, a missed connection and an endless chain of mistakes and uphill battles. Fate is something to be avoided, outsmarted, pushed against. And if you manage to outrun your fate? “You try to keep away from it,” Naoufel says. “You run blindly…and keep your fingers crossed.”

This bit of existentialism arrives nearly an hour into the film, as Naoufel sits perched on the railing of a building with Gabrielle, the object of his affection, who gamely humors his theories on the nature of the universe. This scene is meant to be romantic, layered with Dan Levy’s stirring score and the expanse of Paris’ urban sprawl. In real life, our most intimate moments don’t often lend themselves to discussions of fate. But I Lost My Body is fascinated, even preoccupied, by small instances like this, and labors lovingly to turn the most inconsequential moment into something resonant.

I Lost My Body, an animated feature from Jérémy Clapin, essentially twines two movies around one narrative: one, a rather by-the-numbers “quirky” romance; the other, an oddly gorgeous body horror fantasy where a disembodied hand—Naoufel’s, accidentally lopped off in the film’s opening seconds—treks doggedly across the city by itself to reunite with its owner. The clash of these stories coexisting in the same space is often jarring, but the film’s beautiful animation renders both worlds possible at once. The characters are drawn in a soft and generous definition, exact enough to convey the smallest tics of emotion, while the film’s Paris breathes with vibrant pastels and dynamic expression. Most of the film’s parts feel thoughtful and deliberate in their gentleness, but it’s in the film’s writing (from Clapin’s screenplay co-written with Amélie heavy Guillame Laurant) that I Lost My Body begins to lose itself.

Naoufel is an orphan, racked with guilt after surviving a car crash that killed both his parents, and after the accident his life as a young man (and inept pizza delivery guy) is suffocated by an abject loneliness. He suddenly finds a purpose again one fateful night when he fails to deliver Gabrielle’s pizza on time, and ends up falling for her while chatting through her apartment building’s intercom. Their meet-cute is undeniably sweet, and the visual romance between Naoufel and an intercom microphone is novel, to say the least. But the charming idiosyncrasy wears off quickly as Naoufel becomes determined to find Gabrielle, obsessively searching the phone book to find her last name, showing up unannounced at her job, following her home on the train and—most egregiously—becoming a carpenter’s apprentice at her uncle’s workshop for an excuse to be near her.

It isn’t the creepiest forced “romantic gesture” ever put to film, but the human story of I Lost My Body spends a great deal of time boxing Gabrielle into a shiny object to be pursued, and reframes Naoufel’s attempted connection as something desperate and selfish, even with his devastating past and the film’s striking visuals. The lack of depth in Naoufel’s pursuit of Gabrielle, whether thematically intentional or not, muddles the film’s professed understanding of fate and tragedy, in a way that’s alienating to a curious audience.

But it’s the journey of the hand that arguably saves the film, refocusing I Lost My Body into an engagingly bizarre and extremely literal odyssey. The animation of the hand comes off somehow both wonderful and grotesque as it hoists itself up walls, slumps in recognizable exhaustion, and even pauses to listen to the sounds of a piano. There’s no explanation given for how the hand came to life, or how it seems have all of Naoufel’s memories going back to his childhood, but that’s hardly the point. The hand just wants to go home. The animation’s soft-realism is crucial to the film’s power in these sequences: Pigeons and rats transform into monsters, a small frozen stream becomes a death trap, and an umbrella makes do as an unreliable parachute when the hand attempts to fly over a busy highway. I Lost My Body’s most human emotions originate from the hand’s need to be back where it belongs, struggling across a landscape made unfamiliar by another cruel twist of fate.

It’s this running visual metaphor that realigns the film’s priorities, and rescues I Lost My Body from its humdrum interludes. On the strength of its aesthetic alone, I Lost My Body is exceptional, with a visual style that deepens the film’s eccentricity while elevating the more conventional beats. And the film’s third act, when Naoufel’s and his hand’s stories converge, does manage to feel surprising, if somewhat weighed down by the frustrations in Naoufel’s storyline. I Lost My Body wants to be a film about fate, and how to escape cycles of loss and loneliness. But perhaps the most unexpected part, the film’s small moment that resonates the most, isn’t the disaffected young man finding love, but instead the disaffected young man gaining a new understanding of what it would mean for him to be whole again.

Matthew Apadula is a poet and critic who was born in New York and has been trying to get back home for a while now. His work has previously appeared on Popdust, GIGsoup Music and in Drunk in a Midnight Choir. His career aspirations include writing more poems, listening to more albums, and eventually dying in New York. Follow him on Twitter @imdoingmybest.