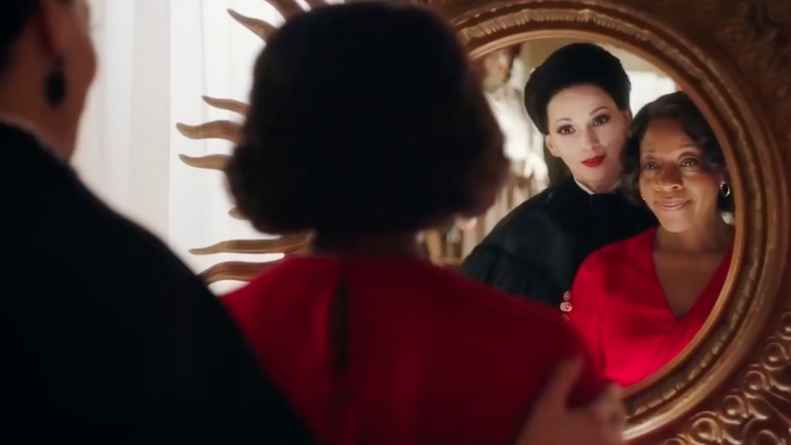 In Fabric wears its retro giallo indulgence on its sleeve.

In Fabric wears its retro giallo indulgence on its sleeve, as writer-director Peter Strickland’s heavily atmospheric, fashion-forward horror film about a killer dress relies more on impeccable stylization over anything approaching narrative coherence. With an eerie harpsichord-led score by Cavern of Anti-Matter and vivid cinematography awash in vibrant colors and images that deftly interchange between beauty and grotesquerie at the drop of a hat, the film weaves together pure Lynchian weirdness, Gilliamesque satire and twisted “Black Mirror”-level irony into an intoxicatingly unsettling experience that’s often funny in its unrelenting strangeness.

The murderous red cocktail dress in question, advertised as a one-of-a-kind, roosts at a department store tended by a mysterious clerk named Miss Luckmoore (Fatma Mohamed) who speaks in an inaccessible vernacular, her uncanny demeanor only enhanced when, behind closed doors, she removes her lush hair to reveal a perfectly bald pate. Traveling into the bowels of the store by dumbwaiter and cavorting with mannequins that possess evidently organic genitalia, she seems to do the bidding of a ghoulish, Peter Cushing-like Mr. Lundy (Richard Bremmer), whose flying ejaculate is given the slow-motion treatment in one preposterous scene. Suffice it to say this is perhaps not the best place to buy eveningwear.

But that doesn’t stop weary bank teller Sheila (Marianne Jean-Baptiste) from splurging on the little red number in preparation of a blind date, and much like the meetup, the fashionable purchase will end badly. With two overbearing bosses, Sheila’s job is oppressive, and her home life isn’t much better as her adult son Vince (Jaygann Ayeh), a fledgling photographer, makes things uncomfortable for her in his openly amorous interactions with his aggressive girlfriend Gwen (Gwendoline Christie). The sinisterly stitched garment makes its malevolent essence known subtly at first, by causing a rather nasty rash to bubble up on Sheila’s shoulder. But soon it’s possessing a washing machine and reconstituting itself after being torn to shreds by a dog. And when the totality of its supernatural, murderous nature finally comes to light, the dress inevitably finds its way into the hands of a new owner and fresh crop of potential victims.

These abrupt shifts from one plotline and set of characters to another makes the film even more enigmatic but also offers more potential to lampoon the mundanity of consumer culture. For such an abstruse film, this theme is rendered quite literally when the dress finds its way to a washing machine repairman (Leo Bill) who can induce trances by reciting technical manual jargon. In this way, the film comments on the purgatorial cycle of laboring at unfulfilling, mind-numbing jobs simply to achieve the means to accumulate possessions which will inevitably break down if they don’t kill us first. And yet Strickland never gets too heavy-handed with this critique, instead rightly focusing the majority of his effort on his truly bonkers premise.

In fact, it’s the director’s unrepentantly gleeful approach and artful handling of absurdity that allows In Fabric to transcend its B-movie material. When the red dress hovers menacingly in midair or envelops the face of a victim it intends to asphyxiate, such bizarre images seem almost natural in the surreal world of the film. With A24 becoming more and more synonymous with the recent surge in the much-ballyhooed “elevated horror” trend, their release of this infectious oddity demonstrates that the studio’s focus isn’t limited to stories rooted in dread, trauma and paranoia—sometimes we deserve to luxuriate guilt-free in sumptuous nonsense.