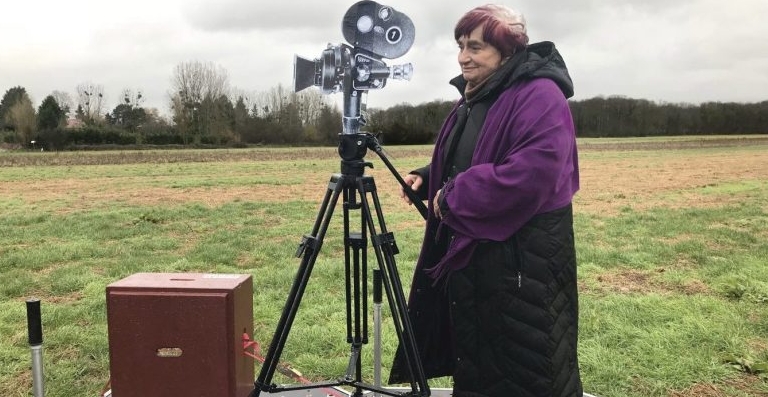 We are left to consider how this small, pleasant woman, nearly turned into a meme of affability in her final years, leaves behind one of the most vast and rich oeuvres of any film artist to date.

Varda by Agnès begins with a tranquil tour through its maker’s filmography, the credits laid over stills from various narrative features, documentaries and shorts from Agnès Varda’s six-decade career. The images are in blurred soft focus, perhaps a nod to the filmmaker’s own failing eyesight in her later years. Like so much of Varda’s work, the opening is so simple and tranquil but indicative of deeper aesthetic thought, offering an insight into its maker’s perspective. The rest of the film follows this mold, offering a pleasant escape for the viewer even as one is treated to the full range of Varda’s philosophy and style.

Structured as a kind of avant-garde masterclass, the film is grounded by various lectures the director gave in settings as diverse as classrooms, an art museum, even the Palais Garnier opera house. In all settings, Varda is humbly placed at a small table where she holds court, reading over notes as she recounts her work in nonlinear, associative terms. Within minutes, one gets a clear sense of how much of the director’s filmography, which spanned half the length of cinema history to date and encompassed so many kinds of movies, consisted of echoes of itself. Locations used in early shorts recur in later features, often unconsciously until Varda looks back and realizes connections that link her films.

Discussing her approach to filmmaking, Varda talks about her use of real people in documentaries. “Real people are the heart of my work,” she says late in the film, though she makes it abundantly clear from the start as she traverses her formidable nonfiction work (some of which is even included in her narrative films). She talks about being taken to meet a man named Varda when she visited San Francisco in the 1970s, and she shows outtake footage of her “meeting” the man that demonstrates how this moment of reality was subjected to the filmmaking process, with the ordinary painter having to record multiple takes in both English and French. As Varda says elsewhere, documentaries can be “raw and pure, reality only” but that she enjoys bringing the same filmmaking process to bear on her nonfiction that she does her other work.

When it comes to explaining that process, the director goes deeper here than she has on any of her recent, introspective features. Nearly all of Varda’s late-period movies feature playful reminiscences of her career in terms of subject matter and personal meaning, but here one finally gets a sense of what an exacting artist she could be. Far less showy than her male New Wave peers, Varda nonetheless knew exactly how to shoot her films to communicate the lives of her characters, real and fictional. She notes things like the way that Cléo from 5 to 7 transitions from a highly controlled, almost classical film in its interior first half to a more verité-like docu-fiction when the protagonist heads out into Parisian streets, or how Le Bonheur was inspired by impressionism and the mordant final works of Mozart. She obsessively details the tracking shots in Vagabond, revealing the mathematical calculation of each (one minute in length, roughly 10 minutes apart) and how she moved right to left in each to create a sense of dissonance compared to the direction that westerners read. The director even meets with Sandrine Bonnaire to discuss their collaboration, which reveals that Varda could be exacting with actors as Bonnaire fondly recalls all of the things she had to learn and do to realistically play a drifter. Varda warmly relates all of these small details to the audience, but there is a note of pride in her voice as she does so, as if she is finally asserting that she thought every bit as aesthetically, and with as broad a range of artistic inspiration, as the Godards and Truffauts.

The free-associative nature of the editing, which begins to hop around Varda’s filmography out of chronological order to make connections both obvious and subliminal, illuminates much of the director’s earlier films. Admittedly, the fact that Varda has been working this self-reflective model for a decade makes some of the observations of the final act, where the film turns to the likes of The Beaches of Agnès and Faces Places, slightly redundant, and it’s here where things turn into more of a clip show than a deconstruction. Even here, however, the filmmaker provides enough background information that one gains an even greater degree of appreciation for these films.

In many respects, Varda had been making “swan songs” as far back as The Beaches of Agnès, each new feature possessed of a reflective, benedictory quality that could be seen as an act of hedging her bets should age catch up with her. In that sense, Varda by Agnès may be less the director’s definitive act of farewell than the one that just so happened to stick. Even so, it’s hard not to imagine her using this film to say goodbye. “We need to know why we do this work,” she says early on about how the act of exhibiting art is as crucial as its creation to clarify what the art means, and by airing the technical details of her life’s work alongside its moral and political philosophy, she uses her final film to make the case for what she is leaving behind. Varda’s filmography is rich with social meaning, technical experimentation, even the esoterica of personal memory, and as she sits on a beach in the final shot as winds buffet her with sand until she disappears from view, we are left to consider how this small, pleasant woman, nearly turned into a meme of affability in her final years, leaves behind one of the most vast and rich oeuvres of any film artist to date.