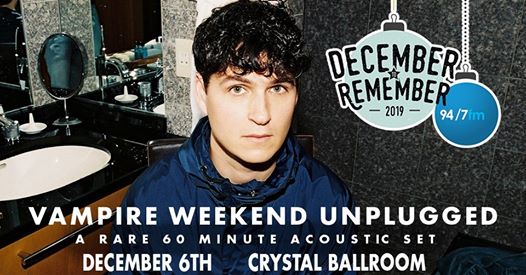 The looser confines of the acoustic show allowed for a more playful setlist.

For those of us living in Portland, 94.7’s annual December to Remember gifts music fans with bands playing the 1,500-capacity Crystal Ballroom that would usually appear in a much bigger room. In the past, acts arena-capable acts such as Weezer have graced the Crystal’s stage as part of the series. This year is no different as the Raconteurs, Spoon, Phantogram and others have come to town.

Perhaps the biggest name on the list is Vampire Weekend, who stopped here in September and played a sold-out show at a much larger venue behind recent album Father of the Bride. Billed as a 60-minute acoustic performance, Ezra Koenig and company rewarded the excited crowd with an excellent performance and by playing longer than the time in the listing (which seemed unfair for a show with a $70 price tag).

The 18-song setlist leaned heavy on the band’s self-titled debut and Father of the Bride, along with a smattering of other favorites and rarities. The six-piece band took the stage at precisely 8pm with Koenig, bassist Chris Baio and guitarist Brian Robert Jones seated in the front while Garrett Ray (drums), Will Canzoneri (piano) and Greta Morgan (guitar) set up behind them. Though Koenig and Jones played acoustic guitars, Baio sported an electric bass, something that led Koenig to quip that the concert was “semi-acoustic.”

Koenig kicked off the show with new song “Harmony Hall,” permitting the audience to erupt in applause and the opportunity to sing along. A sense of adventure hung over the set as the acoustic arrangements allowed the band to try something different from their typical, road-tested material. “A-Punk” and “Oxford Comma” sounded slower and breezier without some of the more ornate arrangements. Koenig restarted “Sunflower” after a botched beginning, claiming that they had never tried it on the shorter necks of acoustic guitars. Meanwhile, new material such as “Married in a Gold Rush,” which featured a duet between Koenig and Morgan, worked great in a stripped-down form.

The looser confines of the acoustic show allowed for a more playful setlist. Koenig covered New Jersey hero Bruce Springsteen’s “I’m Goin’ Down” and even ventured to play rarity “Mountain Brews” after a fan requested it. With the hour deadline hanging over the show, it felt great when Koenig announced that since no one else coming on after them, they may as well keep playing, honoring requests for “Horchata,” “Campus” and “2021” while doing snippets of “Bohemian Rhapsody” and “Bryn.”

Following “Mansard Roof,” Koenig and company played “Little Drummer Boy” which morphed into “Obvious Bicycle” and then changed into “Son of a Preacher Man.” It was an appropriately festive way to close out the evening and as we passed by the giant Christmas tree towering over the back of the Crystal Ballroom, a warm feeling settled over the crowd, satisfied by seeing a favorite band in a venue it has long outgrown.