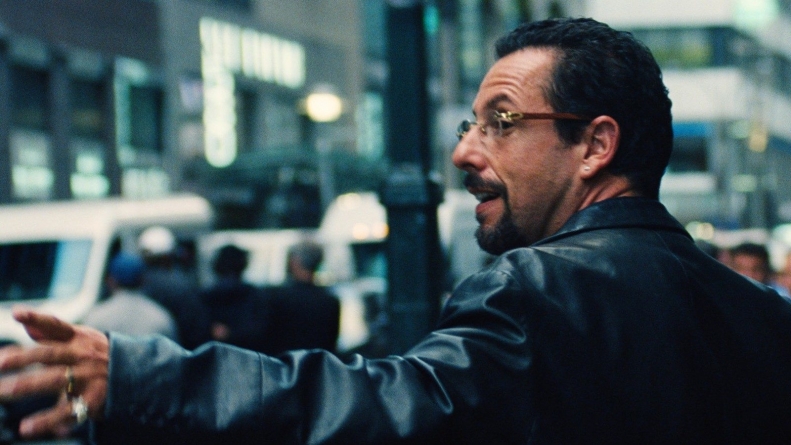 A stark, turbulent and mesmerizing ride-along with one man’s futile navigation of late capitalism’s darker and more fickle realms in pursuit of a windfall that always seems just over the horizon.

The hollowness of materialism is on full display in the Safdie brothers’ anxiety-inducing Uncut Gems. Frenetic jeweler and gambling addict Howard Ratner (Adam Sandler) incessantly prowls for the next big score, wheeling and dealing in order to keep afloat even as his mounting debts get him dangled from a window by his ankles or locked in the trunk of his car at his kid’s school pageant. He’s driven by his own insatiability, unable to fill the hole inside himself no matter how hard he tries, making the brazen, impulse-driven huckster a walking allegory for the unsustainability of late capitalism—he can’t possibly keep all the saucers spinning forever.

While some people are paralyzed by fear and others are fueled by it, fear rarely enters the equation with Howard. He’s all id and kinetic energy, a bull in a china shop who just so happens to own a jewelry store in NYC’s Diamond District. Even when his long-shot scheme to acquire a rare black opal—a kaleidoscopic stone that looks magical even in the rough—is about to pay off, the object of his desire isn’t in his hand for more than a few minutes before he’s loaning it to a famous customer, Celtics star Kevin Garnett (himself), who believes the rock possesses mystical powers that will bestow good fortune upon him as he plays in the 2012 Eastern Conference semifinals. As collateral, Howard takes possession of Garnett’s 2008 NBA championship ring. He promptly pawns it (temporarily, in his mind) in order to secure the funds to place a bet on Garnett’s opal-enhanced performance.

As one might expect, Howard’s personal life is a mess. His marriage to Dinah (Idina Menzel) is a façade for the benefit of the kids that’s nevertheless still in its death throes. His girlfriend and employee, Julia (Julia Fox), will seemingly do anything for him, but still can’t help but stick her hand down the pants of The Weeknd (himself) at a high-profile party. Howard’s kids, spoiled as they are with lavish luxuries, barely know him and expect little from him since he can’t even manage to make it through a full school performance without getting hauled off by thugs working for his loan-shark brother-in-law, Arno (Eric Bogosian). And despite his hubris and volatile temperament, Howard is still rife with self-loathing, which compels him to perpetually seek the temporary relief of fleeting pleasures and the not-so-cheap thrill of going all-in with his feverish pursuit of that elusive life-changing payday.

On the surface, Adam Sandler’s portrayal of Howard appears as the polar opposite of the only other spellbinding dramatic performance on Sandler’s résumé, the milquetoast novelty-company owner Barry Egan in 2002’s Punch-Drunk Love. And yet, though Barry may have been painfully repressed and Howard is brash to his detriment, both march through their respective films driven by a singular focus, with Barry fixated on scoring a lifetime of free airline miles from a Healthy Choice promotion loophole and Howard expecting a mammoth payday either through the auction of his giant opal or from its good-luck charm properties leading to his winning an unlikely NBA parlay bet. The Safdie brothers frantic pacing is more jarring than Paul Thomas Anderson’s approach in Punch-Drunk Love, and Sandler’s respective characters trend in opposite directions, with Barry grasping at serendipity and Howard barreling headlong into peril. But Sandler’s Janus-faced portrayal of these two characters nevertheless taps into the same well of desperation that he’s perhaps uniquely capable of rendering this distinctively onscreen.

Uncut Gems also bears a two-sides-of-the-same-coin resemblance to the Safdie brothers’ acclaimed 2017 film Good Time. There, the directing duo showcased the humanity behind scrappy criminals near the bottom rungs of income inequality, whereas this latest film illustrates the soulless (if largely legal) excess that’s inherent to rubbing shoulders with those closer to the top. And yet, despite his frenzied efforts, Howard remains small-time in many ways, hawking tacky jewel-encrusted Furby necklaces and goading a family member (Judd Hirsch) to falsely drive up the bids on the black opal at auction. The Safdies don’t offer a cautionary tale, glorification of greed or in-depth character study, but rather a stark, turbulent and mesmerizing ride-along with one man’s futile navigation of late capitalism’s darker and more fickle realms in pursuit of a windfall that always seems just over the horizon.