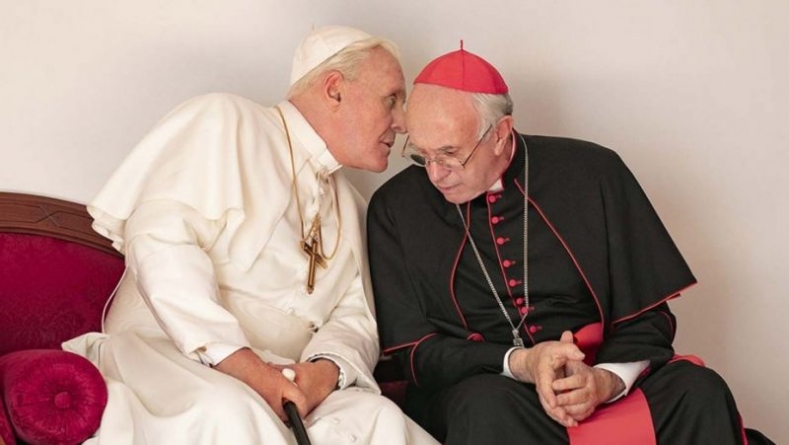 By the time that things turn back to the present and Benedict prepares to resign over scandals, the momentum of both the narrative and the interactions between the actors is irreparably derailed.

Fernando Meirelles’ The Two Popes establishes a satiric tone from the start. Its opening scene, of Argentinian cardinal Jorge Bergoglio (Jonathan Pryce) awkwardly attempting to adjust to his new life as Pope Francis by failing to book transportation with an annoyed travel agent, pokes fun at the ever-widening disconnect of a position as ensconced as pope in a modern world. Similarly, when the film then flashes back to the papal election of 2005, Meirelles films the secret voting rituals of cardinals like an Armando Iannucci satire, all politicking behind closed doors to determine who will be chosen as God’s direct emissary on Earth. No one glad-hands more than Joseph Ratzinger (Anthony Hopkins), who travels from table to table like someone running for local office over supreme pontiff. Ratzinger indeed wins, though amusingly Bergoglio, who never once put his name forward for candidacy, comes in second place.

This satirical tone, established within minutes, provides a bedrock that soon contrasts with the tenor of the film when it jumps forward to 2012 to find Ratzinger, now Pope Benedict XVI, the head of a Church rocked by sex scandals. Everything one needs to know about the pope’s response to crimes amid the clergy is communicated by Bergoglio’s journey to see him. The Argentinian, looking to resign as cardinal over his distaste with what the Church has become, sees what disgusts him reflected in Benedict meeting him not in the Vatican but a lavish summer residence where, even in private, the most formal customs of dress and behavior are observed.

Ostensibly summoning Bergoglio to dissuade him from resigning, Benedict soon uses his captive audience as a sounding board to voice his opinions on faith and modernity’s impact on Catholicism. Bergoglio, his ideological opposite, responds in kind, and soon the two are passionately debating every point. Sarcasm abounds as each passive-aggressively mocks the other’s views, and through their baiting jabs one can see the schism driving through the Church between traditionalists and reformists. Both Hopkins and Pryce sell the distinctions between the two men subtly. Pryce exudes the affable earthiness of the Jesuit Bergoglio in sharp contrast to Benedict’s hunched-over, nervous introversion. One glance at Benedict’s blatant discomfort around anyone makes one wonder why he lobbied so hard to become the supreme pontiff, and the actors wring a great deal of interactional comedy from Bergoglio’s exasperation at Benedict’s huffy narcissism.

It is in the dialogues between the pope and the critical cardinal that the film finally settles into its purpose, playing each man’s demeanor off of the other to enumerate philosophical discrepancies. For Benedict, the image of the Church as a beacon of strength and unchanging dogma must be maintained above all, especially in the wake of what he deems to be an unacceptable social evolution into relativism and permissiveness. Bergoglio, meanwhile, argues that Catholics must live closer to the teachings of Jesus, renouncing luxury to serve the world’s poor. The two needle each other over their respective stridency, and Pryce and Hopkins wring a wry chemistry out of the ways that Benedict and Bergoglio are more alike than they might think.

Indeed, the actors are so good at subtly teasing the ways that the two men are similar that the film’s subsequent turn to flashback and extended monologues to explain each man’s darker aspects can be largely redundant. The film clearly favors Bergoglio and his Jesuit outlook, but an extended travelogue into his controversial past during Argentina’s Dirty War feels like an attempt to justify, not complicate, the man’s legacy. That’s not to say that the film lies about Bergoglio, but as much time as it spends ruminating on the complex events and actions that compromise the Church, the extent to which it explains away the cardinal’s unwitting role in putting priests in harm’s way of the Argentinian junta feels like apologia, not apology. This is especially glaring when one considers how deftly the film later establishes parallels of Bergoglio’s attempts to protect the clergy over average citizens to Benedict’s own role in defending and covering for priests embroiled in the molestation scandals, both men reflexively protecting the shepherds, not the flocks.

By the time that things turn back to the present and Benedict prepares to resign over said scandals, the momentum of both the narrative and the interactions between the actors is irreparably derailed. It’s a shame, as the film’s final act brings out the best in Pryce and Hopkins, who show an equilibrium emerging between the two men as they come to understand one another. As an empathetic, muted comedy, The Two Popes is breezy but delightful, dancing around complex issues and equally complex answers while rooting the energy in the prickly chemistry between the leads. As a more direct confrontation with the personal and structural failings of the men and the institution they represent, however, the film retreats into sentimentality and absolution, losing the less resolute quality of its spirited theological and political debates.