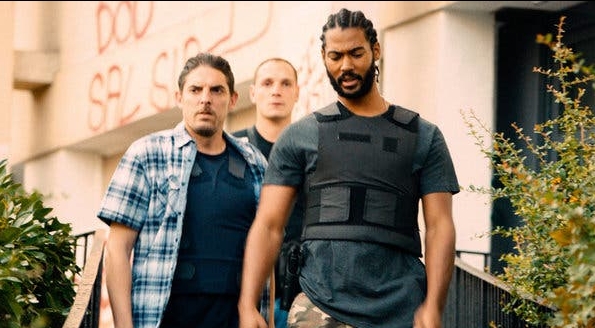 An open discussion brought to life through cinema.

Hubris is one hell of a thing, and there’s plenty to spare in Ladj Ly’s compelling debut feature, Les Misérables. Performative pride courses through every vein of this movie as we examine the quotidian chaos of Montfermeil’s law and order system, where an anti-crime brigade known as the Street Crimes Unit roams the suburb day and night. New to the SCU is Stéphane (Damien Bonnard), who is shown the ropes by Chris (Alexis Manenti) and Gwada (Djibril Zonga) during a day that rapidly deteriorates into disorder with moral and mortal consequences alike.

There’s an immediate air of Training Day in the movie’s initial narrative. Chris is a consummate asshole, his uniform a black T-shirt with VENOM sprawled across the back from waist to neck. During the movie’s first section, we witness Chris stop and frisk a 15-year-old girl, spew six-letter ‘R’ and ‘F’ words at citizens, overuse his force on adults and children alike, and laugh it all off with a disgusting swagger that reminds you of a MAGA troll, a sex pest and your mom’s new shitty boyfriend all at once. In a single word, he’s reprehensible. Gwada, quiet and culpable, watches from the sidelines and subtly participates in Chris’ human rights violations. At times, even with a smile. Meanwhile, Stéphane is the stand-in for the rest of us, his look of horror always suggesting a man who’s grappling with how to do the right thing in his undesirable circumstances.

That’s another clear influence on the film—Spike Lee’s seminal Do the Right Thing. The script by Ly, Giordano Gederlini and Manenti (based on Ly’s short film of the same name) honors Lee’s work through its equally challenging narrative, yet also overcomes the risks of becoming a mere facsimile of what Spike’s joint was trying to say. The same message is there, yet told in new and exciting ways through Ly’s sharp visual storytelling and the screenplay’s shattering social commentary. Nothing can quite compare to Do the Right Thing and it’s doubtful anything ever truly will, but Les Misérables proves that the comparison is unnecessary. It becomes its own entity, and is all the better for it.

As we explore the activities of this SCU trio, the film also introduces us to two young boys—Issa (Issa Perica) and Buzz (Al-Hassan Ly). The former becomes involved in an admittedly goofy plot involving a lion cub snatched from a local circus, but it’s when his story, Buzz’s story and the stories of these three law enforcers collide that the film truly finds the footing of its thesis. But Ly takes it one step further during the movie’s shocking finale, where the aforementioned hubris comes swarming in like a million killer bees. In the end, Ly leaves us with more questions than answers, and that’s the point.

The cut to credits isn’t cathartic; it’s anything but, still breathtaking but not for the reasons one would think. And Ly never lectures either. No. This film is an open discussion brought to life through cinema. And the genius of Les Misérables is that the discussion continues long after the screen goes black, as its final image stays seared into the screen and your mind alike. Difficult, yet honest, it packs a true wallop.