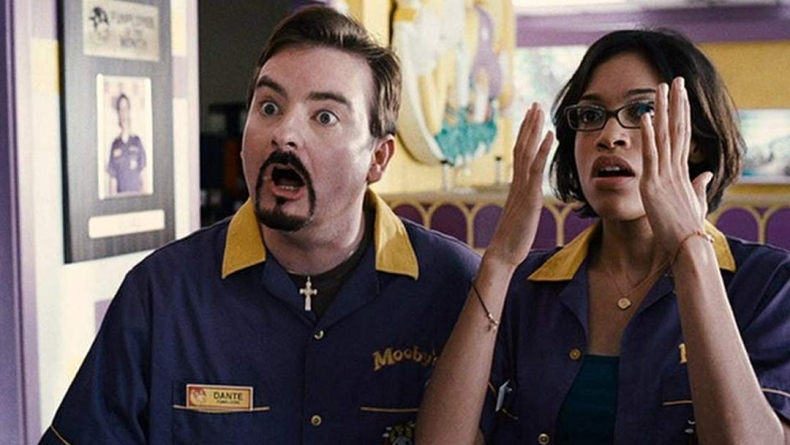 Clerks 2 is Kevin Smith’s masterpiece. It is a story about second chances for the two sets of heterosexual male life mates that launched the New Jersey native’s career, Dante Hicks and Randal Graves and Jay and Silent Bob. These characters are avatars of Smith’s life before the first Clerks and stand-ins from an alternate future where no chances were ever taken and putting in one’s two-week-notice represents an act of immeasurable courage. By extension, they signify all suburban boys who stayed at their jobs as stock boys, cashiers, and clerks for so long that friends from high school who lost touch knew exactly where to reconnect. Smith is the patron saint of undereducated but clever young men outpaced by the world around them whose concept of time is dulled by the rut of full-time employment in retail. By that definition, he is the great filmmaker of Generation X, a disaffected demographic in their 20’s that one day woke up in their 30’s with that panicked feeling that life is over.

Clerks 2 begins where its predecessor left off, a black and white any day in Dante’s life. For the uninitiated, Dante (Brian O’Halloran) embodies the type of employee retailers love. He always shows up on time and will perform admirably in the best interest of his employer even to the detriment of his own soul. Dante pulls up to his personal circle of Hell, the Quick Stop, in his late ‘80s American-made car, but when he opens up the metal security grate the place is a literal inferno. The flames introduce color into the film, making Dante a reverse Dorothy who exits black and white fantasy for a stark, colorful reality. All he has known is gone, but the force of nature that unmoored him is the incompetence of his best friend, Randal (Jeff Anderson), a man of great wit and observation who can’t remember to turn the coffee pot off at night.

Desperation takes them to Mooby’s, the McDonald’s of Smith’s Askewniverse, where they learn to flip burgers in their early 30’s, and a year passes while Dante’s fortune seems to change. He has fallen in love with Emma (Jennifer Schwalbach Smith), who offers the promise of a new life in Florida where Dante will work for her father’s car wash chain. His last day at the Quick Stop was tragic while his last hours at Mooby’s offer the hope of a new beginning. Also in the market for a fresh start and a new wall to lean on, Jay and Silent Bob appear fresh out of rehab but back to their drug dealing ways. Things grow more complicated for all involved, especially when Dante realizes he’s in love with his boss, Becky (Rosario Dawson), and honestly, who could blame him?

It’s difficult to remember what kind of a world we lived in when this film was released in 2006, but those of us who grew up with Smith felt the resonance of the movie’s message. Dante and Randal are two of the guys at our collective lunch table in high school, spouting vulgarities about sex, religion, race and sexuality without any experience of the world. That these East Coast heathens are mere train rides away from Manhattan makes their insularity even more tragic and their fears even more universal. Smith is gently prodding his fans to take charge of their lives in any small way they can because it is all fleeting, but he does so with dick jokes, a technique that adds to the salience yet most dramaturgy avoids. Seizing the day is what matters, and that looks different for everyone. For Dante and Randal, it means buying the Quick-Stop and reopening it. For Jay and Silent Bob, it means loaning them the money so they can return to their ersatz home.

Most importantly, this is a film about love and men professing their feelings for one another in a way that usually only happens in a work of fiction. More than a few of Smith’s fans come for the pussy trolls and donkey shows with no intention of listening to the heart of the film, but Smith has Randal tell Dante he loves him. The moment is moving, unexpected and one that’s necessary to here, and Anderson delivers it so vulnerably, removing Randal’s wiseass sheen for something more honest.

This was one of the many times the Askewniverse was supposed to end, but it is back to in full production which is only fair. Smith helped prepare Hollywood for connected universes, comic books, Stan Lee cameos and power of fandom, so it is only just that he reap the reward and play with his old toys again. Kevin Smith is a public good and the movie business is better when he’s in it, and one can only hope that the adventures of his characters continue to surprise us. It will be hard to match Clerks 2, his mid-career jewel, but there is no other filmmaker who can be trusted to broker in the crass and deliver poignancy.