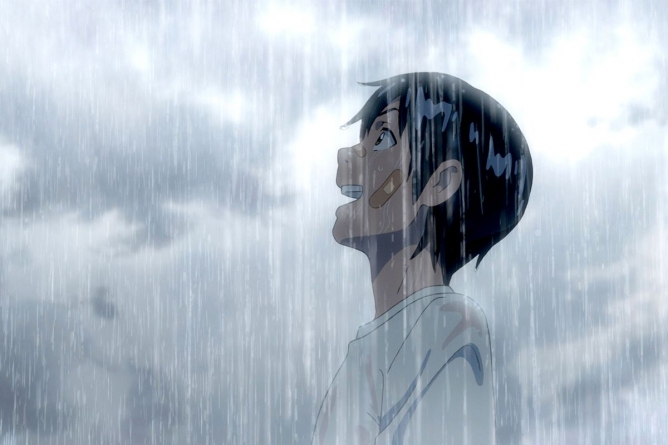 Shinkai’s films contain some of the finest animation in contemporary anime.

Weathering with You Jake Cole

Makoto Shinkai’s films contain some of the finest animation in contemporary anime, a blend of photorealistic detail with impressionistic light and color that renders Japan as a place both tactile and imagined. Weathering with You begins with Tokyo awash in a brutal rainstorm that literally clouds the city, rendering it through endless streaks that slice through the moldy grime of damp walls. But when Hina (Nana Mori) gazes out the window of the hospital room where her mother lays dying, she sees a single sunbeam piercing the cloud cover and shining on a location in the distance. Drawn to it as if hunting the pot of gold at the end of a rainbow, Hina heads across the city to find the sun shining on a Shinto gate, where she prays for a sunny day to cheer up her mom. Amazingly, the prayer works, halting, then reversing the course of rain and opening the sky to pure sunlight that turns Tokyo from a nasty, sharply drawn metropolis into an effervescent, chromatic paradise.

Like Shinkai’s massive international breakthrough, Your Name, Weathering with You presents a supernatural love story bonding two teenagers who each face existential crossroads. Hina, now aware of her powers of weather control, eventually meets Hodaka (Kotaro Daigo), a runaway hiding out from truant officers forever in search of unaccompanied minors to return to their parents. The film’s early stretch quickly turns into a bouncy account of both characters, with Hodaka getting a job from a gruff but affectionate publisher, Suga (Shun Oguri), and befriending the man’s niece, Natsumi (Tsubasa Honda), along with Hina. Pop music montages establish the carefree attitude of this self-actualization, setting the stage for the romance between Hodaka and Hina.

Then, Shinkai begins to introduce ominous tones. Hodaka accidentally comes into possession of a gun, and the film highlights the rarity of firearms in Japanese society when Hodaka brandishes the weapon against an attacking bully and terrifies not only his tormentor but Hina, who is so disgusted by his possession of a gun and the boy’s firing of a warning shot that only Hodaka’s instant, tearful regret heals their friendship. More pressingly, rain continues to fall daily in Tokyo, to the point that Hodaka and Hina decide to start a business selling Hina’s superpowers to event planners who need a sunny day for weddings and business functions. The capitalization of Hina’s unearthly abilities is at first rendered cheerfully, but even as the kids rake in cash to support themselves, the grotesquerie of having to constantly intervene in the weather, and doing so for a fee, starts to unmoor the film’s youthful vigor.

The endless rain gradually becomes the film’s focus, presenting a climate-change horrorshow in the background of the characters’ oblivious lovesickness. Mossy green splotches begin to appear everywhere in the backgrounds of shots, and more and more of Tokyo begins to disappear underneath standing water. Intriguingly, Shinkai depicts the city’s slow drowning with remarkable ambivalence, with citizens noting the terrible weather but wading their ways through normal routine with a steadiness that verges on willful ignorance. It’s a bleak view of general resignation toward climate change disaster, and a late conversation with a woman who notes that Tokyo may simply be returning to a watery state that defined it as recently as a few centuries ago speaks to a subtle nihilism among those who will still go to work and school even as their homes vanish.

Eventually, a link between the endless rain and Hina’s powers is discovered, forcing Hodaka to weigh his love for the girl against the wider threat posed to Japan. As he did with Your Name, Shinkai blends uplifting romance with a clear-headed pessimism that is bracing in its contrast. There’s a sick beauty to Tokyo seen through a screen of water, its neon signs pulsing brighter in the rain and streaking across every puddle and submerged street. The sharply textured animation gives way to blurred, incomplete backdrops, where the only things that remain vividly drawn are the logos and brand names of corporate products (an IMAX theater sign burns bright above flooded streets, and the Apple logo is ubiquitous on kids’ phones). Such subtle but pointed details add another wrinkle to the film’s fatalistic expectation of a drowned future, and in that context, one can better understand how Hodaka’s love might drive him to accept the inevitable if it means having someone with whom to face the apocalypse.