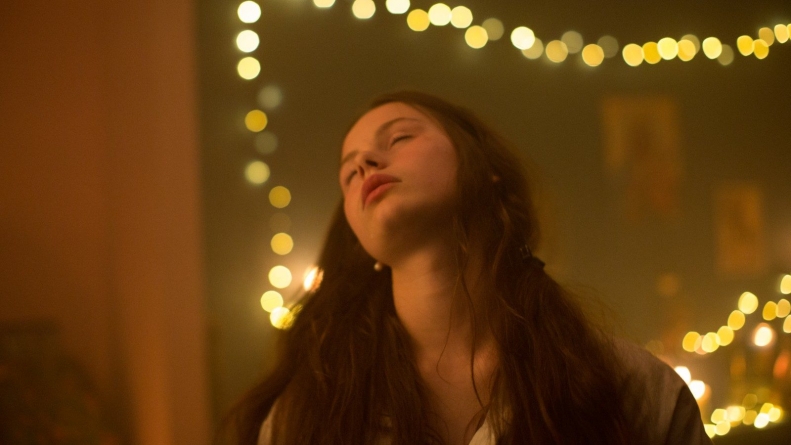 An at-times impenetrable film that serves as a forceful urging to consider how everything is connected.

Nearly two decades after his first feature, Bertrand Bonello is by now well-known for a certain style of haunting unpredictability, in which marginalized characters are caught up in sweeping societal shifts that then become literalized in surprising ways. His films exist in a hazy netherworld of graceful semi-horror, in which straight-faced realism is lacerated by jarring expressionistic flourishes. Following 2016’s Nocturama, a slick pastiche of teen rebellion movies that sets up a clash between puritanical revolutionary politics and commodity fetishism, he maintains a youthful focus with Zombi Child, an eerie, often obscure drama set largely at a girls’ boarding school. The results are intriguing but also frustratingly hard to parse, another appropriately puzzling move for a director adept at keeping audiences on their toes.

This obscurity is part aesthetic platform, part sensory overload, the latter quality due in large part to the amount of narrative ground covered. Zombi Child spends its 103-minute running time operating as two (or even three) movies at once, condensing gulfs of time, distance and culture within a rolling simmer of styles and forms. A story of undead rebellion that hearkens back to the roots of the zombie myth, it invokes vintage pulp like I Walked with a Zombie while applying a forceful corrective to such an exoticizing worldview. An anthropological look at modern Haitian ritual thus counterposes the general air of mystical otherworldliness, as the film purports to tell the true story of a man drugged into a form of institutionalized half-death, which is presented as more an economic state than a supernatural one.

The protagonist here initially seems to be Fanny (Louise Labeque), a passionate teen attending the prestigious Legion of Honor boarding school on the outskirts of Paris. Originally founded by Napoleon, the academy remains a place for the children and grandchildren of those who’ve won various orders of civilian and military merit to earn a top-tier education. Arrayed around Fanny, who daydreams and delivers voiceovers of passionate letters to a long-distance boyfriend, the film seems fixed in a certain privileged economic milieu. This shifts as the focus swings to her new friend Mélissa (Wislanda Louimat), whose mother, since killed in the 2010 Haitian earthquake, was a Legion of Honor recipient, but whose interests, upbringing and skin color otherwise mark her as a definite outsider. Allowed to join Fanny’s tight clique of literary girls after extemporaneously delivering a poem during a candlelit induction ritual, Mélissa is pressured into simultaneously downplaying her differences from the other girls, while also accentuating them to keep their attention.

That rite, in which Mélissa hints at a familial connection to voodoo practice, establishes the film’s focus on performance, and the character remains the primary conduit for this concept. An orphaned refugee now living with her aunt, she remains a resolutely modern kid, obsessed with Rihanna (on whom she gives an oral presentation), while also tapped into the enduring traditions of her past. These traditions are displayed even more clearly in the character of her aunt Katy (Katiana Milfort), a Mambo priestess who appears late in the movie and carves out her own prominent space in the narrative.

Katy’s presence serves as an affirmatory nod to qualities shown in gestational form in Mélissa, while also explaining the film’s frequent cutaways to ‘60s-era Haiti, where a man makes a nocturnal journey back to the land of the living. The figure here, later revealed to be Katy’s father, is a farmer who experiences a seemingly fatal illness and wakes up a slave, forced to cut sugarcane in a moonlit field, surrounded by similarly zombified individuals. He escapes after desperately snatching a piece of chicken, an act of impulse which breaks the spell, and sets him off on a ramble across the countryside that matches the movie’s overall segue into a meandering nocturnal spookiness.

Colonial history is a heavy presence throughout all of this, its presence felt in every interaction and exchange, both in scenes set in France and those playing out in Haiti. Bonello peppers in additional reminders of France’s unwilling separation from its former holding, the Western Hemisphere’s second oldest republic, and the onus of debt they later placed upon them at gunpoint. There’s also repeated gestures to the way pedagogy maintains this inequitable state of affairs, including textbooks that follow the country’s 2005 mandate to teaching the “positive aspects” of colonialism. Such demands also make their way into the main narrative itself, as ritualistic practice is turned into a whimsical escape for the lovesick Fanny, who does not realize the depth of the forces she is dealing with.

Throughout all this, Zombi Child seems stylistically fascinating but also scattered, a gorgeous meditation on history that’s also a bit short of a coherent storyline. Yet this presentation makes more sense if the subplots are viewed in proper context, as intentional displacements of the film’s primary conflict. This is one rooted in racial tension, as exemplified by the sort of everyday microaggressions that don’t merit an individual response, but collectively take a lasting toll. As in House of Pleasures, where the travails of 19th-century brothel workers became violently transposed onto the present day, Bonello seems intent on displaying how economic and social issues are mirrored across chronological and national boundaries. Dislocating its core concerns and seeding them throughout several different settings, Zombi Child represents a definite development of the bold historical fracturing toyed with in Nocturama, making for an at-times impenetrable film that serves as a forceful urging to consider how everything is connected.