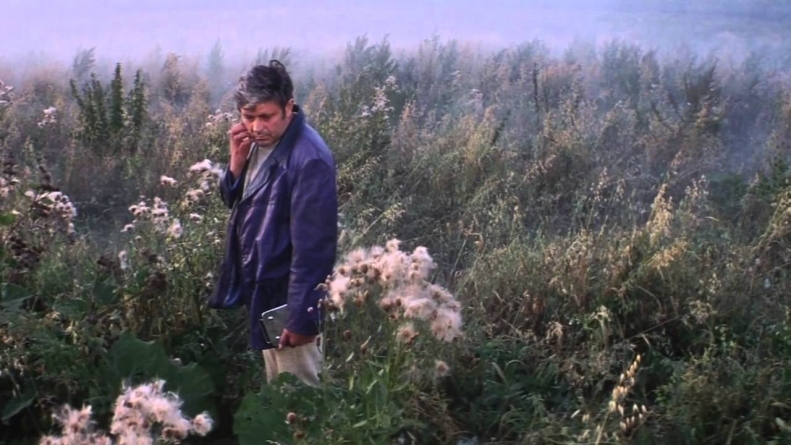 Sci-fi pushed to the boundaries of its analytical potential, employed as a means for recontextualizing issues besetting contemporary society, interpreted through a longer lens of enduring human experience.

More than anything else, Andrei Tarkovsky is a director of the ineffable, creating works suffused with a sprawling sense of wonder, the outcomes of which always result in more questions than answers. A spiritual filmmaker operating within the bureaucratic confines of an anti-religious state, he sought out scenarios that would allow for alternative means of divine reflection, often exploiting genre material as a covert means to explore the nexus between such themes and political and emotional realities. Whether delving into national or personal history, interrogating the past or the grimier nether-regions of the near future, he tended to construct these projects around the teeming vibrancy of the outdoors, centering on the kinds of reserved landscapes that lie beyond man’s inherent understanding, places whose placidity encourages the sort of deep contemplation that pairs neatly with the films’ philosophical underpinnings.

This style takes multiple forms in Solaris, a film focused on the uneasy interplay between two different, equally mysterious worlds, the enigmas of our own contrasted with the alien desires of a potentially sentient planet with ethereal powers. Loosely inspired by Stanisław Lem’s 1961 novel, which operates in the narrower confines of gothic horror transposed onto a haunted space station setting, Tarkovsky opens up the possibilities via a uniquely cinematic angle of approach. What follows represents sci-fi pushed to the boundaries of its analytical potential, employed as a means for recontextualizing issues besetting contemporary society, interpreted through a longer lens of enduring human experience.

Immediately signaling its twin focus on brilliant textural cinematography and weighty metaphysical concerns, Solaris spends nearly 40 minutes on one long scene set on Earth, getting down to business before outer space even enters the picture. Much of that time is expended establishing a melancholy, contemplative aura around former cosmonaut Kris Kelvin (Donatas Banionis), now swathed in a reverie of naturalistic serenity, surrounded by the green lushness of his parents’ forest dacha. Equal length here is given to a free-ranging discussion of technical processes and abstract cosmic possibilities, one of several such disquisitions in the film, which repeatedly halts its flow to entertain various dialectical scenarios.

Such discussions feel like an imposition upon the already slowly unfolding plot, a verbal roadblock that’s essential to establishing the unorthodox handling of time, it’s implication of a future that will not come and a present that seems overrun with dispiriting potentialities. The past, meanwhile, is a dominant presence, literally manifested via ghostly apparitions who also possess solid form, actual consciousness and emotions of their own. The same kind of apprehensive collision between temporal states suffuses the initial arrival of government officials upon the family farm, disrupting a present-focused vision of something resembling paradise, as reeds shimmer beneath rushing water, a horse runs free, and wind rustles the treetops. The men come bearing an old videotape of a show-trial style interrogation, the proceedings cast in an eerie blue pallor, the first significant switch in color palette in a film where such changes signal important tonal shifts.

The departure from this initial idyll is replicated and amplified with the following scene, a placid car ride along a futuristic highway (shot in a dreamy-looking Tokyo) that slowly segues into a hellish churn of machinery, infernal red lights filling the frame as night falls and traffic piles up. In the next shot, the farmhouse environs are now pale blue as well, like a silent movie version of night, a wan shade that adds a mournful tinge to the burning of old papers, before earth is left behind, perhaps for good.

In keeping with the portrayal of the present as a waste dump for both old memories and a looming, uncertain future forestalled by circumstance, it’s telling that the Solaris space-station is not a glimmering vision of pure, pearly progress (as in 2001, a film Tarkovsky apparently detested) but a decaying wreck, beset with scads of physical wreckage, as well as the aforementioned roaming spirits. Kris arrives to find one of the scientists has already taken his own life, while the remaining two huddle in their rooms, dealing with their own private demons. For him, the planet’s reflection of his psyche takes the form of his young wife, dead now for a decade, who reappears as a confused, helpless thrall, terrified to leave his side. It’s a vision that reduces her down to his own simplistic recollections, erasing any individual autonomy, yet forcing her to physically inhabit this blinkered reality, another instance of a damaged person struggling to survive in narrow circumstances.

Through all this, the importance of the present moment is nonetheless stressed, even as the film accentuates the impossibility of embodying such a state, the weight of time pressing hard from both sides. Yet making the attempt is also the only option available; the past is lost to us, closed-off and immutable, and the future impossible to interpret. This depiction served as an apt commentary on the Soviet Union of the early ‘70s, a moldering ruin of a once-expansive dream. It was also a perspective equally expandable to the world at large, already suffering the shuddering comedown from the quashed progressive revolutions of the late ‘60s. It’s a vision that sadly still holds true today, in a world that’s significantly more futuristic yet no further removed from the problems that plague the characters here, further progress having only heightened the sense of imminent doom.

In the end, Kris falls victim to the same toxic disillusionment as the others, unable to find a way forward through the gloom. The dacha, initially imagined as an oasis of simple harmony, is revealed as another temporary hideaway from the cruel hand of existence. It returns, this time in distorted form, in a closing scene soon revealed to be another illusion spun by the sinister planet. As in the later Stalker, where the debris from an alien appearance leaves behind a wasteland of incomprehensible, reality-altering objects combed over by desperate trash pickers, the imprint of a potential future results in a distorted form of the present further muddied by the residue of the past. An early instance of sudden rain flooding a cup of tea is later matched by an entire house saturated with water, the life-giving liquid transforming into an overwhelming force of destruction. As Solaris demonstrates, life is an ever-flowing font of possibilities and experiences, yet this flow eventually becomes a deluge, the onrush of memories and sensations making it a struggle to merely keep your head above water.