January 27, 2021
Home Features Revisit: All About My Mother

With All About My Mother, Pedro Almodóvar entered his Old Master phase, catapulting himself definitively onto the world stage and proving that he was more than just a Spanish national treasure – this film firmly situated him amongst the all-time greats. Winner of the Academy Award for Best Foreign Language film as well as a Best Director award from the Cannes Film Festival, All About My Mother is a work of effortless skill and command of technique that encapsulates and integrates all of Almodóvar’s previous proclivities, obsessions and fetishes to create a surprisingly gentle and endearingly impressionistic portrait of his mother. As the closing text proclaims, it is dedicated “to Bette Davis, Gena Rowlands, Romy Schneider – To all actresses who have played actresses. To all women who act. To men who act and become women. To all the people who want to be mothers. To my mother.”

So All About My Mother is about more than Almodóvar’s mother – I doubt if much (or any) or her actual life story is on display – it is really a statement of support for a certain type of strong, vibrant, Spanish female, whether that female happens to have been born a woman or not. It is an acknowledgment and a celebration of all the various forms of acting that women must do in their daily lives, not only in films and on stage (although certainly those, too), but in the many ways they are forced to fit themselves into certain roles in order to survive. With this film, Pedro Almodóvar combines the flair for meaningful melodrama of Douglas Sirk with a touch of the absurdity of Luis Buñuel to create a sweetly sensationalistic amalgamation that is purely his own.

The “mother” of the title is Manuela, an Argentine nurse and single mother living in Madrid as the story begins. Wonderfully played by Cecilia Roth, Manuela lives alone with her only son, 17 year old Esteban (Eloy Azorín). If Manuela is a stand-in for Almodóvar’s mother, then Esteban is Almodóvar himself, or at least the essence of how he envisions himself to have been at that age – self-possessed, artistically driven and worshipfully devoted to his mother as only a young gay man can be. After attending a performance of A Streetcar Named Desire, Esteban is fatally hit by a car while trying to obtain an autograph from his favorite actress, Huma Rojo (Marisa Paredes). Huma (the name roughly translates to “red smoke”) will become inextricably entwined with Manuela’s life as the film progresses. As is the norm in Almodóvar’s oeuvre, the plot of All About My Mother is full of such chance encounters and dramatic turns of events. Almodóvar’s world is one that is tightly knit together though the cosmic threads of coincidence and chance. 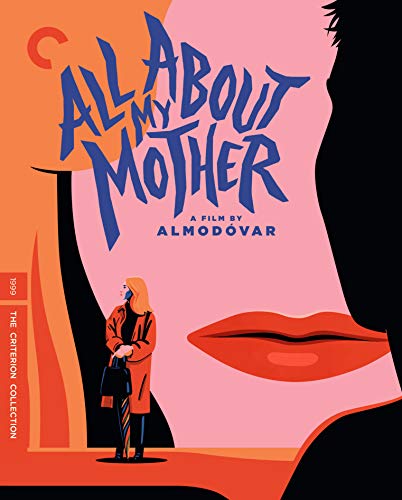 It is interesting that Almodóvar chooses to remove his fictional surrogate from the story so early. Although absent from the film, Esteban’s presence lingers. A burgeoning author, Esteban (one of many artists in this most artistic of films) has compiled a journal, excerpts of which we hear in voice-over. Fascinated with acting and performance, Esteban was intrigued to learn that his mother had been an actress before he was born. It was during an amateur production of Streetcar that she met and fell in love with his father, Stanley to her Stella. Esteban dies before he can discover more about his origins.

If Esteban is Almodóvar-as-writer, his death transforms his character into an invisible representation of the script itself. Although no longer on screen, it is as if Esteban writes the plot of what is to follow from beyond the grave. The rest of the film largely involves his mother’s quest to track down his absentee father and come to terms with the affects of his lasting legacy. Esteban’s father dominates and casts a pall over the latter part of the film, although he, too, is absent from much of it. This is one connection between the two representations of Almodóvar in the movie, another and more obvious one being their names – before becoming a transsexual called Lola, Esteban’s father was also named Esteban. Lola/Esteban is Almodóvar-as-director – his is the glue that binds the characters together through his force of will, precipitating the melodramatic tragedy that is to come.

Traveling to Barcelona in search of Lola, Manuela goes to the first place she expects to find her – a dusty field filled with transsexual prostitutes. As cars and motorcycles full of men slowly trawl in circles, Manuela realizes the danger of the situation and decides to flee. Doing so, she soon comes upon a scene of attempted rape. After helping to fend off the attack, she (and the audience) are bemused to find the victim, Agrado (meaning “agreeable”) soothing the man before sending him off to find another, more accommodating whore. This is typical of the way Almodóvar treats scenes like this – the more horrible the act, the more empathy and kindness he shows to the characters committing them. It is not that he condones rape, I don’t think, or that he has only a simplistic desire to shock. Almodóvar understands and empathizes with the monster within. He handles these scenes with a lightness of tone that can indeed be shocking, but also hilarious. For example, walking away from the whores’ pavilion, Manuela and Agrado pass a pair of topless trannies, crouched beside the road in thigh-high silver boots, delightedly playing patty-cake.

Agrado (Antonia San Juan) is one of Almodóvar’s great casting discoveries. She typifies and embodies All About My Mother’s core of female strength and energy. Returning to her apartment, perhaps the most tastefully vibrant and wonderfully colorful apartment ever shared by a pair of streetwalking transsexual prostitutes, Manuela learns that (coincidence alert!) Lola is (or rather was) Agrado’s roommate and recently absconded with the money Agrado had been saving up for another surgery. Looking for work, the pair turn to Sister Rosa, played with an earnest sense of pious sweetness by soon-to-be Almodóvar regular, Penélope Cruz. Has there ever been a more delightful screen presence than Ms. Cruz? She has never been better than in the maestro’s films, and in this early role she shines as a pregnant nun who slept with and contracted HIV from none other than Lola. Almodóvar strikes again! Synchronicities and serendipities abound.

As in most of Almodóvar’s films, the plot from here on in gets increasingly convoluted and tightly knotted. Suffice it to say that there are a number of calamitous turns of event, tearful exchanges and shocking reveals, all of which lead up to a climactic encounter with the ever-mysterious and elusive Lola (Toni Cantó). (Playing the difficult “Harry Lime” part, Cantó pulled it off with wonderful aplomb. He brought a perfect combination of power, sexuality and dangerous vulnerability to his role.) As in the films of the Coen Brothers, the plot for Almodóvar is frequently just a frame on which to hang his themes and visual style. The color scheme and production design in All About My Mother is some of the best in Almodóvar’s oeuvre. The wall paper in Manuela’s apartment, the Spanish tile in Sister Rosa’s parents’ house, the kitchen in Agrado’s, the costumes on everyone – these are some of the most strikingly eye-popping designs to hit the screen since Jean-Luc Godard’s ’60s heyday. The theme of theatricality is also skillful portrayed. Within the first five minutes of the movie, for example, we see the following displays of acting: Manuela and Esteban watch an excerpt of All About Eve, Manuela acts in an educational film that teaches doctors how to persuade the recently bereaved to donate their loved ones’ organs (a plot point recycled from Almodóvar’s The Flower of My Secret) and of course the Tennessee Williams stage play. Later on, a design element in Manuela’s apartment strongly resembles a proscenium arch. The real pleasure of the movie, above and beyond the themes and designs and the fabulous musical score is the relaxed ease with which a number of talented actresses interact on screen. All About My Mother is one of Almodóvar’s most gentle films – despite the melodrama, despite the histrionics, there is a casualness to the film that is simply a delight to behold.

To the pair of Estebans is added a third, late in the film – Sister Rosa names her son Esteban, too, after his father. If Esteban the son is Almodóvar-as-writer and Esteban the father is Almodóvar-as-director, who or what is Esteban the infant? I think perhaps the third Esteban is the film itself, a joyous bundle of light and love, product of his father and spiritual child of his mother, whom this film is, after all, all about.