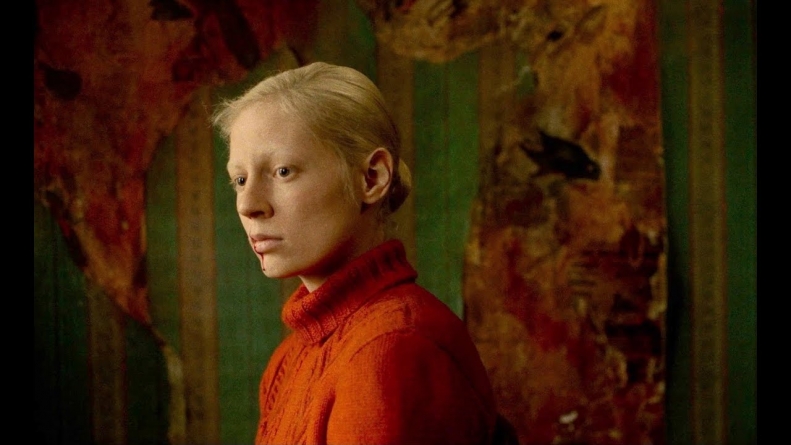 Beanpole is a crazily advanced work for such a young team of artists.

With both its talented stars making their film debut, and director Kantemir Balagov not yet 30, Beanpole is bursting with young talent. Yet these emerging artists demonstrate an impressive patience beyond their years.

The film opens slowly as we watch and listen to the pained Iya (Viktoria Miroshnichenko) breathe and gasp as she works in a hospital in post-Siege Leningrad. Beanpole continues at a haunting, lyrical pace. Leningrad itself looks broken and sad, but the lead characters, both pale and brittle, are clothed and lit in emerald green and ruby red hues, adding a bewildering fantastical element to their journey presented with an admirable assurance.

Iya is suffering from post-concussion syndrome; she fought in the war before becoming a nurse in the ransacked Russian city, and she moves about in a state that alternately seems dreamy or terrified. Her manic friend Masha (Vasilisa Perelygina) complicates Iya’s life in devastating fashion, yet she too moves slowly most of the time, with only her eyes, mouth and the occasional slap of her hand breaking this up. Masha believes that Iya owes her a life, and as a result she hatches a sort of forced-pregnancy plot that is creepy yet also serves as the launching pad for the women’s codependent, sometimes romantic relationship.

Loosely adapted from Svetlana Alexievich’s novel The Unwomanly Face of War, Beanpole pulls no punches, and starkly renders the grim reality of Russia in the immediate aftermath of war. But Iya and Masha somehow seem outside of the world they inhabit, both in their colorful presentation and in their actions and interactions, many of which seem unhinged. It’s at times horrifying because it seems so out there and so real all at once. Masha’s increasing instability, played beautifully by Perelygina, suggests insanity, but as we see more and more of Iya and Masha’s lives it becomes clear that desperation is driving her.

The production quality is outstanding, with a strict attention to realism offset by pops of lush color and haunting music (or a lack thereof), and a crew as young and vibrant as the film’s stars. Cinematographer Kseniya Sereda is only 25 while costume designer Olga Sminova and production designer Sergey Ivanov make incredible debuts. Only the composer, Evgueni Galperine, who did similarly haunting work on last year’s By the Grace of God, is a veteran.

Beanpole moves slowly but bracingly. Yet even as sad as we are for Iya and Masha, it’s hard to get inside their heads. Sometimes they are more than characters living in horrific circumstances, and instead become symbols: of the nature of war and of a city ravaged by it. Unfortunately, this makes it hard to get attached to them. They don’t need to be more uplifting or likeable, just more human. There’s also a consistent yet unresolved undercurrent of humor, an attempt to reveal the absurdity of this horror. But the director doesn’t seem to pull the trigger on this tone. Coupled with some purposefully jerky moments in the characterizations, this tonal inconsistency can make it feel like we’re missing out on a joke.

These are small things, though. As a whole, Beanpole is a crazily advanced work for such a young team of artists. Its singular vision of war admirably focuses on the relationship between two women. While women are left out of so many war films, they often fought on the frontlines, and Balagov demonstrates that war can be just as devastating for women as for men—and that that fallout can look very different.