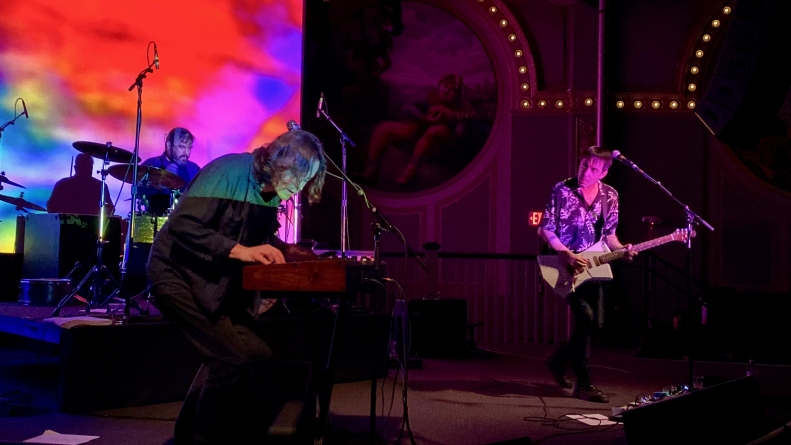 The band’s love of the Crystal Ballroom is clear in how great they always are in the space, even when there are nits to be picked.

Not only was the Crystal Ballroom the first venue Wolf Parade ever played in Portland—and in the United States at large—but it turns out that it’s the only venue the Canadian band has played within the city limits. “As far as we’re concerned, there are no other venues in Portland,” guitarist/singer Dan Boeckner said with a laugh at their most recent stop here, and it’s shockingly comforting to know that a band has played a venue enough times to be at home in a space so relatively far-flung from their actual home.

But what would it be like to see this band in a different room? This question came to mind for a variety of reasons. The most pressing one is that, as a three-piece—bassist Dante DeCaro left a year ago to live life as a civilian—the stage of the Crystal Ballroom almost swallows the band. Boeckner seemed like he was half a mile away from keyboardist/singer Spencer Krug, leading to a strange disconnect between the two vocalists. This did little to diminish the actual energy of the band, who are in persistent lockstep with each other, but the substantial empty space behind Krug somehow felt more noticeable. Luckily, they paired the show with trippy, colorful visuals, which helped provide a hearty distraction.

Largely, though, this was a trifle. In speaking about Thin Mind, Krug expressed surprise at how three people can make so much noise, and watching them actually make that noise elevates that feeling. Unlike many three-piece bands capable of impressive sound, Wolf Parade don’t even pick up different instruments to do it. Boeckner only went as far as changing guitars, while Krug stayed planted firmly at his keyboard. Even while actively watching Krug produce the bass tones lost by DeCaro’s departure, it’s easy to lose sight of where the bass is coming from, which is an impressive trick.

What’s also impressive is how fast the show felt. They got through 15 songs in about 75 minutes, with banter—quick enough that their encore break released a “Wait, that’s it?” feeling until I checked the time. This isn’t to say that it was unsatisfying, as there really are no unsatisfying Wolf Parade shows, but by the end of their main set closer “This Heart’s on Fire,” it felt like they’d somehow messed with the fabric of time. Part of this, of course, can be blamed on their sheer charisma: even with the space in between members onstage, they have a ton of chemistry, all of which feels tied together by just how much fun Boeckner always looks like he’s having. After virtually every song, he beams with joy like he’s never heard a venue full of people losing their marbles over his music before.

It also helped that their setlist was full of hits. They played the usual fare—“Grounds for Divorce,” “I’ll Believe in Anything,” you know the drill—but they also used their encore to trot out the ancient rarity “Disco Sheets,” which (excluding the show a few nights prior) hadn’t seen the light of the day since they played it twice in 2006. It felt like a moment for the diehards in the room, all of whom seemed awestruck by the song’s inclusion. The newest material also sounded great, with new songs like “Julia Take Your Man Home” and “Against the Day” feeling as at-home as “Fine Young Cannibals.” It would have been nice to get other beloved songs like “Kissing the Beehive” and “I Am a Runner and You Are My Father’s Son,” but considering the caliber of songs they did play, that almost feels unfair.

The band’s love of the Crystal Ballroom is clear in how great they always are in the space, even when there are nits to be picked. That said, it’s hard not to imagine them in a space like the Wonder Ballroom or Doug Fir Lounge, venues with stages big enough for the band to still exist, but small enough that you could feel even more immersed in their often frantic energy. Unlikely? Perhaps, but a girl can dream.