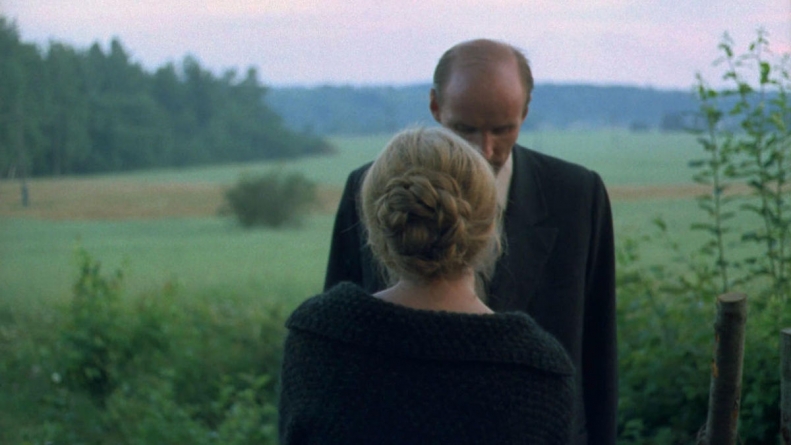 Mirror anticipates the work of Terrence Malick, who would adopt a similar approach for exploring his own interests in spirituality and humanity.

With its surreal visions and hypnotic rejection of narrative flow, Solaris had announced the true arrival of Andrei Tarkovsky’s singular form, finding abstract, intuitive expression of the spiritual questions that formed the backbone of his work. His next film, Mirror, only expanded on this form, settling onto the oblique structure, elegant camera movement and dream logic editing that would define his mature work. Its title befits the frequent uses of mirrors throughout the film, yet far from providing a simple reflection of characters, the surfaces only compound the sense that what we are seeing is unknowable and ineffable. Reflections are often distorted in the glass, a constant reminder that what we are seeing cannot be fully trusted, and that any attempt to explicate a person can only approach the truth, never truly capture it.

This subtext complicates the film’s heavy autobiographical elements, from the director’s experiences growing up in pre-war Soviet paranoia and the trauma of World War II to having his own father (Arseny Tarkovsky) play the unseen, adult protagonist as he narrates both life events and the man’s own, real-life poetry. Time is slippery in Mirror, regularly juxtaposing life in the 1930s, the war and the relative present of the 1970s. In addition to being voiced as an adult by Tarkovsky’s father, protagonist Alexei is also played as a child by Filipp Yankovsky and a young teenager by Ignat Daniltsev, and at times only the swaps between actors give an indication of what time period the film occupies at any given moment. Further complicating things is the fact that Daniltsev also plays the adult Alexei’s son, Ignat, which manages to collapse distinctions in time while also hinting at thoughts on the cycles of life and the way that the next generations inherit the sins and traumas of previous ones.

Consider the dual role that Margarita Terekhova plays as Alexei’s mother, Maria, and his wife, Natalia. In the past, we see Maria’s caring nature, a wistful look on her face as she stands over the countryside home that exudes the placid idyll of life away from the horrors affecting Russia. Natalia, however, is forever tense when dealing with her now ex-husband’s off-screen voice, the two locked in their own cold war as mutual resentment has cooled into a detente with only questions of custody to reignite their conflicts. There’s an undeniable Oedipal strain to casting Terekhova as both mother and wife, and it can charge some scenes with Maria, such as the film’s famous dream sequence in which she floats above her bed as a dove flies past, with both childlike devotion and burgeoning sexual attraction.

All of this imbues Tarkovsky’s elegantly gliding shots with as much tension as grace. The camera in Mirror frequently moves, but always just out of step with characters, either drifting away from them before they start to walk or staying in place for a few seconds after they move before giving chase, as if startled out of a reverie. The camera often settles on a stray object or natural sight, from milk dripping from the ceiling onto a still life arrangement of potatoes on a table to a sudden gust of wind that passes over the long grass around the family home to mark the departure of a passerby. That man, a doctor, is first seen in the distance as the adult Alexei reminisces about watching men approach the house as a child, knowing if a figure too far away to make out glanced in the direction of the house as they approached that it was his father, and merely a visitor who would never been seen again if not. The doctor approaches Maria, who is sitting on a flimsy fence, and their interaction is charged with a desperate eroticism, both people lonely and unmoored by the war. As the camera gently weaves around them, we can feel Maria’s longing for her absent husband settle onto this stranger, and only the fence breaking rouses both people from their increasing attraction.

For all of the blurred psychological subtext, though, there are also moments of political angst that are articulated with just enough subtlety to slip past censors. A scene set in the 1930s at the height of the Stalin-era Great Terror shows Maria running to her printing job in a state of near-hysterics, sure that she left an error in a manuscript about to go to press. The error, which turns out to not even exist, seems like nothing more than a typo, but in Maria’s frantic attempt to double-check the copy before it is distributed is some of the rampant paranoia of the Stalin era, when a simple mistake could have spelled a person’s doom. Likewise, Tarkovsky approaches WWII with an oblique sense of the tragedy that affected Russia, mixing documentary footage of troops trudging so slowly through blankets of snow that they look like they are moving in slow motion with interspersed footage of Maria and the kids drifting around the countryside aimless and scared.

With its blend of memory and association, abstract structure and tactile cinematography, Mirror anticipates the work of Terrence Malick, who would adopt a similar approach for exploring his own interests in spirituality and humanity. Indeed, the shot of Maria levitating above the bed, and all of its attendant latent desire, would echo in the moment in The Tree of Life where Jessica Chastain’s own elemental mother floats above the ground. Yet for all the transcendence of Tarkovsky’s cinema, the trauma that palpably runs through this film is rarely found in Malick outside of the personal demons that haunt To the Wonder. Late in the film, Tarkovsky finds subtle ways to express the anguish of life during the Soviet Union’s most trying era, including a scene in which he and Maria take shelter with a neighbor and he is left alone in a small room, its cozy wooden walls and glowing light suffused with a nervous anxiety that undermines the space’s comfort. And in the final shot, time fully collapses, blending the Maria we’ve seen throughout the film with her older counterpart (played by the director’s mother). In effect, the woman watches herself as the older version walks with her children as they were in adolescence. Even in this peaceful coda, though, Tarkovsky locates a pulse of mourning, tracking with the kids and old woman as they walk through a field until the camera retreats into silhouetted woods as the sun is obscured in the distance, the image gradually obscuring, then blotting out, the action as the time-shattering note of grace ends on disquietude.