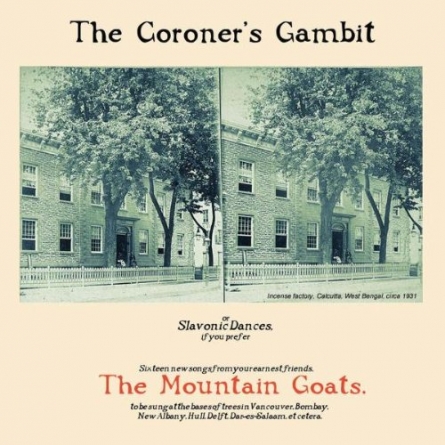 To those who can’t stomach that noise, please remember this: beneath the noise lies magical songwriting worth pushing through for.

When you spend your career recording on a Panasonic RX-FT500 boombox, there’s nowhere to go but up. Starting with his earliest tapes, John Darnielle – better known as the Mountain Goats – used the power of an acoustic guitar (and maybe a Casio, if he was feeling frisky) and that boombox to put to music the poems he’d written. If you’ve never heard anything from the earliest days of the Mountain Goats (going back as far as 1991’s Taboo VI: The Homecoming or 1994’s Hot Garden Stomp), you know that this music has its charms and its qualities, but fidelity was not one of them: if you could learn to accept the “whiny” and “nasally” qualities of Darnielle’s voice, you’re still confronted with the perpetual whirr and buzz of the medium. These songs are great, but they don’t sound great, and even devotees will tell you that Darnielle’s lo-fi period can be a little difficult (see: “Going to Cleveland” from Transmissions to Horace, which feels like a taunt).

In 1997, he released Full Force Galesburg, and while plenty of songs still had that unmistakable whirr that announces most pre–Tallahassee (2002) songs, many songs – “Down Here,” “Masher,” “Song for the Julian Calendar” – sounded downright polished, almost professionally produced; it was as though he’d mastered the Panasonic RX-FT500 and ascended to a place where he could make songs that felt inviting, without the substantial listening barriers. As far as the earliest Mountain Goats albums go, Galesburg felt like his sound was finally able to catch up with his artistic intentions.

It’s hard to know all of what consumed Darnielle in the three years that followed, but what we do know is that, less than a year after Galesburg, Rozz Williams – estranged friend (according to the album’s liner notes) of Darnielle and the founding member of the band Christian Death – hanged himself. The tragedy lead to the longest period of silence for the band – he released one 12” EP on the Olympia label Yo-Yo Records (New Asian Cinema, now a beloved classic among die-hards), but otherwise kept silent until 2000, when he released The Coroner’s Gambit.

His most haunted work to-date, Williams’ death seemed to inform the tone of the entire record, right down to the heart-wrenching letter directed to his ghost that is included in the liner notes: “I don’t imagine that anyone reads the scribblings on the backs of album jackets to them, either, so I am really only addressing a memory. To that memory I say: I thought of you now and then when I was writing these songs. I don’t suppose they’d do much for you, but I thought of you all the same.” “The Coroner’s Gambit,” “Shadow Song,” and “Bluejays and Cardinals” are each explicitly about his passing – and even outside of those songs, sorrow and fury permeate almost every song in one way or another, a stark shift away from some of the brighter, almost poppy touches of Galesburg.

The difference is immediately obvious: after a brief, sonically-degraded clip of “Haunted House Blues” by Bessie Smith on opening track “Jaipur,” Darnielle’s strum and voice comes in, but it sounds almost worse than the Taboo VI days – the song sounds like it’s somehow on fire, many notes and words straining against the limits of the boombox it was recorded on; just listen to the distortion that surrounds words like “pastry” and “low” and the line “I am the landmine buried in the sand,” the latter leading to a final verse that sounds like the tape is on the verge of collapse. Few songs are as difficult as this, but “Jaipur” feels like an endurance test for the uninitiated.

Once you’re able to break past the sound of The Coroner’s Gambit, the real beauty and heartbreak begins. Darnielle continues to bury references to Tolstoy and The Bible (which the album is fucking packed with) while misattributing Lila McCann’s “Down Came a Blackbird” to LeAnn Rimes. It’s a tribute to exactly why sites exist to annotate Darnielle’s music – these songs are labyrinths of references to long-forgotten lore and spirituality. Beneath all of those references, though, you can see Darnielle’s suffering. It’s not hard to find – listen to the way his voice cracks on the heartbreaking “Elijah,” or the palpable sorrow exuded by the Williams tribute “Shadow Song”: “This is a song for you in case I never make it through to where you are.”

Those recorded by a tiny team of people (most notably Simon Joyner) are the ones that come through the most clearly, of course, but these are the ones that seem interested in pushing the album’s sonic boundaries. Flourishes of other instruments show up occasionally, like the banjo of “We Were Patriots,” or the strings in “Baboon” and “Onions,” which make the world present here feel a lot less isolated, but only so much. “Onions” is also the closest the album comes to positivity, a soft song about the world being reborn in spring. Coroner’s Gambit is never funny or bubbly – though “Insurance Fraud #2” comes close with the laugh-out-loud line “There’s a lot of ways to make money in this world/ But I can’t recommend insurance fraud.” Sadly, the best of the bunch didn’t make the album: there exists an upbeat, “hi-fi” version of the title track, one that repurposes its acceptance of death into a goddamn pop song, complete with a spattering of trumpet.

It’s not all melancholy, though. The flipside of that sorrow is fury, and here, he’s mad as all hell – in “Baboon,” he sounds unhinged, barking lines like “AND I’VE GOT VERY LITTLE MONEY LEFT AND I’VE GOT NO SENSE/ BUT I’LL HAVE NONE OF YOUR GODDAMNED IMPUDENCE” and “Daisies on the hillside like cancer on the skin/ Pretty little yellow eyes that flutter in the wind/ I’d be grateful my children aren’t here to see this if you’d ever seen fit to give me children. Later, in the intense “Family Happiness,” he makes his “I hope you die/I hope we both die” plea of Tallahassee’s “No Children” look pitiful: “When I mouth my silent curses at you/ I can see my breath/ I hope the stars don’t even come out tonight/ I hope we both freeze to death,” he sings acidicly before moving onto a feverish shout: “I AM RIGHT HERE WHERE YOU WANT ME/ DO WHAT YOU BROUGHT ME OUT HERE FOR/ YOU CAN ARM ME TO THE TEETH/ YOU CAN’T MAKE ME GO TO WAR!” The energy of “Family Happiness” is rare even within the expansive catalog of the Mountain Goats, but it’s one that will leave you wishing it were twice as long.

Even the most neutral songs still have an uneasy feeling, and are frequently about the spaces between people. “The Alphonse Mambo” exists within the dying throes of a terrible relationship (spoiler alert: it wasn’t the end of that relationship), its narrator “waiting for the other shoe to drop in Tampa Bay,” while “Island Garden Song” sings of plans for a garden that grows high enough to shield him from the world. Elsewhere, on the tense “Horseradish Road,” he delivers one of most beloved lines: “You’ve done something awful/ I’ve done something worse,” with little but a purse loaded with $12,000 to help us to understand what happened. These songs are fascinating because even though they aren’t about the same levels of grief and loss other tracks are, they still feel deeply affected by its presence.

Following The Coroner’s Gambit, Darnielle would maintain course for just one last record: 2002’s All Hail West Texas. Those with a cursory knowledge of the band know that this was the band’s tipping point, and by the end of the same year, he’d fully abandoned the boombox in favor of 4AD’s funding and Belle & Sebastian and Mogwai’s producer Tony Doogan to release Tallahassee. It was, truly, always meant to go that way – Darnielle was never meant to toil away in boombox exile, but rather to rise above that and be given the chance to play music untouched by the mechanical whirr of the cassette. To those who can’t stomach that noise, please remember this: beneath the noise lies magical songwriting worth pushing through for.