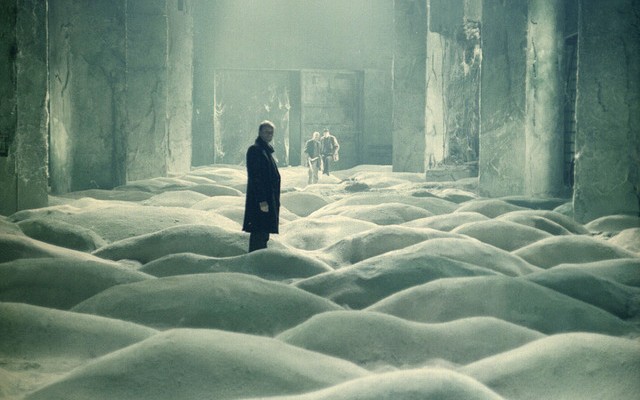 Tarkovsky’s characters aren’t pursuing the alien other, they are pursuing their innermost desires.

Today, the title of Andrei Tarkovsky’s 1979 film makes it sound like at best a midnight movie about a crazed hitchhiker hunting teens. But, like everything Tarkovsky touches, the title came about in a complicated and fascinating manner. Stalker is loosely based on the 1972 Piknik na obochine (Roadside Picnic) by Russian science fiction writers Arkady Natanovich Strugatsky and Boris Natanovich Strugatsky. For their novel, the Strugatsky Brothers coined the term “stalker” to refer to someone who smuggles possible alien artifacts out of a forbidden place called the Zone, a wacky, mysterious location where strange things happen. These strange things are said to happen because the Zone sits atop the remnants of a long-ago alien invasion.

Stalker was released in 1979, Tarkovsky’s last film made in the Soviet Union. He would soon travel to Italy and would live and work there and in other parts of Europe until his death in 1986. The subject of border crossing was obviously on Tarkovsky’s mind, which is part of what makes the film so fascinating. Alexander Kaidanovsky plays the Stalker, who agrees to take two men, the Writer (Anatoly Solonitsyn) and the Scientist (Nikolai Grinko) into the Zone. The Zone is filled with traps and puzzles, and only the experienced Stalker can lead these two men to their goal, a mythical bunker said to contain a room in which dreams come true. However, as they get closer to their goal, the men begin to realize that the Zone is using their own minds against them.

The film is set in the distant future, and Tarkovsky’s vision of a wet, grimy post-apocalyptic future is still so unique and singular 40 years after his film’s release. The thing that really differentiates the film, and much of Tarkovsky’s oeuvre, is its stillness. His long takes, particularly those of the “alien” landscape of the Zone, are grimly beautiful and absolutely haunting. These are occasionally punctuated with quick bursts of images, and the juxtaposition is both exhilarating and cooly manipulative because of their shocking presentation. All of this is enabled by Tarkovsky’s patience, and though Stalker is nearly three hours long, its length is earned and vital.

The director’s quest to realize this vision was notoriously strenuous, as he forced cast and crew to work in a number of dangerous and disgusting locales, including an abandoned paper mill where they stood knee-deep in discarded oil for hours on end. The stress of the shoot is perhaps best exemplified by the film’s revolving cast of cinematographers. The shoot began Estonia with Tarkovsky’s longtime collaborator Georgi Rerberg behind the camera, but according to legend Tarkovsky was so insanely exacting and picky that filming shut down and Rerberg was dismissed, Tarkovsky brought in new cinematographer Leonid Kalashnikov and attempted to reshoot Rerberg’s work, but that footage didn’t meet the director’s exacting standards either. Stalker was then entirely reshot using another cameraman, Alexander Knyazhinsky, who was responsible for most of the final film save for a stunning storm sequence by Rerberg that made it into the final cut.

Watching Stalker today, particularly in its crisp Criterion restoration, it’s impossible not to see the influence the film has had on subsequent artists from Jeff VanderMeer and Alex Garland (Annihilation) to Jonathan Blow (the video game The Witness) to Michael Crichton’s Sphere. Some even claim that, with this film, Tarkovsky predicted the Chernobyl disaster. But Tarkovsky’s greater legacy is the way he takes science fiction and ties it to the human. Science fiction is so often about alterity, about something entirely different from what we know. What Tarkovsky does in Stalker, following on his work in films like Solaris, is to use science fiction as a way to explore the human heart and mind. His characters aren’t pursuing the alien other, they are pursuing their innermost desires.