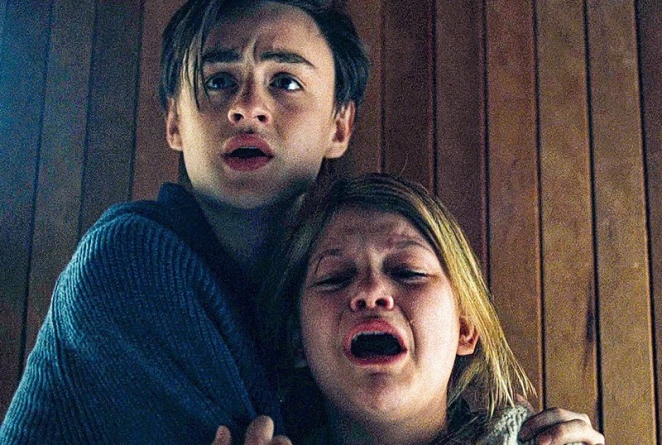 Occasionally so sad that to linger too long in it would be soul-destroying.

Audiences have had to wait six years for aunt/nephew team Veronika Franz and Severin Fiala to follow up their breakout film, 2014’s Austrian horrorGoodnight Mommy, and the wait was worth it. The codirectors (who also wrote alongside Sergio Casci) have made a colder and more claustrophobic film in The Lodge, though it maintains much of Goodnight Mommy’s trademark trickiness. The film commits to a few jump scares and some effective twists, but the overall approach here is one of psychological horror, and the ending, in particular, will linger in the minds of viewers, just as Goodnight Mommy’s has.

Like the directors’ previous film, The Lodge revolves around a woman and two children. Here, the woman is Grace (Riley Keough, granddaughter of Elvis) and the children are her boyfriend Richard’s children, Mia (Lia McHugh) and Aiden (Jaeden Martell). Journalist Richard (played by Richard Armitage), Grace and the kids are spending Christmas in an isolated lodge when Richard is called back to the city for an assignment. He leaves his children in Grace’s care for a couple of days, but as he leaves, the snow begins to pile up outside.

This would probably be a pretty fun holiday adventure for your typical modern family, but here in The Lodge, Mia and Aiden aren’t that fond of Grace, first because she’s broken up their dad and their mom, Laura (Alicia Silverstone), who doesn’t take the news of Richard and Grace’s intent to marry very well, and second, because Grace is the sole survivor of a suicide cult. It’s all a lot to take for two youngsters, though Grace tries to bond with them, particularly once their father has left them all alone.

Between the snow, the premise and the violence, The Lodge is a pretty grim affair, and it becomes darker and more intense as it rolls towards its conclusion. The performances, however, are nimble, particularly Keough as the relatable but also unreliable Grace, who Franz and Fiala are careful to not allow us to trust. They are also aware of the unfair strain Richard’s absence has put on Grace, and it is nice to see the absent father given some blame to shoulder rather than simply making his moves a plot device. Though, as plot devices go, The Lodge’s trapped-in-the-snow setup is wonderfully effective despite being such a classic approach to the genre. The lodge feels more and more isolated as the film progresses, which allows us to feel Grace’s isolation. Even as Keough conveys this isolation, though, she also underplays much of the action, which is incredibly effective. It is reminiscent of Elizabeth Olsen’s quieter moments in 2011 cult classic (pun intended) Martha Marcy May Marlene, and it makes Grace a character that is consistently challenging, even puzzling (in a good way) at times.

Though there are slow-paced bits to build tension, The Lodge moves along at a fair clip, particularly considering the genre and the relatively small cast, and this is welcome as the film is occasionally so sad that to linger too long in it would be soul-destroying. This is another of the directing team’s talents from Goodnight Mommy that they’ve brought along to their English-language debut; they are very effective at dishing out devastation of just the right size and length, so that you feel the pain without it ruining the entire experience.