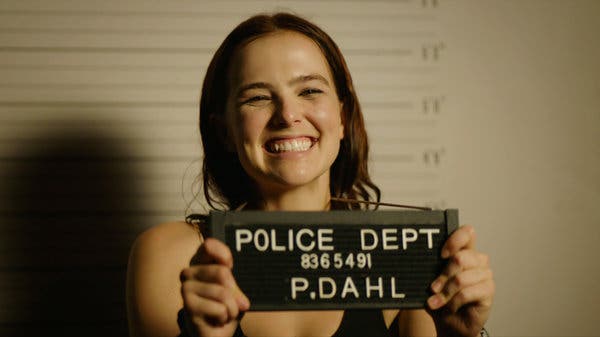 A vicious satire that stresses how someone, with no access to the social ladder, opt to turn on people like her, the savvy poor bilking their helpless peers so that they themselves might survive.

Tanya Wexler’s Buffaloed stands out among the recent crop of self-aware, Scorsesean comedies about late capitalism for a few reasons. First, the activities of its protagonist are, in comparison to gangster theft or Wall Street malfeasance, entirely legal, merely an exploitation of a system in which debt collection is given free rein to violate the privacy and well-being of people to enact usurous and medieval punishment of the poor. Second, the protagonist is, unlike the bullish, masculine leads of other capitalist takedowns, a woman. We meet Peg Dahl (Zoey Deutch) as a young girl growing up in a poor, single-parent family where necessary frugality breeds both a prodigal show of accounting acumen and a hustler’s fast-talking in the child. Attempting to save up cash to get into an Ivy League school and get out of her dead-end Buffalo environment, a teen Peg does everything from selling loose cigarettes to classmates to counterfeiting Bills tickets.

The latter, naturally, comes back to bite the bright, reckless woman, landing her a felony charge and a prison stint that destroys her employability and wipes out a lifetime of savings to pay for court costs. Drowning and trapped in the home she wanted so badly to flee, Peg finds a possible life raft when a collection agent calls her to settle up her immense legal debt. When the agent attempts to negotiate with her to pay off her debt with a fraction of the total cost, she realizes the job is effectively sales and heads to the business, which is locally operated, to offer her services as a hustler in exchange for wiping away her own debt.

Deutch strikes an impressive balance as Peg, folding the bouncy energy of an indie comedy protagonist into the brutish ruthlessness of class satire. Most of Peg’s salesmanship, whether hocking fake tickets outside a football stadium or convincing debtors to raid their 401(k)s and student loans to settle up with her, is predicated on a charm offensive that disarms prospective clients before she hits them with a brutal hard sell. She’s the living embodiment of the urban legend of people hiding razor blades in Halloween candy, and her ability to relate to debtors before threatening them with the full range of heinous punishments afforded to the debt industry makes her grotesquely effective. Within the first month, she’s the most successful person at the company, with her name at the top of a sales board that only emphasizes the extent to which railroading struggling people is a game among her bullpen.

This is vicious satire that stresses how someone like Peg can, with no access to the social ladder, opt to turn on people like her, the savvy poor bilking their helpless peers so that they themselves might survive. We even see how Peg’s deluded self-justification induces outright disgust from her loved ones, including her mother (Judy Greer) who had to watch her husband die of despair over his debt, and her boyfriend, Graham (Jermaine Fowler), a prosecutor whose own family history of being ruined by debt makes him a crusader against collectors. At the film’s best, it forces Peg to consider her complicity in a system that exists to exploit people like her and to contend with her defensive reactions to being called out for the harm she wreaks.

Buffaloed loses the plot, however, when it gives Peg an adversarial figure in the form of Wizz (Jai Courtney), the misogynistic and violent boss of the collection agency where she works. The film sidelines its most effective commentary, that of debt collections ruining people’s lives in completely legal fashion, by showing him committing crimes to defraud people. Wizz’s brutality leads Peg to strike out on her own with an agency populated by other outcasts: phone sex operators, immigrants, Bible salesmen and the like. This could have been the ultimate joke, a parody of lean-in empowerment politics. Instead, it feels like an endorsement of that view, portraying Peg’s team as something closer to a genuine coalition aligned against the overwhelmingly white and male world of debt collection that seeks to put them out of business. All of the careful buildup of the first half is lost to an absurd underdog story about Peg overcoming her enemy with pluck.

It also doesn’t help that the film’s satirical elements are regularly crowded out by twee jokes about small-town life that feel like rejected “Parks & Recreation” lines. Much of Buffaloed consists of broad gags about its city’s residents, who all speak with exaggerated accents and are so fiercely defensive about their town and its minor claim to fame that a judge will start a fistfight in court with an attorney over the best place to get chicken wings. The moral conflict that underpins Peg’s occupation gets almost entirely displaced through the filter of her relationship with Graham and whether her work will drive him away rather than eat her soul. It is refreshing to see a film about the locked social circles and internecine conflicts of the class war and late capitalism centered on a relatively likable woman instead of a repellent man, but Buffaloed undercuts this by treating Peg as more of a romcom figure than a corrupted figure who is, in her rampant success as a collector, arguably a far more harmful figure than Wizz, who is far less competent at settling debt. By making Wizz the embodiment of an evil industry, the film inadvertently sanitizes the system that birthed it, allowing Peg to come away as a sympathetic hero of her own story rather than the villain of those she swindles.