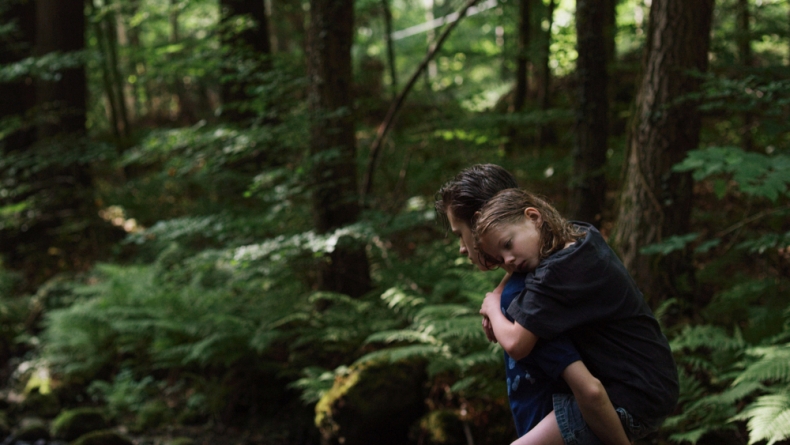 I Was at Home, But is a collage of observations rather than a cohesive collection of scenes.

I Was at Home, But Jeff Heinzl

I Was at Home, But is, on the one hand, a film with a lot going on. It includes at least four different strands: a frame narrative about the friendship between a dog and a donkey, an examination of a romantic relationship between lovers Lars (Franz Rogowski) and Claudia (Lilith Stangenberg), a classroom performance of Hamlet involving middle school students and a character study of middle-aged mother and college professor Astrid (Maren Eggert). It’s this final strand that’s at its center, but the others interrupt it frequently and without warning. The movie places the work of organizing these numerous narrative offshoots squarely on the shoulders of viewers. How do these parts connect to and comment on each other?

On the other hand, I Was at Home, But is a film where hardly anything happens at all. Its promotional materials describe a plot about the recent return of a runaway child, but it relegates this incident to a handful of impressionistic early shots and refers to the fallout only vaguely as it proceeds. It consists mainly of unsensational glimpses: a snatch of conversation or a hospital visit here, a trip to a swimming pool or a failed attempt to purchase a bicycle there. The word “slow” comes to mind, but the more accurate adjective is “still,” since neither the characters nor the camera move very much at all. At certain points, this is so exaggerated that it’s a little like strolling down Barcelona’s La Rambla to scrutinize the living statues. It’s only the subtle rise and fall of their breathing or the troubled twitching of their muscles that indicates these figures aren’t made of stone.

One’s enjoyment of this work of art, then, will depend largely on one’s interest in the act of watching closely over time. This aligns the film with a contemporary brand of art cinema filmmaking that takes its time in going nowhere (and everywhere!). Think Pedro Costa (In Vanda’s Room), Tsai Ming-liang (Stray Dogs) or Albert Serra (The Death of Louis XIV). The director of I Was at Home, But, Angela Schanelec (who won the Best Director Silver Bear for the film at the 2019 Berlin International Film Festival), connects it more readily to classical art cinema figures, especially Robert Bresson.

There’s certainly something to this Bresson reference, especially in the movie’s love for ass (Balthazar!) and its purposely wooden take on Hamlet. While it’s even less sensational than something like Pickpocket or Diary of a Country Priest, one of its great pleasures is its careful construction of a world that feels all the more real for its clear distance from reality. Teachers duel with fake swords during a faculty meeting whose topic remains unclear, a crowned child poses as a grocery store worker and those kids perform Shakespeare with unbelievable accuracy. Conversations, too, seem more direct than in real life. Lars and Claudia discuss the possibility of having a child together, and this leads to an emotional and philosophical dialogue about loneliness and life mission. The film’s midway point—and perhaps its heart—is an honest exchange between Astrid and a colleague that mostly involves Astrid verbalizing her beliefs about acting and truth while the colleague calmly listens.

Such moments thought-provokingly gesture towards the arbitrariness of daily life, especially as this connects to matters of power and governance. By using obvious fiction to highlight, for example, the inane and ridiculous nature of a faculty meeting, it encourages viewers to examine their respective positions within systems of power from a different perspective, to discover these systems’ inherent absurdities. I Was at Home, But only feels unreal when examined through tired, unexpecting eyes.

Because the characters are exhausted like the rest of us, they can’t see the preposterousness of their surroundings, either. This leads to a succession of transactions that are equal parts uneasy and hilarious, as in one scene where Astrid’s children interrupt her angry dishwashing by embracing her insistently or another in which she furiously tries to return a bicycle she purchased to a seller who relies on an electrolarynx to speak. These scenes reveal messy collisions between individuals of various social classes and ages, as well as between the clashing systems that determine each person’s suppositions and in-the-moment responses.

I Was at Home, But provokes a million different kinds of thinking. This is a film about what it means to act and interact—not just with other humans but also with settings, works of art and animals. Its gorgeous cinematography, which tends to reveal characters from a distance, allows us to see individuals breathing in the particulars of a given space: an indoor pool nestled coldly in front of enormous windows, a wooden barn at dusk, a shallow stream that endlessly flows into the distance. There’s a Michael Haneke-esque quality to these shots, but they’re altogether free of cruelty and “gotcha” moments. Instead, Schanelec reveals what she calls the “correct distance” or “decisive distance” in each of her shots. This language highlights intuition over calculation and emphasizes a mysterious relationship with the world over a sadistic one. The film unfolds the way it does to investigate its own content rather than assert that content as an argument.

In this way, I Was at Home, But is a collage of observations rather than a cohesive collection of scenes. There’s enough narrative here to get viewers thinking about causes and about effects but not enough to fully reveal what those causes and effects are. Our knowledge of these characters is incomplete, and the movie reveals information about them—such as the fact that Astrid’s husband recently passed away—in tiny, barely noticeable pieces. Instead, what we have more than anything are images, as empty or as full as one’s investment in their contents. This makes the film’s greatness relative, and, arguably, it doesn’t do enough work to get viewers to really invest. Frustratingly, it doesn’t ever clarify what it wants to happen to these characters (or what it wants us to want for them).

But while this approach is burdensome, it also offers us a considerable amount of freedom, through which we can shape its contents according to our strangest whims and desires. When the movie closes with the image of a donkey that turns its head to look right at us, for example, it’s both ridiculous and just right to imagine that it’s all taken place in the mind of this mammal, quiet and curious as can be.