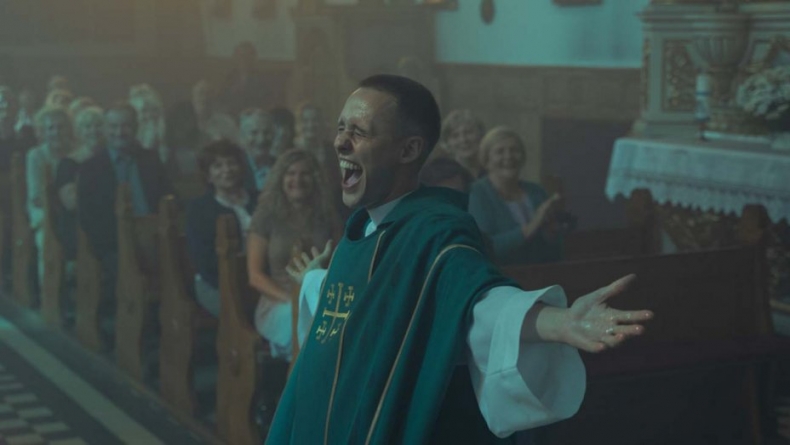 The power of Corpus Christi lies in the tension between past mistakes and present circumstances as a young man tries to leave behind a criminal history for a spiritual life.

Who among us hasn’t, at one time, felt like an impostor, about to be busted for occupying a role we shouldn’t be in? The power of the enchanting Polish film Corpus Christi lies in the tension between past mistakes and present circumstances as a young man tries to leave behind a criminal history for a spiritual life. The better he plays the role of a gifted priest, the more he arouses suspicions that he doesn’t really belong where he is.

Daniel (Bartosz Bielenia) is a young man in a juvenile detention facility who is drawn to the priesthood. We see him participating in gang violence along with fellow convicts, but he also serves as a wide-eyed and sweet-voiced acolyte to the facility’s priest (Lukasz Simlat), who seems to see potential for Daniel’s redemption. Alas, Daniel’s violent past will prevent him from ever being ordained himself, but the priest assures him that there are many other ways to live a good life.

Daniel, however, seems to feel a calling. Upon his release, he reports to a work assignment at a sawmill, only to be drawn to the sight of a church spire in a town across the valley. With a priest’s tunic and collar as a disguise, he manages to ingratiate himself with the ailing parish priest (Zdzislaw Wardejn). Daniel’s deception initially involves only lies of omission, until the moment when the priest asks which seminary Daniel attended in Warsaw. His lie in response seems to register in the priest’s eyes, but Daniel’s earnestness convinces him to give the young man a chance.

Bielenia’s nuanced performance captures Daniel’s yearning for acceptance as well as his unease that the deception can’t go on forever. He’s a man caught between two worlds which both feel like home to him. In the church, he’s soft-spoken and dignified in his layered vestments, improvising simple and poetic homilies that make the parishioners’ eyes shine with admiration. In his downtime, he cranks electronic music on his smartphone while smoking cigarettes and busting dance moves in his tracksuit like any bro at the club. His youthful and down-to-earth persona enchants some of the townspeople, while others are wary of his subversion of tradition and decorum.

Other fish-out-of-water stories tend to verge into the comical, but the mood in Corpus Christisticks to the somber end of the spectrum, heightened by long, contemplative shots of quiet village streets and dim rooms adorned only with crucifixes. Scenes unfold at a languid pace that reflects the setting and intensifies the suspense—you know that a breaking point is coming, but you don’t know how or when. Daniel, always watchful with a frosty blue stare, seems to know that he’s going to get caught, but in the meantime he plays his role with an earnestness and inspiration that seems to elude other priests.

Directed by Jan Komasa from a script by Mateusz Pacewicz, Corpus Christi (nominated for an Academy Award this year for International Feature) presents an image of a priest as an inspired and charismatic figure, childlike, who helps his flock find grace through acts of forgiveness and redemption. His example helps the townspeople deal with a local tragedy by repairing fractured relationships. This approach draws the ire of entrenched institutions who are suspicious of his motives, and of his past. “You might have power,” Daniel tells the mayor, “but I’m the one who’s right.” The mayor, an imposing businessman who’s onto Daniel’s deception, twists that notion on its head: “You might be right,” he says with the flick of a cigarette, “but I’m the one who has power.”

It’s a clever bit of dialogue, and it sums up Daniel’s situation, torn between the worldly and the spiritual. As elements from his past begin to catch up with him, he knows his time is short. His climactic homily to his flock eloquently captures the spirit of the film’s title without uttering a word. The story’s coda suggests that Daniel might be living in a closed loop that he will never be able to break out of. If you impersonate a Christ-like figure, the film suggests, you might end up as bloodied as the man on the crucifix.

A.C. Koch lives in Denver where he teaches linguistics, writes fiction, and fronts a sharp-dressed powerpop trio, Firstimers. You can find him on Twitter @henry_iblis and @firstimers3, and he blogs about books, film, and the long slog of publishing rejections (with a sprinkling of acceptances) at invisiblepony.blogspot.com.