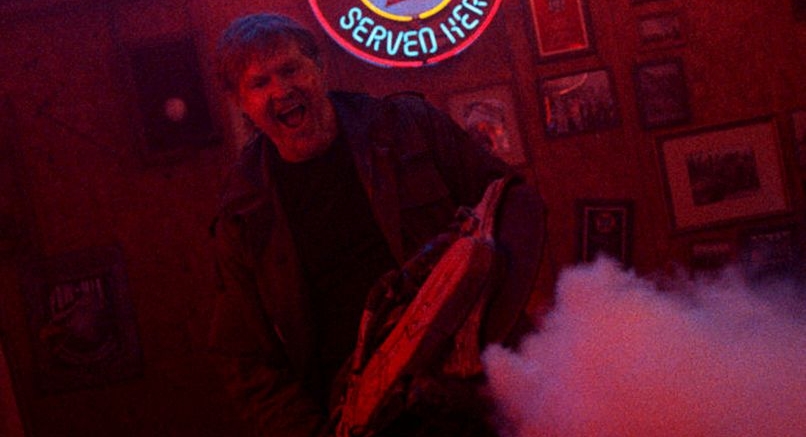 Fast-paced and full of winks and nods, VFW is an unexpected treat.

Fast-paced and full of winks and nods, Joe Begos’ VFW is an unexpected treat. The latest in a string of quality releases from the genre-specific RLJE Films (which recently released the well-received Nicolas Cage starrers Mandy and Color Out of Space, among others), VFW distinguishes itself because of how game its actors are and how smart Begos and co-writers Max Brallier and Matthew McArdle are when deploying references and homage.

The aforementioned actors include veterans Stephen Lang, William Sadler, David Patrick Kelly, Martin Kove and Fred Williamson, who all play a different kind of veteran here. The group of them play older men who gather at their local VFW outpost to drink and shoot the shit. An appearance by George Wendt at the bar establishes that this really is the place where these guys all know each other’s’ names, and the outpost serves as a social spot but also a shrine to the various wars they fought in, from Vietnam to Korea to more recent.

When drug-dealing bad guys descend on this special place to chase down a young lady named Lizard (Sierra McCormick), our veterans take up arms to protect her and their favorite spot. If this sounds a bit like Assault on Precinct 13, it should, as the tracking shots, extreme violence and synthesizer-heavy soundtrack clearly refer to John Carpenter’s 1976 thriller. In fact, a lot of Carpenter’s oeuvre is referenced in one way or another here, and it fits perfectly, as no other filmmaker has so effectively shown how jarring the intrusion of horror into everyday life can be. Another important homage is the inclusion of Williamson, who starred in a number of blaxploitation-era films and is still acting and moving like a much younger man even though he is now in his eighties. VFW shares DNA with blaxploitation films in that it balances weighty themes with irreverent action.

What starts out as a semi-realistic brawl between old dudes and criminals quickly escalates into something crazier and bloodier. Though Begos often emphasizes the horror elements, VFW isn’t terrifying. Rather, it is consistently exhilarating, funny and even thought-provoking. The director keeps things moving so swiftly that there is rarely time to catch a breath, but when things do slow down even for a moment, there is always something grosser waiting just around the next corner.

The cast is all very solid, particularly Williamson and Lang (of Avatar fame), who is 67 but moves like a man half his age. All of the older actors sell their characters’ skills despite their advanced years, and the humor that arises from their age certainly serves its purpose but isn’t overplayed. While films like the Taken series basically ignored the advanced age of its stars, and others, like Bad Grandpa, make fun of them to offensive levels, VFW has found a way to laugh along with its stars and to use their ages to come up with more interesting and unique set-pieces than you might expect for a small film like this.

VFW is much better than it has any right to be. It feels decidedly old-school in both its presentation and its singleness-of-purpose. Though it does address some important themes, the film is funny, thrilling, a little bit scary, and it does all of this without being too gimmicky.