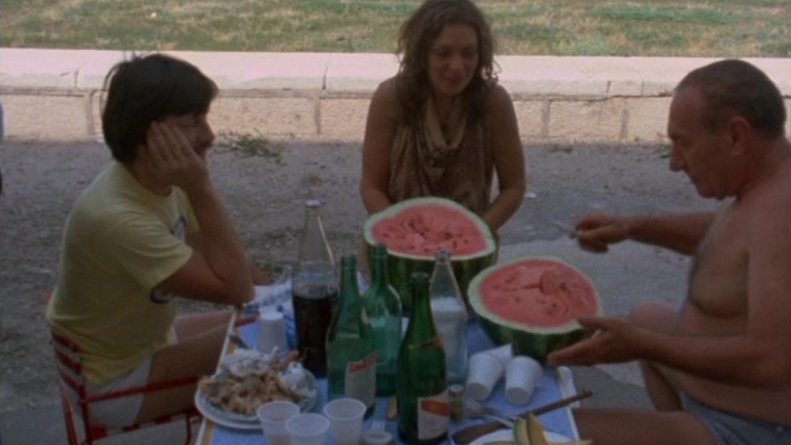 Voyage in Time is often described as Tarkovsky’s only non-fiction work, a technically accurate classification that also ignores the film’s actual presentation.

Voyage in Time is often described as Andrei Tarkovsky’s only non-fiction work, a technically accurate classification that also ignores the film’s actual presentation, which doesn’t always fit so neatly into this one category. In keeping with his resolutely boundary-breaking style, what often plays as straight documentary at other times seems to verge into staged (or restaged) autofiction, the massaging and interpreting of events that may have actually happened in some form, a quality borne out by the coordinated camera movements, multiple perspectives and other stylized flourishes. It’s this playful approach, which colors an otherwise straightforward travelogue with added mystery and formal interest, that prevents the film from feeling like a glorified DVD extra, while also challenging the prevailing notion that all of the director’s features must deliver some monumental statement of intent.

This doesn’t change the fact that the movie is still exceedingly slim and relatively off-the-cuff, a fact that really doesn’t square with the rest of Tarkovsky’s oeuvre, a neat septet in which nearly every effort stands as some sort of stylistic or narrative coup. Voyage in Time doesn’t stack up to any of these major achievements, but its low-stakes, intimate view on the creative process can be beguiling in itself. At times, it seems to point to where his career might have gone if he had lived beyond his final two features, which premiered in quick succession in the three-year window between this film and his tragic death from cancer in 1986.

Voyage in Time concerns the pre-production work for Nostalghia, documenting the Russian auteur’s visit with his co-writer (and co-director here) Tonino Guerra at the author’s house in Rome. The two chat in Italian, Tarkovksy decked out in a funky full-denim outfit, before taking a tour of the surrounding area to scout for locations, returning sporadically to Guerra’s house to hash out ideas and concepts. That’s pretty much it, a skeleton of a movie hung over the elevated, philosophizing banter of two contemplative intellectuals, feeling each other out in advance of a serious collaboration. The result is closer to the cerebral, scantly-plotted talk-fests of Nanni Moretti than anything else Tarkovsky made, with a light touch that’s entrancing, if not quite as challenging as usual.

It’s tight focus and limited aspirations are also very modern, in some sense, of a piece with the kinds of unclassifiable experiments made much easier to produce by the rise of digital, movies in the vein perfected by Korean master Hong Sang-soo. Voyage in Time even features an addled, direction-less director, scenes of communal drinking and knowingly awkward, quavery slow-zooms, three further checks on the Hong scorecard. Yet beyond these textural qualities, Voyage in Time works most fully as a faint echo for Nostalghia, with which it remains inextricably connected.

As with much of Tarkovsky’s oeuvre, Nostalghia scans as an intensely personal work, one which reflects it’s director’s status as an ennui-stricken seeker struggling to find meaning in a corrupt world. Voyage in Time lays the groundwork for this psychic struggle, centering the creator as he readies himself for the process of porting his dreams and doubts onto the screen. He discusses his recent efforts to spend more time at the country home he recently purchased, and the work commitments and anxiety that prevent him from fully embracing its pastoral peace. He expresses the fear that certain locations are too beautiful for the story he’s trying to tell, revealing the fraught process of applying aesthetic values to one’s own experiences, which he further lays bare by documenting that process as well.

A filmed sketch about its own making, Voyage in Time doubles as a sly work of self-critique, as well as a meditation on the mechanism of creation in general. This all seems fitting, since Nostalghia ended up as one of the landmarks of a different modern genre, the deracinated, high-toned Euro co-production drama, to which Guerra contributed even-more significantly as a writer. Such movies, in which serious actors of various ethnicities coalesce within grand statements of intranational ennui, tellingly tend to make use of familiar geography, exploiting these locations as reflective surfaces for the story’s emotional undercurrents. Here that approach is itself mirrored once more, in a film where location stands as yet another reflection of mental space, one of many pressing concerns looming just outside the frame.