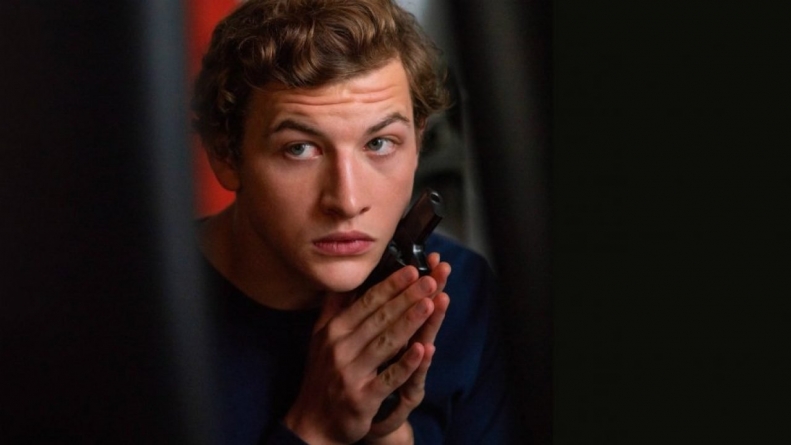 The Night Clerk has nothing to offer.

Michael Cristofer’s The Night Clerk isn’t just a bad movie; it’s three half-hearted stories smashed into one poorly executed 90-minute narrative. It’s romantic tale of a man finding love; it’s a crime procedural about a murder, a thriller without thrills; finally, it’s a coming-of-age story for a young man dealing with Asperger’s. Ultimately, the movie doesn’t succeed at any of these; the end product is a flat, tonally-inconsistent character study with gaping plot holes and one of the worst record-scratch, oh-shit-it-is-time-to-wrap-this-up climaxes in recent screen history.

At the center of The Night Clerk is Bart Bromley (Tye Sheridan), a 23-year-old man with Asperger’s who works the midnight shift at a local hotel. He is also a prolific voyeur who has stashed hidden cameras in a room that he assigns to the attractive women who check in during his shift. In his mom’s basement, he studies the tapes and watches live video. One fateful night, he’s watching the live feed when he sees a woman about to be murdered; he rushes to the hotel to intervene, but he’s too late, and the becomes the prime suspect.

So far, this makes sense, and even has the potential for something Hitchcockian. But the film collapses in the wake of the murder. The police officer assigned to the case seems to have no interest in actually solving it and instead makes fun of Bart for being a virgin. Meanwhile, Asperger’s becomes a plot crutch upon which all sorts of silly and irrational—but plot-convenient—behavior can be hinged. The Night Clerk does not investigate Asperger’s any more than you might get from its Wikipedia entry. The condition is there for narrative convenience.

Bart hides his tapes of the murder, as he is understandably worried about getting into trouble for illicitly spying on hotel patrons. But this makes him act suspiciously, making him the only likely suspect—at least, that’s what one presumes, since the investigation is never developed. Bart is simply transferred to another hotel in the same town—setting is essentially a shrug—where he meets Andrea (Ana de Armas).

De Armas is the only worthwhile thing here. She is magnetic, seductive and obviously too good for the material. Her Andrea becomes Bart’s love interest. She is understanding of his condition because her brother also had Asperger’s, so she is friendly towards Bart. But she is also romantically involved–maybe with the man who murdered the other woman.

Here is where the weight of all the plot breaks The Night Clerk. The filmmakers want us to care deeply about Bart, and Andrea, and the murder investigation, and the love story between Bart and Andrea, and the cop who sucks at his job and Andrea’s relationship with the killer. But Cristofer doesn’t pay any attention to setting or character motivation or any details at all. The cop is the cop, Bart has Asperger’s, Andrea is smoking hot with a cool accent and the murderer is a violent guy with a bird tattoo who apparently has sex with out-of-town women in random chain hotels all over town every night and he also happened to shoot one of them for unknown reasons and with little provocation.

Eventually, for reasons never made clear, Bart fakes a suicide to lure the cops to his basement recording set-up, and an explanatory note. The bird-tattoo guy is arrested immediately after the tapes are discovered, and Bart tries to be a more sociable guy, having got off scot-free for his own criminal activity. All this takes place in less than three minutes of screen time in a climax more inexplicable and rushed than the nonsensical council to decide the fate of Westeros that wrapped up “Game of Thrones.”

Aside from de Armas, who will hopefully graduate to adult-level movie material that allows her to be more than winking eye-candy (she is the next Bond girl), The Night Clerk has nothing to offer.