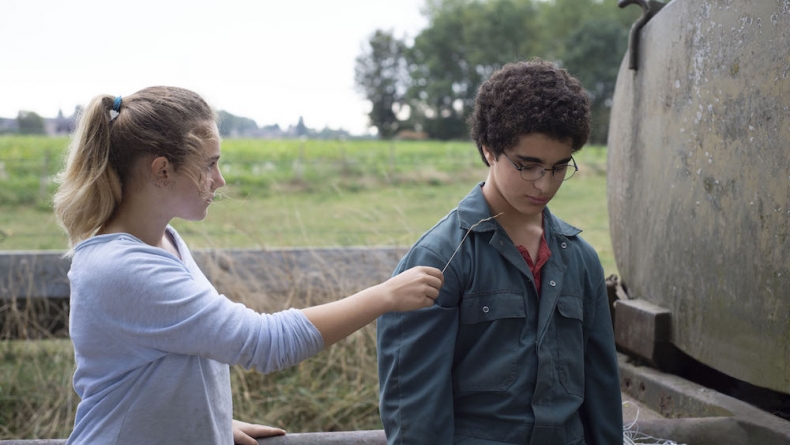 The Dardenne brothers’ Young Ahmed wastes little time in establishing the zealotry and obstinance of its young protagonist (Idir Ben Addi). We meet Ahmed studying mathematics and being helped in exam prep by his teacher, Inès (Myriem Ahkeddiou). The teacher’s patience and affability is met only with cold hostility from the teenager, who keeps agitating over text messages and finally excuses himself to head to his mosque. The teacher stops him, less for bolting from class than to ask that he at least acknowledge her, noting that he still refuses to shake her hand. The boy’s nervous, resentful energy around the woman says far more than his terse evasions of her questions and vague allusions to the reactionary nature of his imam. Before the boy has had a chance to do anything, one gets from him the feeling that he has become radicalized by his faith, so much so that he cannot even stand to be in a class with other Muslim kids he deems insufficiently ideological.

Underneath their neorealist naturalism, the Dardennes have always had a streak of social-issue direct address in the vein of Stanley Kramer, and that blend of the quietly observational and bluntly articulated abounds in the film. At church, Ahmed openly discusses his hatred of the teacher with his imam, Youssouf (Othmane Moumen), a zealous cleric who preaches a coming jihad and denounces Inès, herself a Muslim, as an infidel. Ahmed’s zealotry understandably makes his stridency unvarnished and brutal, but as he condemns his teacher for wishing to instruct in modern Arabic over that found in the Qur’an and castigates her for dating a Jewish man, his castigations feel too much like stating his subconscious fears and loathing aloud.

As blunt as Ahmed can be, though, Ben Addi filters such pronouncements and rage through a complicating prism of adolescent awkwardness and self-consciousness. The Dardennes have an unprecedented knack for consistently getting the best from young actors, and Ben Addi grounds Ahmed’s ferocity in quotidian details that hint at the subtler truths of radicalization. Ahmed never seems to make eye contact with anyone, especially women, whose attention sparks in him darting glances everywhere but the person speaking to him in a show of pious purity and teenage confusion. Even at his most ferocious and confrontational, Ahmed mumbles and swallows his words, afraid of being the center of attention.

Unfortunately, the complexity of Ben Addi’s performance is not reflected in the characters arrayed against Ahmed’s myopic worldview. The boy lashes out at everything, yet the racial and social tensions currently weighing over France and its integration of a growing Muslim population are nowhere to be found in a film where seemingly everyone around Ahmed is an unfailingly kind, empathetic figure. He certainly doesn’t get his ideology from his home life; his mother (Claire Bodson) does not wear a hijab and drinks, and she viciously castigates him for falling under Youssouf’s “brainwashing.” Inès is herself Arabic and Muslim and wishes to expand her students’ knowledge of their Arabic heritage rather than suppress it to integrate into white, Western society, yet Ahmed is still driven to such rage that he attempts to murder the woman for her sins. Placed into juvenile detention, Ahmed finds only support from those assigned to help rehabilitate him, including a caseworker (Olivier Bonnaud) who wants so badly to show the kid how kind society can be that he offers to let the boy stay and work on his family farm rather than be confined to a cell. The lack of hostility directed at Ahmed prevents any one source of derision or humiliation from being a motivating factor in Ahmed’s radicalization, but it also makes him seem like a complete aberration, a Don Quixote figure tilting against windmills in a just, equal and welcoming France that is not at all reflected by reality.

As such, Young Ahmed’s moral quandaries feel half-formed and slanted, skewing its empathetic portrayal with a limited premise. Furthermore, the film regularly falls back on the simplest explanations of male sexual panic and anxiety. Several times, Ahmed’s discomfort around women causes him to shut down, particularly his interactions with the caseworker’s teen daughter, Louise (Victoria Bluck), whose own adolescent curiosity opens a door to redemption that Ahmed is scared to enter. Only the finale, which turns into a nearly silent thriller, culminating in a shocking moment that abruptly forces confrontation with Ahmed’s single-minded fury, captures the poetic directness that the Dardennes can achieve at their best. Otherwise, this feels the filmmakers’ most frustratingly simplistic, reducing depths it regularly suggests down to manageable notions of good versus evil that fail to reckon with the insoluble complexity of the topic at hand.