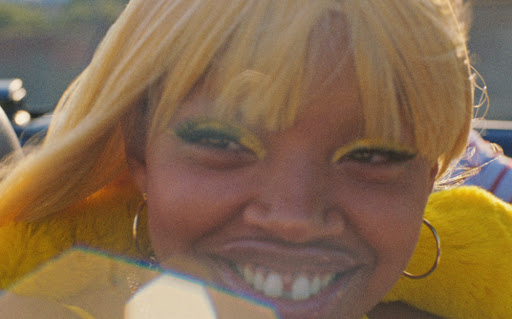 Goldie is fun, brisk and beautiful, and it features one of the most infectious star turns in recent memories.

Featuring model and reality television star Slick Woods in a star-is-born leading role, Goldie is the kind of performance-driven indie that too often slips through the cracks of film distribution. Dutch writer-director Sam de Jong’s film is primarily a vehicle for Woods, but it also distinguishes itself in both its presentation and its attempt to show a different bildungsroman than we’re typically presented with in cinema. That said, though the components resist the stereotypical, the story sticks a bit too closely to the tried-and-true coming-of-age formula.

Goldie’s titular heroine is an 18-year-old New Yorker who lives in a community center with her mother, Carol (Marsha Stephanie Blake), and her younger sisters Supreme (Jazmyn C Dorsey) and Sherri (Alanna Renee Tyler-Tompkins). They’re all squashed together in a small room along with Carol’s boyfriend, Frank (Danny Hoch), leaving little room for privacy and providing a lot of fuel for dreams of escape. Goldie, who dreams of being a hip-hop dancer, is in constant motion, making her living arrangements all the more untenable. De Jong and Woods do a particularly good job of showing Goldie to be a creature of movement down to her core, as if it is in her DNA. This, along with the dreamy motions of the camera and bright pops of color, call to mind European cinema of the late ‘90s and early ‘00s. De Jong films ultra-realism in distinctly magical hues, and he’s helped in this pursuit by cinematographer Shawn Peters and costume designer (and frequent Safdie brothers collaborator) Miyako Bellizzi.

Bellizzi dresses Goldie in a number of barely-there outfits, which, along with her tattoos and hair, make her appear more mature than the youngster we know her to be. The deceptive complexity of Woods’ performance is perhaps best exemplified by the moments in which she reveals Goldie’s youth; in moments where we fear for her safety or future, she weaponizes her radiant smile, which instantly shows us both her youth and her passion for life.

Goldie is worried about being separated from her sisters, making the need for her to realize her dreams of professional dancing all the more pressing. This leads to a number of illegal pursuits, acts which are all committed to give her the best appearance and best chance of “making it.” In these moments, Goldie truly seems like her teenaged self, reminding us of those youthful years when having the right outfit seemed absolutely necessary for self-actualization. And teenage materialism has rarely been as dazzling as it here in Goldie, as we watch our hero scheme to acquire wigs, sunglasses and a stunning yellow fur coat.

Like last year’s wonderful, underrated country music movie Wild Rose, Goldie allows our heroine to succeed just enough to keep us watching without slipping so far into fantasy that the film loses its emotional impact. However, de Jong does slide a bit too far into the conventional, and even clichéd, as he tracks Goldie’s journey, and it would have been more effective for him to perhaps consider ways to surprise us. Perhaps it is because Woods’ Goldie is so likable that we’re tricked into expecting more out of her than is realistic, but it would have been nice for our dreams and expectations for Goldie to have played out in more surprising fashion.

Still, Goldie is fun, brisk and beautiful, and it features one of the most infectious star turns in recent memories. Star Slick Woods and writer-director Sam de Jong are surely both destined for great things, and Goldie serves as a truly exciting cinematic introduction for both of them.