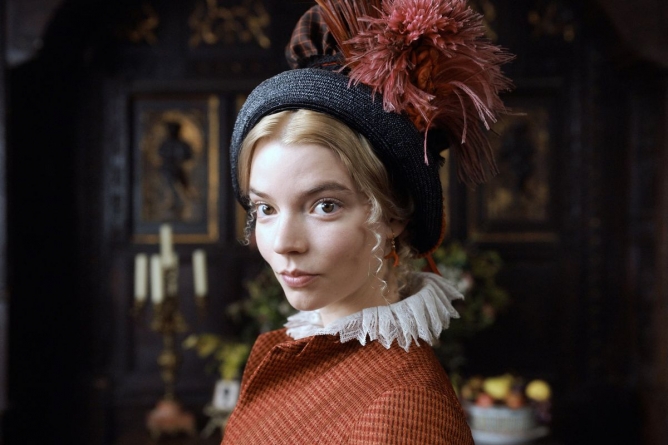 Emma. is another in a recent spate of films bucking convention in the period piece space, cementing both its director and its leading lady as ones to watch.

Jane Austen’s novel “Emma” is many things: a witty romance, an interesting exploration a class, the literary flashpoint that eventually would lead to society’s modern obsession with step-sibling pornography. But it is also endlessly remake-able. Here, acclaimed photographer Autumn de Wilde makes an eye-catching directorial debut, bringing the book back to life for a new decade with a modern eye and a period appropriate setting.

Emma. (with the aesthetic appropriate “period” in the title) owes more to Amy Heckerling’s brilliant ‘90s film Clueless, a contemporary take on the material that endured with its own cult classic status. Working from a script by novelist Eleanor Catton, de Wilde stages the story of Emma (Anya Taylor-Joy), a beautiful and well-to-do young woman with a dangerously inflated sense of self who, through a comedy of errors in her recreational dealings as a matchmaker, must come to know herself and the world around her better.

While this adaptation is set in the 19th century and has all the necessary trappings of period cinema, it feels modern and stylized in the way Clueless so effortlessly was. Yes, there’s a lot of horses and ornate architecture and absurd costuming, but de Wilde imbues the proceedings with a charm and vitality that belie what could have been a pretty stuffy endeavor. It’s there in the film’s color palette, its striking compositions and the somewhat fussy way the details of this world are realized. This is an absolute confection for the eyes.

It helps that Catton’s script is shrewd and sharp, brought to life by a cast of able performers. Taylor-Joy is a delight in the leading role, possessing impeccable chemistry with Johnny Flynn’s Mr. Knightley and Mia Goth’s Harriet. Bill Nighy is quietly hilarious as Emma’s father, with Miranda Hart stealing many scenes as the humorous but sympathetic Miss Bates. Each cast member makes the film’s banter work, whether in its lighter moments or some of the later revelations that require an unsteady bit of pathos.

But if Emma. has a failing, it’s in the film’s length and pace. Contrasted with Whit Stillman’s brilliant and efficient Love & Friendship from 2013, itself a half hour shorter, this film hews closer to the glacial storytelling of the miniseries versions of Austen’s many works. At times, de Wilde’s deliberate pacing feels of a piece with Kubrick’s work in Barry Lyndon, acclimating the viewer to a time and place so distant from their own.

But somewhere in the second act, the film begins to feel less like the smart and engrossing comedy it is and more of an endurance test to see how long we really want to spend with these characters as an audience. It’s a minor miscalculation that doesn’t make the film a failure, but it holds back on the replay value and amiability the entire picture otherwise possesses in spades.

If nothing else, Emma. is another in a recent spate of films bucking convention in the period piece space, cementing both its director and its leading lady as ones to watch.