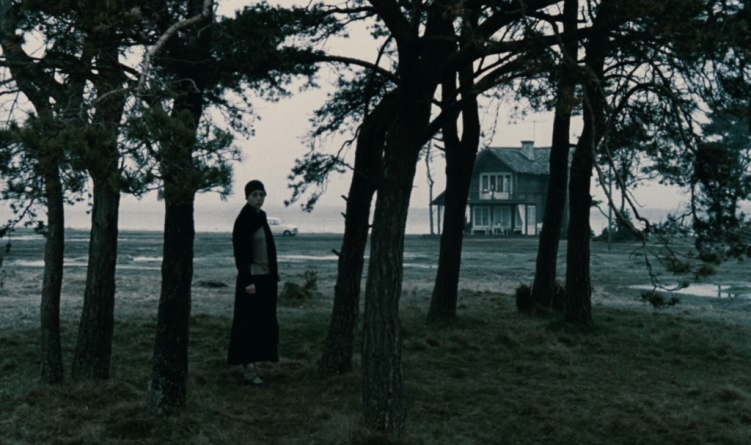 It’s fitting that Tarkovsky should end his career on the paradoxically hopeful image of a man watching his world disappear.

The Sacrifice, Andrei Tarkovsky’s final film, is less a benediction than an exorcism. Though possessed of the same calm movement and patient observation that defined the director’s cinema, its apocalyptic framing gives electric, and even erotic, charge to the usual preoccupations with faith and existence. Filmed in Sweden with regular Ingmar Bergman collaborators Erland Josephson and cinematographer Sven Nykvist, The Sacrifice certainly recalls the existentialist Swedish director in both look and theme, but Tarkovsky’s own perspectives on similar questions of faith are evident from the start. Josephson plays a retired writer and actor named Alexander, who is introduced planting a tree in the field by his seaside home alongside his young son, Little Man (Tommy Kjellqvist). The tree, fully grown yet completely skeletal and dead, is suffused with potent Bergmanian symbolism of rot and stasis, yet Alexander plants the glorified stick with optimism, regaling his child with a story of a monk who climbed a mountain each morning to water a similarly withered tree, only for it to finally blossom after years of dedication. Even in the face of despair, Tarkovsky finds hope.

As he did in Nostalghia, the director walks a fine line between extending his usual thematic ruminations while critiquing the egotism that undergirds them. As Alexander, Josephson plays what could almost pass for a parody of both Tarkovsky’s and Bergman’s philosophically minded protagonists. Compared to the sensual, empathic feelers of Tarkovsky’s prior characters and the mirthless contemplation of Bergman’s central figures, Alexander is, true to his past as a performer, a natural-born ham, always seeking attention. As he tells his child the lovely parable of the tree, Alexander gets sidetracked with his social preoccupations, suddenly going off on a long, discursive rant about modernity and how mankind has lost its way. In the same long take that places the man and his son in extreme long shot as they plant the tree, Tarkovsky gradually reorients the composition as they walk off deeper into the field to slowly push in on the characters as Alexander pontificates. Amusingly, Alexander comes off as insufferable as he rants, and Tarkovsky subtly conveys how Little Man grows bored by his father and starts to drift off, eventually tackling his dad in an attempt to play.

This surprisingly lighthearted opening feels like a far cry from the alienation that pervades Tarkovsky’s cinema, and not even the fact that Alexander and his family live on a remote strip of seaside property surrounded by ocean on one side and a massive, empty, flat plain on the other feels like they are isolated from humanity. Things take a turn, though, when friends come over to celebrate Alexander’s birthday and their parlor-room discussions about life are interrupted by the sounds of jet fighters flying overhead and news reports of nuclear war erupting. In a flash, the tone changes, the good-natured philosophical banter and amusing attention-seeking of the protagonist replaced by bourgeois panic that ripples out from the gathered guests.

In this turn toward fear and muted bewilderment, the film momentarily trades Bergman and even Tarkovsky himself as dominant reference points for something closer to the spirit of Luis Buñuel. Alexander’s home has the spartan décor common to Bergman interiors, but Tarkovsky emphasizes the claustrophobia that arises from the spacious rooms as guests nervously pace around. In one gorgeous, surreal shot, everyone sits around the ovular dinner table and turns backwards to face a TV that is in the recesses of the frame that flickers with a ghostly white emergency broadcast, casting a pale, pulsating glow over the completely still party. Like The Exterminating Angel or The Discreet Charm of the Bourgeoisie, The Sacrifice mines the ample domestic space to highlight the ways that order breaks down when the freedom of movement is denied to those who’ve never experienced external restraint, especially Alexander’s wife Adelaide (Susan Fleetwood), who collapses into screaming fits of terror over the possible fate of their son.

The breakdown of civility and reason is also communicated in the abrupt clash in religious views and the explosion of retrograde paranoia directed at Alexander’s maid, Maria (Guðrún Gísladóttir), whom several peg as a witch owing to her odd behavior and dress. Particularly affected is Alexander’s friend Otto (Allan Edwall), the local postman who had a friendly debate about religion with Alexander at the start of the film. In that conversation, Otto defended religion and concepts of absolute truth to a more skeptical Alexander, yet the chaos of war induces change in both men. Alexander drops to his knees as the prospect of nuclear annihilation looms and prays to God that he will give up everything he has, including his family, if God would spare the world hellfire. Otto, meanwhile, lapses into some kind of pagan fervor in which he attaches to the idea that Alexander must sleep with Maria in some kind of erotic ritual.

Intriguingly, Tarkovsky gives both panicked reactions equal consideration. The director and Nykvist play up the horror elements of the turn toward war with a plunge into darkness, framing characters within the house in jagged chiaroscuro that often reduces an individual to the only visible object in the frame. And when Alexander agrees to Otto’s suggestion and sets off after a departed Maria, both people pass through a thick blanket of fog that momentarily renders the film in Gothic romance tones. Tarkovsky recycles the levitating moment from Mirror when the pair consummate their strange rite, which possibly works as Alexander awakens the next morning to a peaceful world where seemingly nothing happened. Sunlight, overcast even in the early section, now beams intensely and bathes the frequently desaturated film in warm, yellow textures.

Yet this turn toward positivity prefigures an unsettling end in which Alexander sets about keeping his promise to God, working to destroy all of the things he enjoyed in life to hold up his end of the bargain. There are numerous instances, in art and life, of the frantic attempting to make deals with God, but rarely has a film logically followed through on someone deciding to pay up for what seems a divine intervention. The film climaxes with Alexander setting fire to his home, which plays out in an extended take that sees Adelaide sink into despair and others attempt to restrain Alexander, ultimately leading to an ambulance called and orderlies haplessly chasing the man as he sprints to and fro around the field around his burning home. This finale, to the film and to Tarkovsky’s career, is as funny as it is mournful, a slapstick routine underpinned by the sobering reality of watching a man choosing to accept the punishments of Job rather than have them foisted upon him. In Alexander’s supplication to the unseen and unknown will of God is an echo of the film’s first images, a close-up on Leonardo da Vinci’s Adoration of the Magi, specifically framing the arm of the infant Christ reaching out to one of the gifts being offered by the wise men, who kneel in awe of the baby, unsure of what it wants or thinks but immediately accepting of its supremacy. The Sacrifice contains more chaos than any Tarkovsky film since Andrei Rublev, yet in its embrace of sacrifice of the will, even if that sacrifice is neither required nor desired, it finds a curious form of affirmation. For all of the spirituality of the director’s work, grace only ever comes from within, and never without great expense. It’s fitting, then, that Tarkovsky should end his career on the paradoxically hopeful image of a man watching his world disappear.