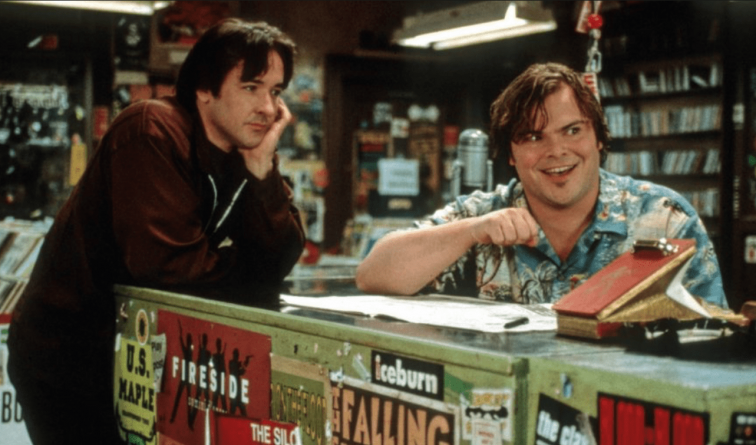 A quintessential breakup/makeup story strong on character development and ties to popular culture that are still relevant 20 years later.

While High Fidelity is again on the radar thanks to Hulu’s new series, Stephen Frears’ 2000 film adaptation of the Nick Hornby novel has remained popular as it moved from VHS to DVD to Blu-ray to streaming video. It’s a quintessential breakup/makeup story strong on character development and ties to popular culture that are still relevant 20 years later.

We meet the forlorn Rob Gordon (John Cusack) as his girlfriend Laura (Iben Hjejle) is moving out. Laura is an attorney who has moved into a corporate job and doesn’t see much ambition in Rob, who owns the ironically-named Championship Vinyl, a quirky but not terribly successful record store. This tiny, tragic empire precedes the vinyl revival, so Rob’s customers include only the most dedicated music listeners, devoted to a then-dying medium. The enthusiasm for vinyl today may make it difficult for Gen Z audience members to understand that the brotherhood of records was also a collection of outsiders.

Laura’s departure launches Rob into his top five breakup countdown, which has a theme, reflected in the opening monologue: “Did I listen to pop music because I was miserable? Or was I miserable because I listened to pop music?” These lists run throughout the film, appropriate for Rob and his record store compatriots. Jack Black’s breakout role as employee Barry Judd is the defining Jack Black style: loud, passionate, eccentric and lovable both because of and in spite of his overbearing tendencies. The store’s other employee, Dick (Todd Louiso), is an archetypal nebbish: timid and weak, like “Seinfeld”’s George Constanza or George McFly in Back to the Future. The playfully contentious relationship between Barry and Dick reaches a peak in their list of the top five songs about death, a convenient way to sidestep a difficult conversation after Laura’s father dies.

Among Rob’s other lists are top five side one, track one songs and his desert island top five, which ends up being a list of six. He abandons the desert island list after he comes to a count of six, then realizes he can’t properly narrow it down. The lists reveal not only Rob’s inner character but also the role that popular music plays when songs become deeply connected to our identities and our personal histories. The relationship between music and identity comes up again when Rob recounts former girlfriend Penny Hardwick’s top five favorite recording artists. Carly Simon and Carole King lead the list, and this is one of many instances in High Fidelity that attests to the habit of determining a person’s character based on their musical choices. Character revealed through music is a theme throughout the film and is often used for humor, particularly in the much-loved scene where Barry refuses to sell a copy of “I Just Called to Say I Love You” to a middle-aged man looking for a gift for his daughter’s birthday. Although he says the record is in stock, Barry defends his refusal by saying the song is “sentimental tacky crap” and sends the customer to the mall to complete his purchase.

As Rob works through his all-time top five most memorable breakups, he is also working through his relationship with Laura, much of this by direct address to the camera. His self-justifications about his role in past relationships are markers of a character type from the ‘90s: the misunderstood young man who had his run of troubles but has a good heart. The ‘90s saw a crisis of masculinity in which the hyper-masculinity of the Reagan era was questioned, ushering in a more sensitive kind of manhood. Rob Gordon is a poster child for the turn-of-the-millennium American man, struggling to understand not only himself but also the women who attracted his attention and interest. As the film comes to a close, Rob remains a work in progress. The good fortune he experiences is as much the work of the people around him as it is as a sign of his transformation. Cusack and his cast mates leave the audience with a feel-good film that transcends its cultural moment with a timeless story.

Linda Levitt teaches communication and media studies. She is a bibliophile and cultural critic who writes at PopMatters, Medium and in academic journals. You can find her online a lot of the time, especially on Twitter where her handle is @lindalevitt.