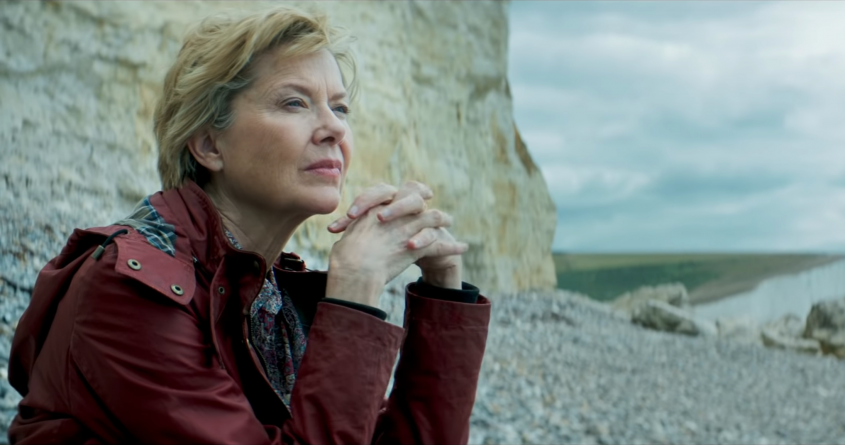 Hope Gap surprises in the depths to which it goes to prove itself more than capable of an honest autopsy of the slow dissolution of a marriage.

The uncommonly tender and honest romantic drama Hope Gap depicts a couple exiting its third decade of marriage when the foundation underneath them collapses. A husband suddenly realizes he wants something else. A wife faces embarking on that proverbial third act of life alone without any preparation. A son must become the middleman, assessing the damage and reassessing his own ideas about relationships. Writer-director William Nicholson allows each character their own opinion, method of coping, and reaction to the escape from a life of drudgery, and that includes the husband who wishes to part ways with his current life and move ahead with a new one.

In a pair of scenes shared with his son Jamie (Josh O’Connor), Edward (Bill Nighy) describes the process of falling in and, all these years later, out of love with his wife. Because Nicholson is exceptionally compassionate toward these characters, it gives Edward no pleasure, given that it comes after the end of everything, to recount the experience of meeting Grace (Annette Bening). It was soon after Edward’s father died, and Grace, a stranger at the time, comforted him in ways he could not fathom. Now, though, with the prospect of a new love, the feeling is different. He is convinced that he hasn’t given Grace the life he promised her.

With Angela (Sally Rogers), the connection is deeper than he ever meant it to be. Time spent with her feels fuller, richer, and more alive than it ever has with Grace, whose self-deprecating and often terse sense of humor was initially what attracted him to her. Grace is essentially inconsolable from the moment a shared breakfast becomes the end of their union: “Finish your breakfast,” she says; “I am finished,” he replies, and he certainly isn’t only referring to the meal. She adopts a dog, also named Edward, in a feeble attempt to fill the void.

In a subplot with Jamie, he reckons with his own shortcomings as a companion by thinking back on his parents’ shared life. While the thread is relatively inconsequential in dramatic terms, it’s a potent element that taps at certain assumptions we all have about our parents. We assume them to be happy – in marriage, in parenthood, and in their personal pursuits, and if these illusions are broken, it’s a kick to the stomach, like turning over a rock and finding something frightening.

Nothing here is easily dramatized or egregiously manipulative, and the actors make quite certain of that. Bening, who has adopted a relatively believable English dialect, excels as a clever woman who has been outsmarted by her own husband, who seemed, from afar, simply to be a man going along with the mundanities of his life. O’Connor’s performance might end up being buried by the draw of the two veterans with whom he shares screen time, but it’s an impressively nuanced portrait of a young man already uncertain of himself whose life takes a hard left turn at exactly the wrong time – which, of course, is also exactly the right time.

In his portrayal of an extraordinarily difficult character, though, it is Nighy whose turn should be remembered most affectionately. His remembrances are painful, clear-eyed, and true, and then there are the nuances he affords sequences that could have spiraled into uncontrolled melodrama, such a divorce proceeding midway through and a final confrontation between the two women in his lives. Nighy carefully navigates the emotional murk of the material, and in some ways is perhaps better than his movie. Still, Hope Gap surprises in the depths to which it goes to prove itself more than capable of an honest autopsy of the slow dissolution of a marriage.